Editor’s note: This article was initially published on July 24, 2017.  With the continued mayhem in Australia’s parliament due to the dual citizenship dilemma, we thought this would be a good moment to point out that Adam Piggott more or less predicted it, and has the perfect solution:

The last week has seen some extraordinary developments in the Australian parliament. Two senators from the far-left Greens party were each forced to resign when it was discovered, (the first case in a search by a private citizen), that they were dual citizens, rendering them ineligible to serve in parliament under the terms of the constitution.

But it gets even more amazing with a former Greens senator who served for over a decade in parliament now admitting that he held dual citizenship for the entire period. And the leader of the Greens is now under scrutiny as he is being asked to provide documentary evidence that he does not still hold Italian citizenship. From The Australian:

“Greens leader Richard Di Natale is scrambling to produce documents showing he correctly renounced his Italian citizenship before entering parliament after his two co-deputy leaders were forced to resign after failing to conduct proper checks.

“As Malcolm Turnbull hit out at the party’s “incredible sloppiness”, The Australian has learned Senator Di Natale, the son of Italian ­migrants, and Tasmanian Greens MP Nick McKim, who was born in the United Kingdom, are awaiting official documentation to prove they are not dual nationals.

“Under the Constitution a ­person who is a foreign national is incapable of being elected.”

At this rate the Greens will be lucky if they’re left with a roll of toilet paper in the dunny, let alone any serving parliamentarians.

Is it a coincidence that every politician caught up in this citizenship racket is a member of a party that are avowed socialists? Could there be some kind of correlation between having no appreciation for the customs and culture of the country in which you reside and supposedly represent, and the fact that you were born overseas? Dual allegiance is divided allegiance, but even more than that one cannot have any depth of knowledge or understanding of the crucial cultural factors that underpin a nation if one was not brought up in that culture.

Even though some of these politicians moved to Australia when they were children it is still indicative of this crucial shortcoming as the households in which they were raised were not typical Australian households. They were households of foreigners.

But it gets worse.

It turns out that there are no less than 27 sitting parliamentarians in the present Australian parliament who were born overseas and who potentially hold dual citizenship. 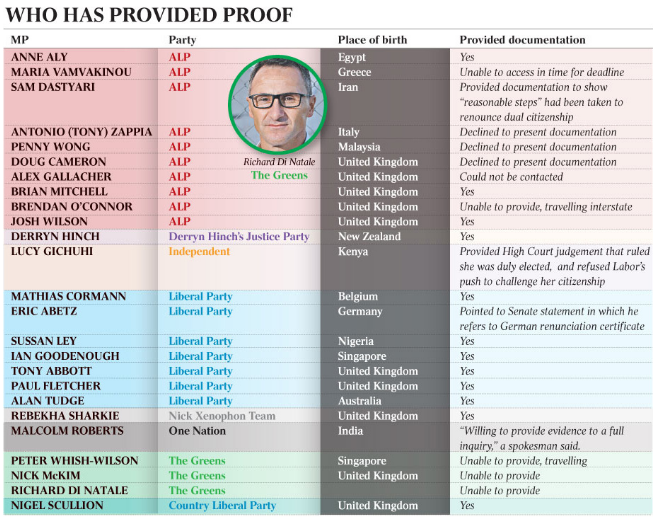 Even Tony Abbott makes the list. We had a former prime minister who was not even born in this country. If you want one reason why all of our political parties have lurched over to the left in the last 20 years and in the process abandoned traditional Australian culture then this list here should be exhibit A for the prosecution.

I am astounded at the sheer gall and effrontery of people who immigrate to a nation and then stand for parliament. Who are you to represent the people that took you in? Keep your head down, your big mouth shut, and your eyes and ears open, and try to absorb as much of your host culture as you are able. I would no more seek to stand for Dutch parliament at some point in the future as I would don a dress, smear on some lipstick, and attempt to use the ladies bathroom.

As far as I am concerned our constitution has fallen short. It is not enough to be a citizen of this country; you must have been born and raised in this country to vintage Australian stock. You must have been brought up in a typically Australian household, where you grew up at the beach or in a distant wheat field paddock, played cricket against a corrugated iron shed, kicked a footy around a muddy oval, got into a fight at your local bachelor and spinsters ball, got up at dawn to cast your hand lines into your local river on school holidays, rode your pushie almost before you could walk, helped your dad erect a backyard shed with a little space for your own set of tools, and cooked abundant amounts of snags on numberless summer barbecues.

We have 27 parliamentarians who are nothing but #Fake Australians, and yes I class Abbott and Malcolm Roberts in that list because to do otherwise would be completely hypocritical. They should all set an example and resign and then we need to have a referendum and change the consitution to reflect the ugly reality in our nation that almost 30% of the population at this moment were born overseas.

No citizen shall be eligible to stand for parliament if he was not born in Australia to third generation Australian parents.

That ought to fix a bunch of our problems right there.

Photo by The Victorian Greens