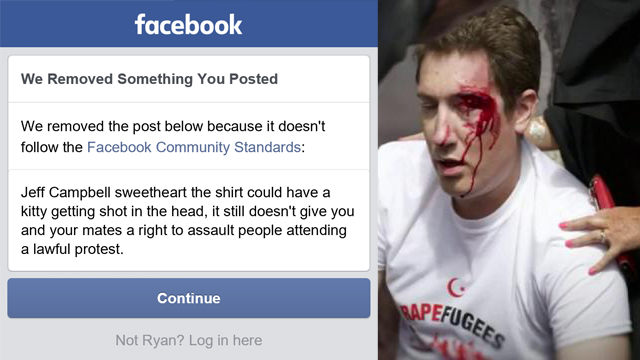 Usually I abstain from providing a commentary about the bullbaiting that transpires on Facebook, however on this occasion I couldn’t help myself.

Yesterday on the Facebook page for Shaun Micallef’s MAD AS HELL (a program on their ABC) a video was posted of a skit satirizing protesters opposed to Islam as masked thugs (here’s a link to the video on their YouTube page).

No face coverings with me Shaun Micallef’s MAD AS HELL other than my blood (handiwork courtesy of the Trades Hall terrorists called ANTIFA). But what am saying, this is their ABC I’m watching.

The comment was accompanied with a photo of me after the ANTIFA assault (as can be observed in the above image). Naturally it didn’t take long for an ANTIFA member to respond. Jeff Campbell, a familiar faceless ANTIFA troll, replied:

How sad for you. Maybe it was the t-shirt you were wearing?

To which I replied:

Jeff Campbell sweetheart the shirt could have a kitty getting shot in the head, it still doesn’t give you and your mates a right to assault people attending a lawful protest.

Apparently informing Leftists that assaulting people expressing a contrary view is wrong and illegal, has been deemed a comment crime by the Facebook admin.