It is a difficult thing for a man to face himself one day in the mirror and realise that, regardless of the delusions and aspirations he has held in his breast until time revealed them as false, he is a failure. This, of course, can be a liberating moment; but it is always a painful one. It may be that he had hoped to be a professional athlete, but after years of trying he faces himself and swallows the bitter pill that this will never happen. Perhaps he hoped to reach six feet, but at 20 finally accepts that he will always be 5 foot 10. As Ned said, such is life.

In Australia, the benchmark for male adult success is ownership of a family home. No matter what else, if you managed to buy, pay off and own a home for the littlies to play background cricket in then you’re a successful adult. The American dream is to build a transnational corporate empire; our Australian dream, until recent times, was much more humble. It was to own a family home. 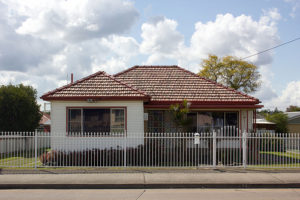 By this metric I have had to face the painful, bitter and hopefully liberating truth that I am a failure. I’m nearly forty and I have never owned a home. I haven’t owned an apartment, a bedsit, or even a private car parking space. I have no castle; and without such I will never be a king.

We will never be able to mark the kids’ heights on a doorframe or plan a patio the way we want it. We would love to have dogs and plant a food production garden for the hard times we think are ahead. Neither of those are possible when you’re moving in twelve months.

I know that many older Australians reading this will immediately dismiss me as an entitled whinger. That’s fine, I’ve heard it all before. ‘Just buy! Rent is dead money.’ ‘You’ve got to start somewhere. We lived on milk crates when we bought our first house for $20,000.’ ‘You kids have had it too good’.

The thing is, Boomers, I consider interest repayments dead money, too. Everyone knows that the reason Australians are so house-horny is because of a massive boom in land values from 2000-2008, then again recently in the major capital centres. The house price-to-income ratios that you had back when you were my age in the ’80s and ’90s were far easier to pay off than they are now, even despite the higher interest rates you paid. And as I always respond to such Boomer tut-tutting, how do you know interest rates won’t hit 17% again? If they do, there’s no house in urban Australia that my wife and I can reasonably afford.

Also, that year or two you spent living on milk crates was in your early 20s. So did we, but we were share-housing during our studies. As we started to launch and got professional jobs, we watched housing affordability flee to the horizon while you cheered at how rich you were becoming and goosed the process with support for negative gearing, home owner grants and whatever else you could vote for that made you feel richer. That process, more than any other, made this country the socialist gerontocracy it has become.

Your capture of the political process only exacerbated your economic privileges. I’m sorry Boomers, but I have a harsh truth for you as well: You’ve turned this once-vibrant nation into an 8-million-square-kilometre nursing home in which the young serve the financial interests of the old. Our role in this economic system is to be your economic carers while you hand the place to the Chinese. No thanks.

Like many other young and middle-aged Australians, my wife and I are thinking more and more seriously of jumping ship and moving overseas. We were not born to toil, homeless, to pay the taxes necessary to see you lot off in the affluence to which you have become accustomed. See you in the comments, I guess.

As for younger Australians having had it too good, I’ll concede your point there somewhat, but with a caveat. It’s true that consumables, luxuries and travel are much cheaper for the younger generations. You had some privations early on, it’s true. You had to lay-buy, you made your work clothes for your first job, you had to save for months for your first washing machine. Sure. Despite this though, the things that matter more to us as we get older were extremely cheap for you Boomers. Yes, you couldn’t afford international holidays in your 20s or Baccarat kitchenware in your 30s, but you got a house within a few minutes of the city that you could pay off with your wife working part-time while the kids were little. You could have a stable family life that made you a somebody. You could wash your own car in your own driveway chatting with neighbours you’d known for years. You weren’t a serf mowing another man’s lawn.

You had substance, at least until the Marxists got in your wife’s and kids’ ears and she divorced you and they became gay cretins. That’s another story, though.

My wife and I calculated recently that, between the two of us, we have moved 27 times over the years. This is not uncommon for our generation and for those younger than us. We also have what are considered pretty good jobs – the types of jobs for which you study for years and delay family formation in the hope that you will do better over the long run. Most days we wonder if that is still the case.

For our own son, still a toddler now, I will advise him against seeking economic security through formal education and a professional career. Much better to be an owner than a worker in this life, son, no matter how high-status your employment position is meant to be. Wagery is slavery. Screw doing a PhD like papa. Start a business and be a boss.

For those older Australians who have not been tenants for decades, you really have no idea what it does to a family’s culture and mindset. You are made very aware of your second-class status in this country when you rent. You will be swindled, talked down to, made to beg like a puppy and then pay through the nose for cleaning at the end of your tenancy. In this house-horny, reno-addicted real estate casino that Australia has become, that’s probably going to be at the end of every year.

My wife and I don’t even bother erasing the email alerts we set up for new rental properties any more. We know we’ll need them again soon enough.

Some landlords are decent people who see you as a valuable custodian of their asset. Many are not. A few years ago we had a foreigner landlord propose a 20% increase in the rent at the end of our one-year tenancy. We responded that this was outrageous and we would instead look for another apartment. He responded via a Post-It on the front door that he would be willing to keep the rent the same as long as he could move in with us. My wife actually shrieked when I told her his proposal. Needless to say, we moved.

At least half the time at the beginning of the tenancy the cleaning will be shoddy, although you know at the end of the tenancy you will have to pay a professional to do a ‘bond clean’. The one we paid for last week cost us $1100, including carpets. This was the lowest price we could find.

We seem to live in a time now when everyone everywhere is getting angry about something. The root of my anti-establishment rage, if I am honest with myself as I look in the mirror, is the knowledge that we will work more and more as time goes on for less and less while never being able to afford a home. It is the lens through which all other disappointments and frustrations that come along are viewed. This is how revolutionaries are made. Or in my case, reactionaries.

At the end of the day, I’ve finally reached a point in my thinking where I don’t blame the Boomers anymore for the financialisation of Australian real estate and the economic fleecing of the young to serve the interests of the old. Market participants respond to incentives; it is the market creators who generate distortions and cronyism. This understanding is what has made me so anti-establishment. It was politicians buying votes, banksters seeking to farm the human cattle of this nation and unscrupulous developers engineering ‘land shortages’ (in Australia!) that has created the neo-feudal economy of 21st century Australia.

The promise of the New World was that all men could be kings on their own plot of land. God gave a whole world to Europeans to cultivate and to own. That promise has now disappeared. The same sinful greed that created the oppressive feudalism of late medieval Europe has now created the oppression of neo-feudal, bankster-owned postmodern Australia. It is not the king who takes our increase, but the financial oligarch at the top of the global banking pyramid who uses mortgages to farm the wealth of the planet. The early medieval serf gave 10% and kept the rest, enjoying months off every year. The postmodern serf gives 40% to the government to fund Boomer healthcare then 30% of the remnant to the banksters in debt repayments. Who is more free?

If nothing changes, my wife and I are now considering moving to Singapore in 2018. Although the cost of real estate there is also exorbitant, economic opportunities abound and lower tax rates make it much more likely that, in the long run, we can own a family home of some description. As I type this, surrounded by boxes that we will again spend our week off work unpacking and organising, a question keeps popping into my mind unbidden for the Boomer gerontocracy of Australia. Was it worth it? Did it ever really make you rich? Was the Australian dream that you made an obsession really all that it was cracked up to be, or should we have dreamed bigger?