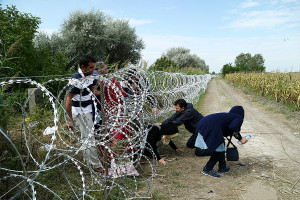 ed Nations for their strong stance on protecting the borders of their own country and having the unheard of audacity to actually control who does, and who does not, enter their own territory.

In a stunning outbreak of sanity, Hungarian leader Victor Oban made the following statement.

“I am speaking about God. I am speaking about culture and the everyday principles of life, such as sexual habits, freedom of expression, equality between men and women and all those kind of values which I call Christianity. If we let the Muslims into the continent to compete with us, they will outnumber us. It’s mathematics. And we don’t like it.”

We don’t like it! The magyars are magnificent. And sane. If the Germans want to stand and applaud their own invasion by young Muslim men who have crossed several borders en route to Deutschland and still claim, with a straight face and sense of entitlement, to be “refugees,” then that is for the Germans. The Hungarians, though, are not stupid, and certainly not stupid enough to be dictated to the UN and EU.