Like Bill Whittle, much of Stefan Molyneux’s best work was done during the Obama presidency and during the election campaign which saw the God Emperor Trump rise to power.  Both have continued to grow, with Bill Whittle presenting at NRA TV, and Stefan providing some shorter content to go with his usual long form programming.

In this video, Stefan admirably lets his guest do most of the talking, as his guest has a fascinating tale to tell. In short, he was once a member of Antifa, but has transformed into a conservative.

As usual with callers, Stefan takes great interest in the family background which led his guest into the far-left.  As usual, he was raised by a single mother.  He gives anecdotal evidence that most of the Antifa he knew came from single mother households, and Molyneux theorises that it is a trait whereby single mothers send out their programmed male sons to destroy the free market which could threaten their free money.

Honing in on the key points which led to his deprogramming from the Antifa cult, the guest details his progression via a series of disturbing events, generally involving the coordination of violence against activists who went against the party line, seeing his friends descend into outright criminality, and his eventual research into the writings, speeches and history of communist movements of the 20th century.

He notes that if you read the trials of Soviet dissidents in the 1920’s and 30’s, and you replace the term “class” with “race, gender and sexual identity”, you can see exactly the same thing happening right now in America.

This led to research into the works of key conservative thinkers such as Hayek and Chesterton, and an understanding that it is actually the right which promotes individualism while at the same time fostering strong communities.

The video finishes with the concern that civil war in America could lead to the deaths of hundreds of millions, but the hope that there may be a chance for de-escalation.  This case shows that while many members of the extreme-left are horrible people who just want to watch the world burn, some are good people who want the right things, but just have the wrong information. When given the right information, with the will for painful self-reflection, there is a chance to turn zombies back to humanity.

Perhaps there is even some hope for Rob Sparrow.. 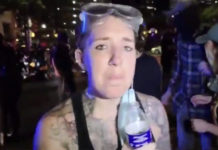