How does a President completely evaporate a ‘mostly bulls**t’ but extremely damaging Russian collusion narrative instantaneously and decisively, while simultaneously pleasing his base, and anyone with enough intelligence to realise that placing the deeply psychologically troubled on the front line where they can put themselves and others at risk maybe isn’t such a hot idea?

Ladies and gentlemen, the POTUS presents the nuclear option. Instead of remaining resilient and keeping the pressure on Donald jr. and Kushner (over their emails and testimony that may not expose anything illegal, and certainly don’t validate the fairytale that Russians, and not Crooked Hillary’s toxicity, were to blame for the greatest upset in political history) they have been fooled into moving their focus away from a scandal that had the potential to eventually bring down a presidency. 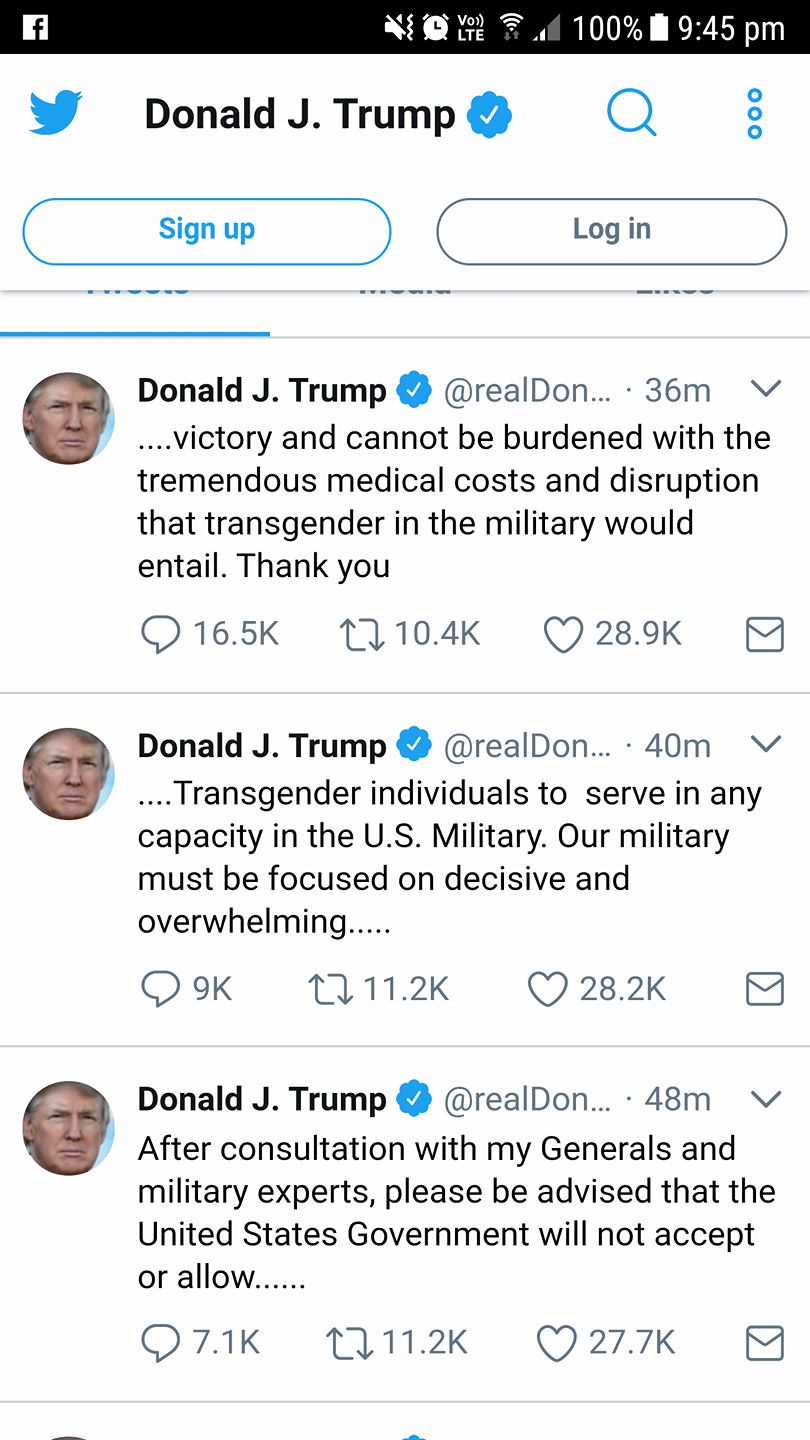 In a stroke of brilliance, Trump has made this problem go away, triggered those who were never going to give him any quarter anyway, and solidified and strengthened support among the base, the fence sitters, and most importantly the disillusioned who were wondering if they’d gotten behind a candidate who talked the talk, but was just like everyone else.

The God Emperor may not be able to hurl CNN and the rest of the partisan MSM to the lions as he wishes he could, but he has outwitted the yapping pack of dogs by throwing the bone of transgenderism to the back corner of the yard, while Donald jr. and Jared Kushner breathe a sigh of relief and lick their wounds on the front step of the house, where the Trump administration was hanging precariously in the balance.

By the time the media realises what has happened, it will be too late. We all complained about the relentless 24/7 Russia narrative of CNN, but that is what’s required to make mud stick and win a war of attrition when you’re the controlled opposition. Like the blitz of London, CNN gave up only weeks from doing a lot of damage.

They think that this is a bigger story. It isn’t. It may be, in the palatial home of Anderson Cooper, or at a dinner party attended by Wolfe Blitzer. Out in the real world of Trump’s America, beyond the online white noise of Buzzfeed, Huff Po, and Upworthy, nobody particularly gives a s**t about the transgender community, and is actually kind of tired of them.

Have you ever talked to one of these people or listened to one of them speak? Trump is a narcissist, but even he’s got nothing on these entirely self-absorbed victims of affluenza. They’ll never ask how you’re doing, or if you’re ok. It’s all about them and their adventures in surgery.

MSM media talking heads are already comparing this development to the black experience, in an attempt to stoke racial flames and exploit the African American community as muscle to make mentally ill white people feel better about themselves yet again.

If I were a betting man, I’d say the African American community will probably take the side of the blackest American President since Bill Clinton.

Few things are more insulting for an African American than being thrown in the mix with bored, affluent self-mutilated white people when (tired progressive identity politics aside) you’ve probably experienced more genuine hardship in your life, than a profoundly disturbed upper middle-class type who has decided to hitch their cause to your wagon. Dragging African Americans into this crazy narrative is the ultimate example of cultural appropriation.

CNN and others will realise that nobody is particularly interested in the same things that obsess them, and try to go back to Russia. It’ll be too late. The 24/7 media cycle is an unforgiving mistress. Trump is a master manipulator as Scott Adams laid out well before the election. He has played all of them effortlessly in 4D chess all along, and it seems that he has just taken their Queen!

Photo by The U.S. Army