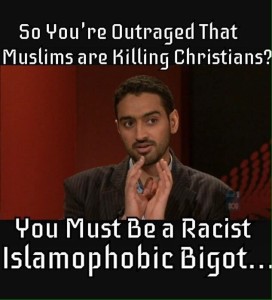 “Come on Waleed, let’s talk about Islam. You rarely do. Here are some conversation starters.

1. Is Mohamed the supreme example of a human being?

2. Does the Qur’an command Muslims to ‘obey Allah and the messenger?’

4. Are you a true Muslim if you reject the example of Mohamed and disobey the Qur’an?

5. Was Mohamed right to sexually abuse children, remember he married a 6 year old and consummated it when she was just 9!? Please don’t insult our intelligence by saying it was culturally appropriate. Was the prophet right or wrong?

6. Do you reject the example of the prophet or condone/excuse it?

9. Was Mohamed correct about gays being stoned, thrown off buildings or beheaded – or was he wrong?

10. Do you reject the verses in the Qur’an that explicitly call for Muslims to strike at the necks of unbelievers and cut off their fingertips? Did Allah get that wrong?

11. Is a true Muslim meant to take the Qur’an literally? Are they able to pick and choose the bits they like? Can a Muslim actually determine what Allah or Mohamed got right or wrong?

13. Was Mohamed ever wrong?

Then we could talk about beheading 800 Jews, taking slaves, punishing apostates, dhimmitude, stoning adulterers, the inferiority of women and so much more….What about the OIC nations? Have they all misinterpreted the Qur’an and example of Mohamed too? Will you Waleed, condemn the Sharia Law practices of Saudi Arabia, Pakistan, Iran and Iraq?”

We at the XYZ look forward to Waleed Aly engaging in the conversation about Islam, rather than his usual practice of cherry picking facts and avoiding issues. Mr Aly was after all, head of public affairs for the Islamic Council of Victoria, and it seems that this is a role that he still takes to heart, using spin to present Islam in the best possible light and avoiding the tough questions, using whatever means possible.

The XYZ issued its own question to Aly several months ago, which remains to be answered. Earlier this year, members of Aly’s television show gushed their support for same sex marriage, yet Waleed Aly remained unusually silent. Tell us Waleed, do you support same-sex marriage?

Intriguingly, Waleed Aly does not have his own social media presence, which is highly unusual for a celebrity of his profile. Not a bad way to avoid criticism and curtail engagement with important issues.

Christianity has been subject to exactly this kind of critique for centuries, and rightly so. It is time for Islam to be brought under the same kind of scrutiny.

Waleed Aly – it is time get off your safe and protected soapbox and engage in discussion and debate with your fellow Australians.