Tony Abbott’s final speech as Prime Minister, to a packed parliament house courtyard, was typical of the man many have known in private. Almost without exception, the private Tony Abbott is highly personable, loyal to a fault, and of unquestioned decency. He was never able to effectively bring this highly likable and attractive persona into the public realm, and so constantly failed to cut through in his messaging and appeal to the punters. A feral media, only too keen to paddle about in the Twitter sewer of hatred, certainly did not assist, but that is the lamentable present state of political discourse in the digital age.

Nonetheless, Tony Abbot exited stage left as Australia’s 28th, and short serving, Prime Minister, with his dignity intact. Thanking all the right people, and giving sincere undertakings not to background, leak, or act detrimentally against the man who has now replaced him, Tony Abbott gave a fulsome display of the qualities of loyalty and decency so prominently lacking in the public arena today, and for which he will surely be remembered.

A word cloud of the now former Prime Minister’s final speech, a speech which was partly drowned out by the idiocy of channel seven in locating a news helicopter directly above the exterior courtyard, points to the qualities by which Tony Abbott governed, and which have always informed him as both a person and a leader. Prominent are words such as people, service, thank, and, largest and most prominent of all, country. All of this was gathered up in the final, fitting sentence, Tony Abbott uttered as this nation’s Prime Minister – “My love for this country is as strong as ever and may God bless this great Commonwealth.” 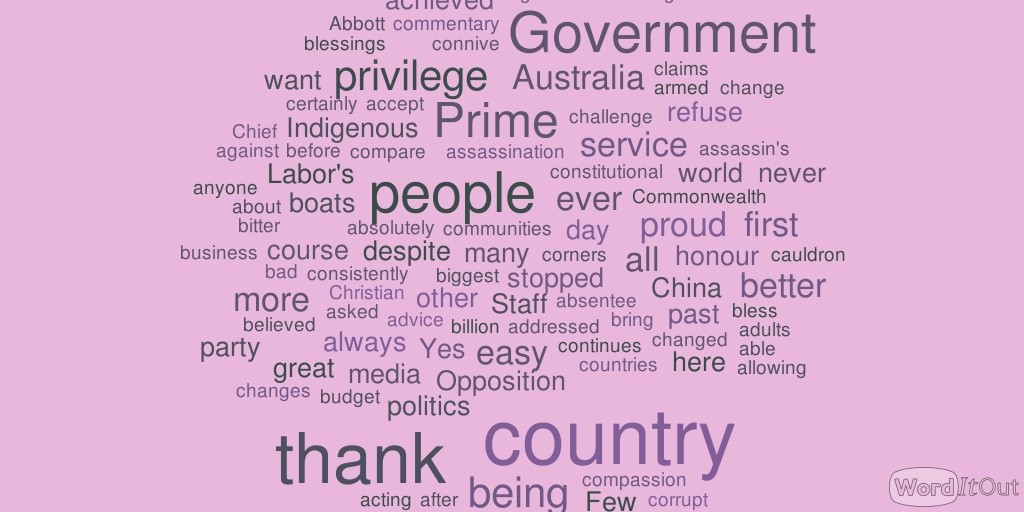