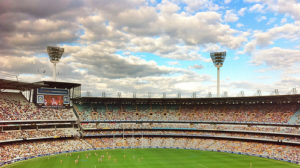 There simply wasn’t any choice, in a city where babies from my background are usually anointed with team colours in the crib.

I remember many weekends being taken as a toddler to one of the last old suburban grounds in Melbourne by my father, who held me up so I could see.

I recall another day sitting on the old wooden seats at Waverley Park with splinters sticking into my bum as we unwrapped the sandwiches, lovingly prepared by our mother.

I remember many cold winters in the gathering darkness outside the MCG playing amongst the trees in the dying ebb of the afternoon, trying to find a car amongst the mud.

Most of all I remember watching the ANZAC Day game for the first time after leaving the Army. I had never been able to attend while serving, and during the minute’s silence as near one hundred thousand people stood for the bugle, I couldn’t stop myself from crying.

For many Australians outside the barbaric northern hinterlands of NSW and QLD, the native game is a part not just of our culture but of our souls, our memories, a member of our families.

Even as I moved around the country for work and lived for many years amongst the strange philistines who somehow seem to prefer watching large sweaty Polynesian men attempt a group hug, I maintained a special place deep in the depths of my heart for the home-grown game.

But over the years, despite the triumphs and pitfalls, despite my enduring affection, I began to notice just how badly the stewards of the sport were corrupting that which is arguably one of our country’s most powerful cultural institutions.

And I don’t mean any drama over drug cheats; I don’t mean the loss of the suburban grounds or the increasing corporatisation, the mercenary implications of free agency or the absurdity of a team in Western Sydney.

I mean the fact that social engineering scumbags couldn’t even let people have the escapism of sport without trying to turn it into a platform for leftist propaganda.

The way that the entire football media and administration turned on their own fans during the time when malicious, racist bully Adam Goodes was being justly booed by every right-thinking fan, whatever their ethnic background, after he tried to set a lynch mob on a twelve-year-old girl, shocked me. I had no idea that the rot had gone so far.

Only the wise old fool Sam Newman seemed willing to stand up to the mob of self-righteous virtue signallers parading their twisted morality, the last sane man in an increasingly insane world.

Every new set of leftist virtue signalling chipped away at my morale. But it wasn’t until I saw that the AFL had teamed up with our very own leftist cuckoo Malcolm Turnbull to advertise for taxpayer-funded young Muslim activists to monitor the AFL from the inside for signs of political incorrectness, that I knew my long held love affair was dead.

It is a perfect example of corporations joining government to push an agenda on their own customers, taxpayers and voters.

When Andrew Demetriou, the slimy and obese former CEO of the AFL, was finally thrown out via a very heavy golden parachute, many of us had high hopes that his ideologies had gone with him.

The fact that his frog-eyed successor Gillon McLachlan raised a rainbow flag at AFL House this week and has instituted a “pride” round to celebrate the wonder that is Homosexuality, complete with rainbow goal-flags, rainbow player numbers and rainbow socks, has put paid to any forlorn hope that this game that has given so much joy to so many will ever again be free of political propaganda.

I have lived in NSW and QLD, amongst sports fans in those states; probably the only thing you could do to make Aussie Rules LESS attractive is to openly associate it with homosexuality.

Growing the game in these states, and in the process growing the prosperity of the game, seems to take a back seat to the endless promotion of leftist causes and favoured victim groups.

The same people who were willing to sacrifice grassroots traditions and suburban grounds in the name of profitability are quite clearly willing to risk that same profitability in the cause of leftist posturing.

Gillon has said that he wants to “Start a conversation”, but it’s pretty clear he only wants the conversation to go one way:

AFL boss Gillon McLachlan says he will not tolerate the game “being used to vilify” sections of the community.

CEO Gillon McLachlan says booing has no place in the AFL.

If you boo Adam Goodes, you’re a racist: Gillon McLachlan.

AFL boss Gillon McLachlan said the footy was no place for political messages.

And in the process they will destroy it.

Like an old lover who’s now gotten old and grey, I think I’ll try and remember my once favourite game as it was, rather than as it is.

But I will never forgive the soulless drones who seem to make it their lives’ purpose to suck the essence out of anything worthy or worthwhile in a society, replacing it with a megaphone that bleats their own tepid, ignorant platitudes back to them.