Consider the absurdity of Western foreign policy since the end of the Cold War. With no major conflict between European powers the neocons had to give our nations’ best something to do, so they set them the impossible task of stopping non-white people from killing each other.

Considering America and Russia have enough oil between them there was never a good economic reason for intervention in Middle Eastern conflicts, and given Israel did 9/11 there was no good military reason either. (Hang on….) The internal conflicts which have occurred in the West and in Russia have often been because of the existence of foreigners on Scythian soil, and for some reason our media, and NATO, generally decided to take the side of the foreigners.

The case for military intervention in Africa is even more ludicrous. Unless intent on a genocidal war of recolonisation, we should never let a Western soldier set foot in Africa. Instead we devote hours of energy, billions of dollars, and we construct elaborate institutions to try to stop them from doing what they have always done. Ponder why the Dutch settlers found a practically deserted West Cape to colonise in 1652.

Then, certain people insisted we should bring Africa’s inhabitants here. Let’s see how that’s working out for us. 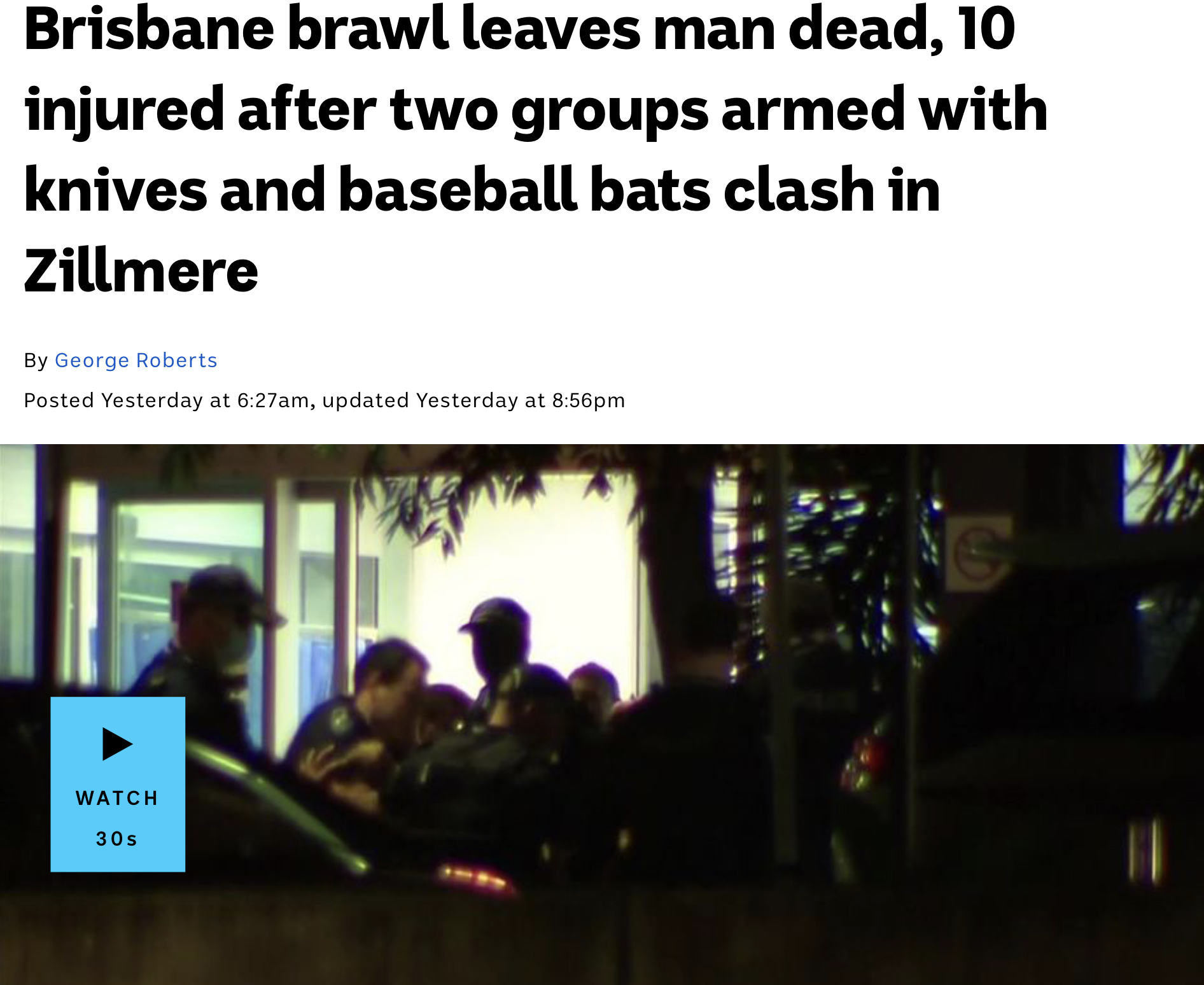 A man has died and another 10 people have been seriously injured after a violent brawl in Brisbane’s north overnight involving knives and baseball bats.

Police said a fight broke out between two groups at O’Callaghan Park in Zillmere about 5:30pm yesterday.

Girum Mekonnen, 19, died at the scene, while 10 others were taken to the Royal Brisbane and Women’s Hospital.

“We believe knives and baseball bats were used in that attack,” he said.

“We know at least one young man has died and there are about 10 other people who have been hospitalised as a result of that incident.

“I’m concerned this incident is the result of a retribution amongst these people for an incident that happened earlier this week in the western suburbs of Brisbane.

“A group of people left the western suburbs of Brisbane yesterday afternoon and came to Zillmere, with an intent of having a confrontation with another group.”

Detective Superintendent Fleming said he was concerned there could be further violence.

“What we would ask is for the community to remain calm,” he said.

“We are doing all we can to investigate this and hold people to account for the level of violence that happened.

“We are active right across South East Queensland now to ensure we don’t have a repeat of this.”

What he really means is that he wants native Anglo Australians to remain calm. They can deal with Africans killing each other and brutalising the native Anglo population. What must not be allowed to occur is native Anglos rising up against the globalist controlled government.

It must be a serious concern for the authorities. Government’s primary task is to keep people safe. If they can’t do that, their job must be brought into question. 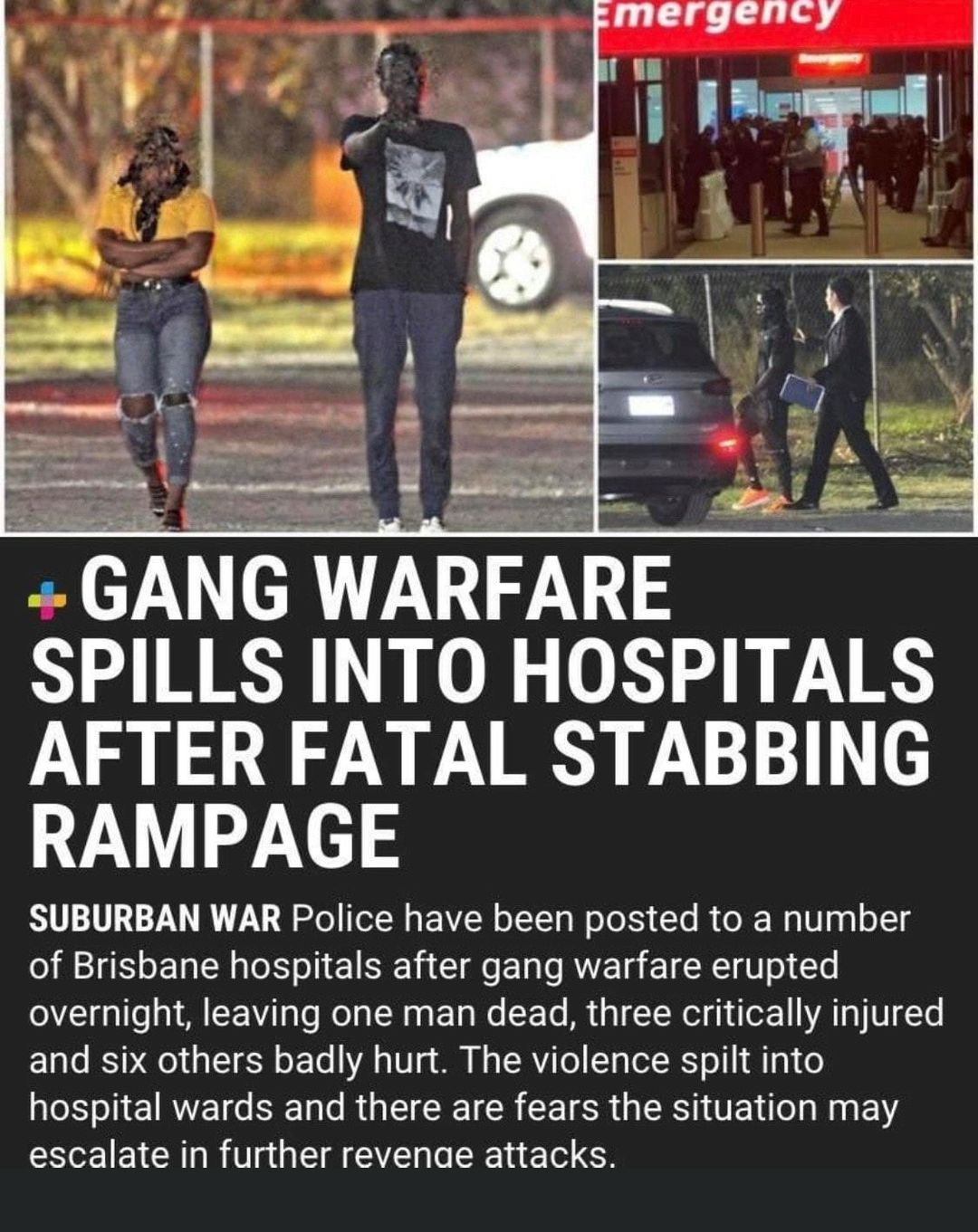 And Aussies in Brisbane’s suburbs clearly do not feel safe:

“[They were] quite loud and with sticks in their hands, [so] I locked myself inside and the next thing, sirens everywhere, so I came out to have a look.

“We don’t walk in that park, because of that, we’re a bit scared of what goes on down there.”

Detective Superintendent Fleming said while there had been tensions between members in the African community, this level of violence was unexpected….

Local resident, Chris, said around 15 men were seen jumping out of cars in broad daylight.

“I was told there was someone on the ground who’d been stabbed in the stomach,” he said.

“I’m not scared, but it does disturb you.

“I just hope they don’t have more revenge attacks.”

Let’s make this clear though. The reason for opposing mass immigration from African war zones to Australia is not that the people will bring their conflicts here. Even if they were the most peaceful, the cleanest, the most intelligent people on the planet, importing them to artificially boost the building industry in order to keep Australia’s economy on life support would still be wrong.

Africans should not come to Australia, and Africans must go back to Africa, because this is Australia, and only Australians belong here. This is our land, not theirs.