The Syrian civil war is almost entirely the fault of the US State Department and the shadow oligarchy whose bidding it carries out. In fact, all the coups and colour revolutions from Ukraine to Libya and across to Syria and Iran, are the work of a State Department which is exercising unelected control over the might of the American empire.

By now we should all be familiar with the script, right?

“Weapons of mass destruction” used to be the go to, however this line of reasoning had made cynics of the Western populace so they have moved onto the “freedom” and “civil rights” angle. This is the narrative that explained the “Arab Spring” and the current narrative pushing an Iranian war (they’ll call it an intervention), hence that footage of a woman removing her hijab at a protest is being plastered on TVs.

Never mind that until that particular news report the hijab was celebrated as a form of feminine empowerment by leftists. Oh well, the narrative is malleable, don’t question it bigot, send your sons to the Middle East to die in our power games.

So the “freedom” and “civil rights” angle goes like this: the US State Department communicates with various disaffected, would-be rebels that they will support attempts to overthrow the present regime. This could be in the form of the US military enforcing a no-fly zone such as occurred in Libya, actively bombing the regime forces, supplying arms or enforcing arbitrary borders to prevent the regime from actually winning the civil war and returning to peace. The rebels then rise up safe in the knowledge that the US will not allow the regime to win. In Libya the absence of another power supporting the regime led to Gaddafi’s overthrow and unseemly end; “graphic video of his last moments shows rebel fighters beating him and one of them sodomizing him with a bayonet”.

What was Gaddafi’s mistake? He complied with the US and international demands to disarmament, (unlike North Korea…) so he wasn’t harboring Weapons of Mass Destruction like Saddam supposedly was. Depending on your view of the motivations of the State Department, it seems likely that Gaddafi’s main crime was threatening the petro-dollar alliance or that his control of Libya was preventing the flow of people from Africa into Europe.

There are two reasons why Assad hasn’t also been impaled upon a bayonet. The first is the presence of counterweighting powers, in the form of Russia and Iran. Second is that a majority of the American supported rebels in Syria got a little high on their own supply and instead of calling themselves some “1984-ish” name like the Syrian Democratic Forces, they called themselves ISIS and generated way too much blowback with their nefarious deeds for the US State Department to sell them as the “good guys”. 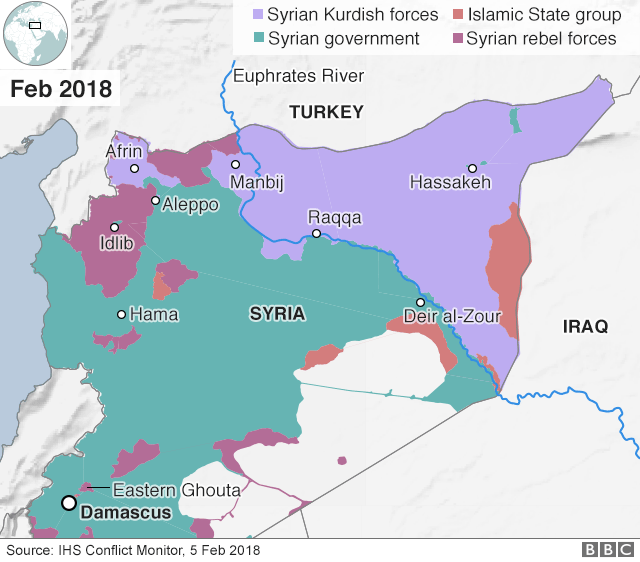 As you can see from the above map, the government is effectively in full control of Syria, except for the Kurd controlled (US supported) North-East. But the State Department still wants the civil war to continue, to justify their presence in the Middle East and because they hold on to hope that a larger intervention by US forces to topple Assad will be authorized. Therefore, the US forces are primarily there to stop the government forces from defeating the rebels and ending the war. They do this by enforcing the territory of the rebels and actively engaging the government forces when required.

A recent example of this:

“According to a coalition statement, its strikes were carried out after forces allied with Syrian President Bashar al-Assad “initiated an unprovoked attack” against a well-established Syrian Democratic Forces headquarters where coalition advisers were working with US-backed Syrian fighters.

“Some 500 pro-regime troops carried out the attack using artillery, mortar fire and Russian-made tanks “in what appears to be a coordinated attack on Syrian Democratic Forces,” US Army Col. Thomas Veale, a spokesman for the US-led coalition told CNN.

“Veale said that about “20 to 30 artillery and tank rounds landed within 500 meters” of the Syrian Democratic Forces headquarters before the US-backed fighters and coalition forces “targeted the aggressors with a combination of air and artillery strikes.”

“The US strikes were carried out by manned and unmanned aircraft as well as a US High Mobility Artillery Rocket System (HIMARS), two US military officials told CNN.
US F-22 stealth jets, F-15 fighters, and MQ-9 drones were involved in the counterattack according to US Air Forces Central Command. 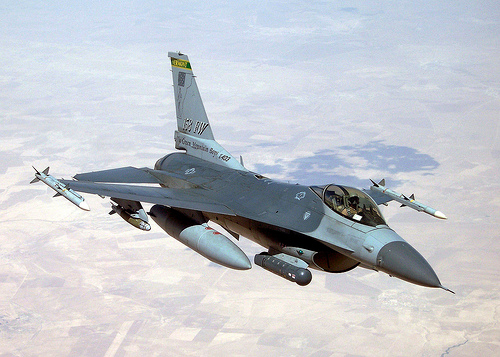 “We estimate more than 100 Syrian pro-regime forces were killed while engaging (Syrian Democratic Forces) and Coalition forces,” a US military official told CNN.

“This action was taken in self-defense,” Veale said, adding that pro-regime forces that returned across the river had not been targeted.

“Veale said no coalition or US personnel had been killed or wounded in the engagement but that one member of the Syrian Democratic Forces was wounded.

“Veale said the coalition suspected that pro-regime forces were attempting to seize territory, including lucrative oil fields, that the Syrian Democratic Forces had liberated from ISIS in September.

“They “were likely seeking to seize oilfields in Khusham that had been a major source of revenue for Daesh from 2014 to 2017,” he said, using the Arabic acronym for ISIS.”

This is literal insanity. Keeping the war going indefinitely is not just disastrous for Syria and the Middle East, it keeps the US in a permanent proxy war with Russia and Iran. This creates the conditions for a rapid escalation to a major power war. Couple this with the fact a similar proxy situation is developing in North Korea, with South Korea being supported by the the US and the North by China.

US foreign policy is schizophrenic because the internal controls of the American Empire are being fought for by various elected politicians, unelected factions, vested interests, the deep state and other competing parties. It’s needless to say, I don’t think that this permanent war footing is in the interests of the American people, so why does the American Empire invest so much blood and treasure in the prosecution of eternal war and disruption in the Islamic nations of the Middle East? 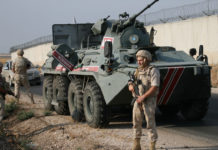