Is Andrew Bolt secretly based? I’ve been critical of him in the past given his statements regarding Blair Cottrell and other nationalists but he’s just produced an article taking the Left to task on race politics:

The massacre of Muslims in Christchurch by a white Australian racist should make the Greens ask themselves: do they have blood on their hands?

Right now, it seems the Greens are trying to profit from this horror by blaming everyone but themselves.

Leader Richard Di Natale says the media here bears “some responsibility” by spreading “hate”, and his Victorian Women’s Network accused Prime Minister Scott Morrison of having “blood on your hands”.

But shouldn’t the Greens — ultimate political peddlers of hate — examine their own conscience first?

What did Di Natale think would happen when his Greens promoted their toxic identity politics?

Damn right. Why is it acceptable for every race and/or ethnic group to show strong in-group preference and pride in their heritage but not Whites? Whites have ethnic interests just like any group, and denying this fact is dehumanising and creates second-class citizens based on race. The Left have spent decades telling us this is super-duper-double bad, yet their distaste for racial discrimination suddenly disappears when Whites are the victims.

He nails the Greens on their hypocrisy in the face of violence too:

Consider the recent rise of Left-wing violence, not least by Antifa, which almost seems the paramilitary wing of the green movement.

Former prime minister Tony Abbott was headbutted in the street by a Leftist, and I was physically attacked at a book launch by two masked Antifa supporters. People trying to hear speeches by libertarian Milo Yiannopoulos, Dutch politician Geert Wilders and conservative senator Cory Bernardi have been attacked by Leftists, including Greens supporters.

Meanwhile, a Muslim radical who ordered my killing has been jailed, threats from another Muslim forced me to evacuate my family from home, pedestrians outside my office need bollards for protection from terrorists, and guards were posted inside my office last week against potential Leftist extremists. 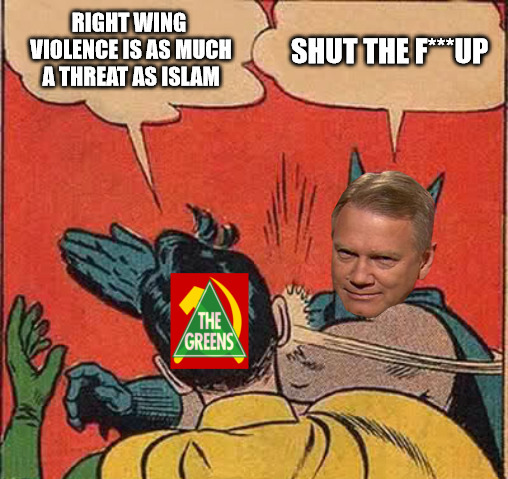 Andrew Bolt is right to call out their hypocrisy. If only more people would.

He did back his column up with a Bolt report editorial that involved calling Nationalists “losers” repeatedly but I’ll forgive him for now (he repeated his arguments about the Greens). The point remains, if every non-White ethnic group gets to have an in-group preference then so do Whites and you can’t be surprised when they express it.

The Greens, and the establishment ruling class in general, have spent years slandering and ostracising Nationalists and Patriots. They’ve now managed to get Lads Society, Nationalist Uprising and Avi Yemini permanently banned from Facebook but there were plenty before them (there will be more too). Must be a coincidence that this latest purge came the day Scott Morrison met Facebook executives, meh.

The net effect of this blatant political censorship won’t be to remove these views from society, quite the contrary in fact. People who hold these views will now be further isolated into echo chambers and will become even more dedicated to the cause and ultimate victory. That’s what happens when you mistreat people. Nationalist Whites are an oppressed class and Aussies love an underdog, we aren’t going anywhere and Facebook hurt only their own brand.

As for violence and the Leftist globalist establishment, the evidence is undeniably clear; it is not talking about issues that causes violence. In fact, allowing an open discussion is the very best thing society could do in order to de-radicalise the more isolated and aggressive among us.

No, what causes violence is censorship and isolation. This is a scientifically, psychologically and historically proven fact.

If the ruling class wanted to stop so-called “right wing” violence their actions since the Christchurch shooting have been the exact opposite of what they needed to do.

It really makes you think. 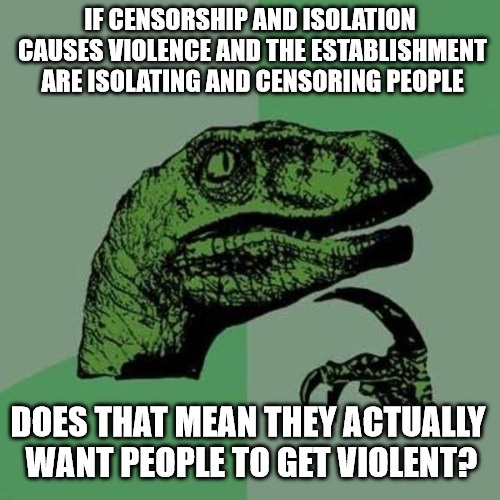