For as long as I can remember Australian policy makers have been trying to push migrants to the bush. I used to keep saying it will never happen but given the lengths the communist Victorian government is prepared to go to in order to ram through the construction of an unnecessary and unwanted mosque in Bendigo, without resistance our coastal elite may well succeed.

A steady stream of demographic displacement propaganda has always accompanied this national social engineering project. Bernard “Smashed Avo” Shaw has provided the latest example, along with an update on how the Great Australian Replacement is going.

“I have long thought that Australian cities and towns kinda cling together like the rock and bits of debris that form a comet.

“At the head of this “Comet Australia” is a cluster of big rocks — our biggest capital cities — flanked by smaller, but similarly configured, towns and smaller capitals cities. Falling in behind the comet’s head, and forming an elongated tail, is a series of even smaller towns, multiple villages and our sparsely peopled farmlands that all have a vastly different cultural composition to the big capital cities.”

Code for “the bush is still Aussie”.

He even provides a useful list of the most “cosmopolitan” cities and towns in Australia. 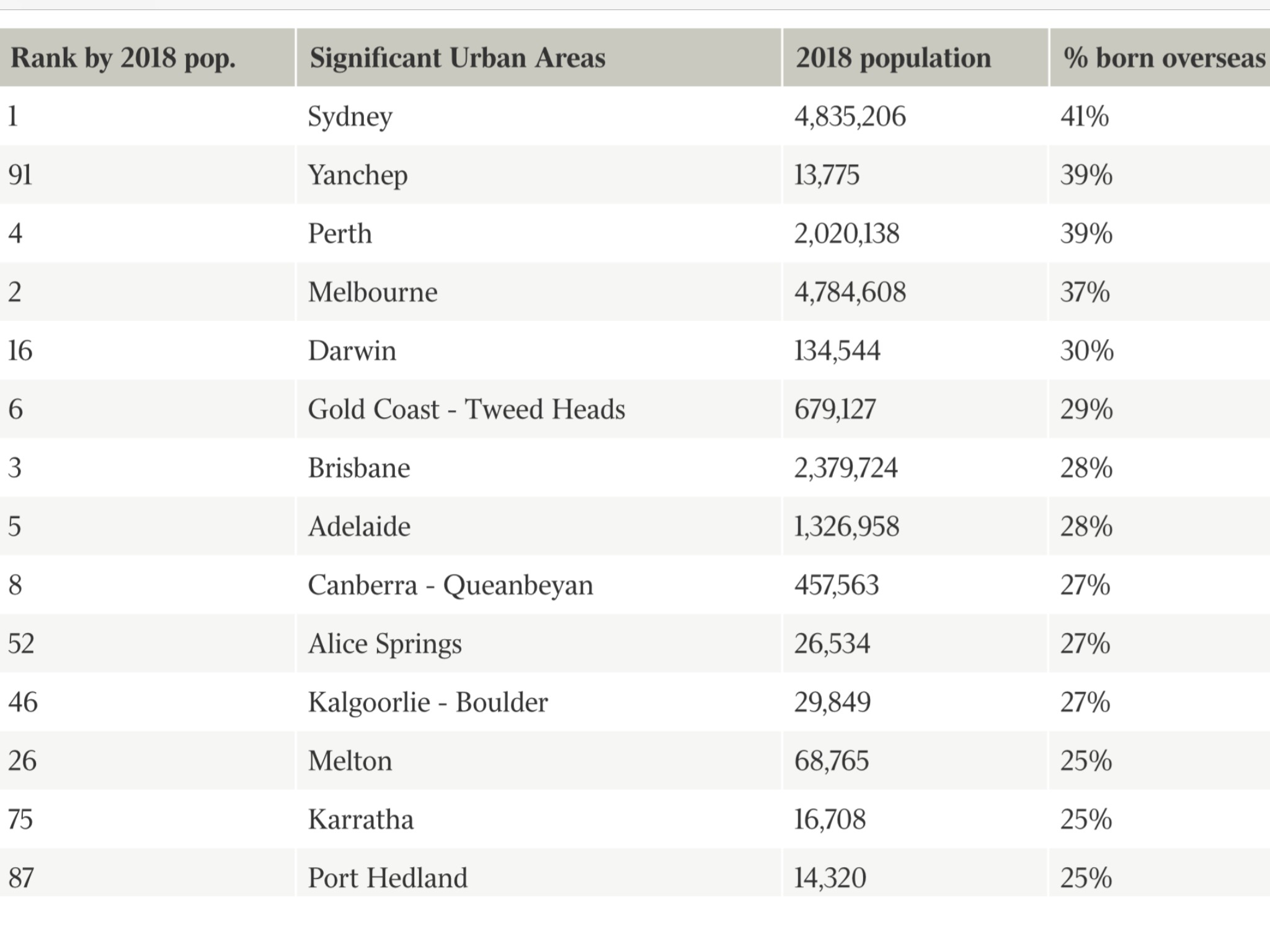 Some amazing figures at the top of this list. Sydney is 41% “born overseas”, Melbourne is at 37%. We have here the stats to confirm what you can see with your own eyes. Australia’s two biggest cities are occupied. Considering the fact that these figures do not include children of foreign born people, it is likely that Sydney and Melbourne have populations which are already more than 50% foreign. I’d love to see the data.

While a proportion of said foreigners are of European origin the trend here is obvious. Sydney and Melbourne are on track to follow London on our way to becoming minority white. As is Australia.

“Australian cities can be arranged by a range of demographic indicators including the proportion of local residents born overseas. The principle is logical enough. The bigger the city, the greater the proportion of overseas-born, leads to more demand for housing (and jobs), but also, possibly, a greater openness to global thinking, styling and priorities.”

“Sydney is not only this nation’s biggest city (for the time being), it is also our most cosmopolitan city where 41 per cent of residents were born overseas. This proportion for Greater New York is 29 per cent. For Paris it is 22 per cent. For Berlin it is 13 per cent.”

We’ll have to do something about that..

“At a national level, 28 per cent of the nation was born outside the continent. The equivalent proportion for the US is 15 per cent.”

Reinforcing Adam Piggott’s point that Australia is a lot further down the road to population replacement that Europe or America. And we don’t have guns. Also note the lie by statistic. No mention of the real level of foreigners living in Australia. Only “born outside the continent”.

“Perth, too, is an extraordinarily cosmopolitan city where 39 per cent of the population was born overseas. Although, to be fair, the Perth number is dominated by British migrants from the 50s and 60s who got off the boat from Southampton at the first opportunity, namely Fremantle.”

Interesting use of the word “cosmopolitan” here. Lumping whinging Poms into the same category as Apartment Australians. Everybody is the same. Race doesn’t matter. It’s all just diversity. Except you get the impression Salt wishes it was better diversity.

“Sydney is one the world’s greatest cosmopolitan cities.”

“And parts of Sydney — Cabramatta, Lakemba, Hurstville, Harris Park — are intense migrant enclaves and which over time will toss out, as if by some centrifugal forces, second-generation migrants to nearby aspirational suburbia. For example, Sydney’s Marrickville accommodated and then spun off Greek migrants just as Melbourne’s Carlton did for Italian migrants. It’s only a matter of time before Cabramatta is gentrified!”

As far as I know, Bernard Salt isn’t, well, you know, but his approach is entirely Talmudic. He saves his best word magic for the end:

“At the other end of the spectrum is cosmopolitan Australia’s long and predominantly Anglo (including some indigenous) cities and towns. In Broken Hill, just 5 per cent of the population was born overseas. In Parkes, Grafton and Kempsey it is 6 per cent. There would be smaller communities as well as the sparsely peopled farmlands fitting in behind Broken Hill with a lesser proportion of overseas born. That’s like the trail of ­vapour and dust behind a comet.”

It is almost like he has given us a rundown of all the places we can still white flight to. 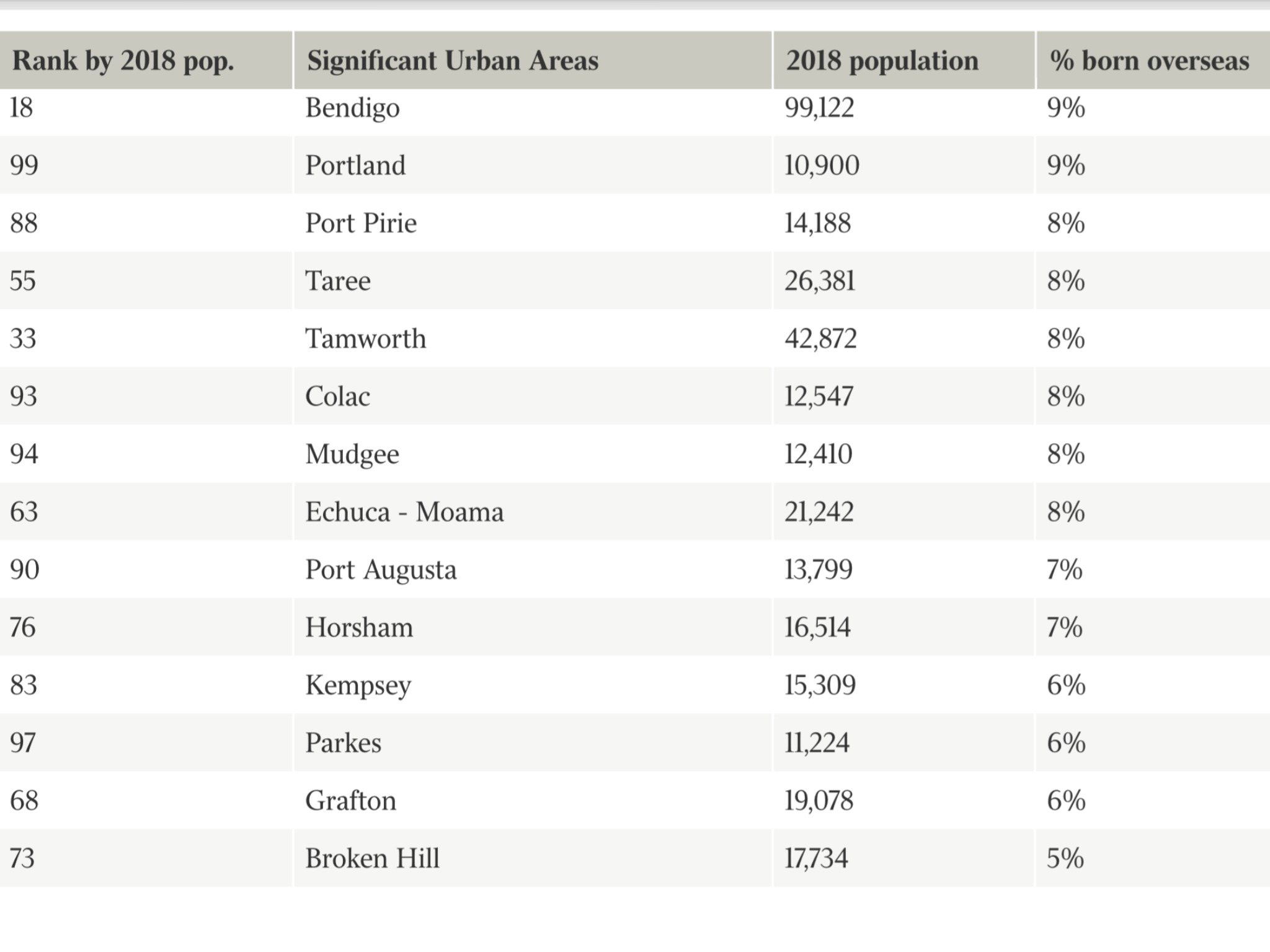 But hey, we Real Aussies who just want to have a good life with other real Aussies, we’re just “vapour and dust”. In the wind. If we were the kind of people who actually gave a stuff about what people say, we might even say that is a little derogatory. But we know better than to get caught up in that nonsense because as usual, they’re just trying to line us up:

“One of the key issues confronting Australia during the 2020s will be the skills shortage caused by the retirement of the baby boomers. This is why we now have an elevated level of immigration: we need knowledge workers. Attracting overseas students to regional universities drives the business of education, which very much benefits a regional city.

“However, if the volume of overseas students can be lifted, that increases the pool of skilled labour available to the regional workforce. And an emphasis on entrepreneurial skills increases the scope for local business formation. More skilled workers injected into local communities upskills the workforce, boosts new business formation, drives the local property market, and introduces cultural diversity to regional Australia. Plus, such a shift would alleviate development pressure on cities like Sydney and Melbourne.

“There’s too many big capital-city rocks taking the heat (and the labour market benefit) at the head of Australia’s cosmopolitan comet. We need to move inland cities from the vapour tail into the belly of this comet so as to widen regional Australia’s skills base, and to offer overseas students and workers an even better place to study, to work, to make a contribution to our beloved nation.”

This is complete nonsense. There is no expanation here as to why “cultural diversity” (ie demographic replacement) is a good thing.  I love traditional Aussie culture.  Don’t you, Bernard?  Why the bloody hell would you want to change it?  If regional towns are going to have a steady stream of new and often temporary foreign born migrants, not only are you going to change Australian culture forever, you are never going to get a new culture to settle in because it will always be changing due to the constant influx of new people.

Regarding the economy, if Australia needs a constant annual inflow of hundreds of thousands of migrants to maintain our economy, then our economy is by definition unsustainable. This is what happens when you regulate heavy industry out of the country and make electricity too expensive. You are left with an immigration and construction ponzi scheme in the place of a real economy. Eventually it will collapse.

Don’t patronise us by telling us we need more brain surgeons from Benghazi or entrepreneurs from Ethiopia. All Aussies in the bush need is access to cheap energy and plenty of water. This can be done easily by building new coal-fired and nuclear power stations, and by turning the coastal rivers inland. These real nation building projects have been held up for decades by watermelon greenies who hate white people and hate Australia. The ultimate proof that said greenies are traitors is that if they really cared about the environment they would oppose immigration to a country that has one of the biggest so-called “carbon footprints” in the world. They don’t, because they want to destroy Australia.

It is the ultimate irony in all of this. The Australian provides a good steady stream of anti-climate-nutter content so we can let off steam at those stupid hippies, but at the end of the day the globalist left is on the same side as the globalist right. Both are working towards the destruction of Australia via mass immigration.