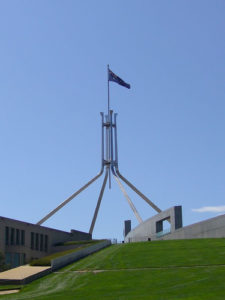 Just days after several interlopers were cleansed from the Australian parliament, it has been revealed that Senate President Stephen Parry may be a dual citizen of Australia and Great Britain. In a media statement, Parry has announced he will resign as a Senator if he is found to hold British citizenship:

“After the unanimous ruling handed down by the High Court of Australia on Friday last, there is now absolute clarity about the application of Section 44 of the Australian constitution.

“As a result of this, I have had cause to examine my citizenship status in relation to my late father having being born in the United Kingdom.

“My father moved to Australia as a boy in 1951. He married my mother in 1960 and I was born that same year in Burnie.

“I have always regarded my late father as Australian, particularly as he undertook his national service and participated as a member of the Australian Army Reserve and voted in every Australian election since adulthood.”

Update: It has been confirmed that Stephen Parry holds British citizenship, and he has resigned from parliament.

Backbenchers on both sides of parliament say they would back an audit of every member of parliament in order to determine their eligibility. (I am particularly looking forward to knowing the status of Wenny Pong.) This would be an excellent first step, although as Adam Piggott has pointed out, it would not go far enough:

“We need to have a referendum and change the consitution to reflect the ugly reality in our nation that almost 30% of the population at this moment were born overseas.

“No citizen shall be eligible to stand for parliament if he was not born in Australia to third generation Australian parents.

“That ought to fix a bunch of our problems right there.”

One irony of this is that it was not until 1984 that Australian citizens ceased to be British subjects, a deliberate act of treachery by the left. However, the racial purity clause of the Australian constitution must be respected, and it is there for a reason:

We don’t want our leaders to hold allegiance to any country, ideology, or institution other than the nation of Australia. If our leaders were to serve two masters, as it were, they might be inclined to open the gates of our country to our enemies…

On second thoughts, we’re all screwed.