The Melbourne media, academic and political elites have recently had a little bit of a problem crop up in relation to the ongoing vibrant diversification and enrichment of that once fine city.

The problem being that no matter how hard they try to cover it up, make excuses and even commission whole fictional television series to distract from it, the fact remains that young men of South Sudanese background are victimising the native population at a distressing rate. 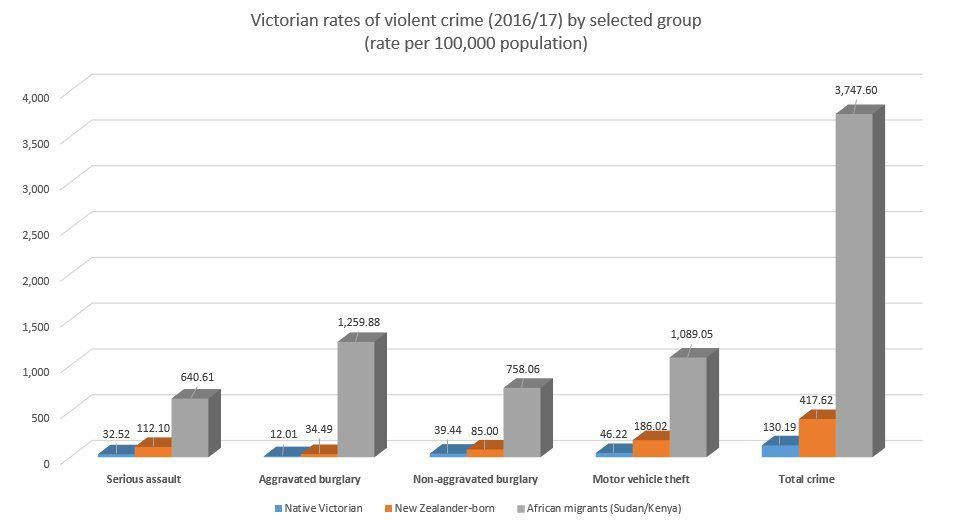 Naturally of course these are just teething problems in the journey towards the greater vision of a multicultural utopia without so many of those unfashionable white working class Bogans cluttering up the place. But sadly the mouth breathing denizens of the outer suburbs have been agitated by a nefarious conspiracy no doubt orchestrated by Rupert Murdoch (as he swirls his cognac in an oversize glass seated on a throne of skulls stroking a chained hyena) and by other disreputable gutter diving reporters who rudely insist on going around telling the dirty-handed proles things they don’t need to know.

Not proper journalism at all, clearly.

The last few weeks have been a frenzy amongst the better educated, better bred, better informed and all around better class of Melbourne citizens to prove to the easily swayed imbeciles who live beyond Northcote that there are no African gangs, that there is no problem with African crime and that the Police are working with African community leaders to help solve this problem of African crime that isn’t real so you shouldn’t worry about it.

Strangely enough some citizens have become sceptical of this official response. Personally, I can’t imagine why.

One such group held a meeting in the South eastern suburbs this past week. Surprisingly, considering the impeccable reputation for fairness and impartiality possessed by the Australian fourth estate, media access was strictly limited with only a brief interview being granted by two of the organisers to Channel 7.

Any frequent reader of XYZ (and is there any other kind?) will have read this publication’s excellent write up of what happened next. In short about half the prominent leftists in Australia both in print, on social media and online held a gigantic hissy fit.

Hey @7NewsMelbourne did you broadcast the expert local opinion of a guy who says Jews are parasites? Good job. Great newsing. Or…maybe…Get your shit together. https://t.co/mJPxieuqZp

For you see, one of the organisers of the meeting interviewed was none other than the larger than life Blair Cottrell. The foaming at the mouth and furious-finger-pointed denunciations were quite something to see. Leftists across the internet were enraged that Channel 7 had not disclosed Mr. Cottrell’s previous associations and had reported on him as if he were simply a community spokesman!

Imagine that. Journalists in Australia not doing research into the extremist links of the people they cover. Wonders indeed will never cease. If these same outraged Journalists would care to get in touch with XYZ next time they print the several hundredth article referring to violent extremist Ian Rintoul as a “Refugee advocate” I’m sure we’d be happy to help provide some background.

Or just as a general rule of thumb, next time there’s any political violence at all in Australia, how about doing a simple Google search of the person you’re quoting with “Socialist” next to their name to find out which group of violent totalitarian nutbags you’re helping to cover up for this week?

That’d be great, thanks.

While Mr. Cottrell is certainly guilty of saying silly things on Facebook four or five years ago and is open about the fact that in his youth he was incarcerated, the man has disavowed Neo-Nazism publicly, has worked extensively alongside the Sri Lankan born Danny Nalliah and was attending a meeting organised by True Blue Crew, a group that openly states that it accepts members from all ethnic backgrounds.

Meanwhile Jeff Sparrow, the increasingly bald founder of Socialist Alternative (the largest most violent and radical far-left extremist group in Australia today) teaches at Victoria University, is a host on 3RRR and has an opinion column for the Guardian Australia. Jeff has never renounced the totalitarian Marxist views of the organisation of violent thugs he helped create, and judging from his encouragement of the mob that attacked attendees and police outside the Milo event in Melbourne he holds them to this day.

The double standards are bleak.

Speaking of the Guardian, it was they who first issued a news report (rather than an opinion piece) denouncing Channel 7 for not exposing the horrific truth behind Blair Cottrell. In this piece by Melissa Davey there is only one source quoted attacking the coverage. That source was Tamar Hopkins. Ms Hopkins was referred to only as “The lead author of the Monitoring Racial Profiling report from the Australian National University”.

XYZ readers would know that this is the same Tamar Hopkins [on the left in above video] who not only has spent her entire professional career filing racism lawsuits against Victoria Police to make it almost impossible for them to properly enforce the law in African communities, but has a swag of extremist connections of her own.

In 2012 at Melbourne Trades Hall at a meeting of the previously mentioned Socialist Alternative group, Ms Hopkins gave a speech so extreme and anti-police that the Police Association was forced to cut all ties with the Trades Hall council.

In June 2013 Ms Hopkins gave another speech to Ian Rintoul’s Marxist extremist “Solidarity” group at Melbourne University. That’s the same Ian Rintoul who has boasted about being arrested over 60 times for his often violent and thuggish activism in the service of various radical extremist groups over the course of four decades. The same Ian Rintoul who has been mentioned hundreds of times by journalists of all persuasions without any of them ever mentioning anything about his extremism.

In 2015 Ms Hopkins gave a glowing eulogy at the wake of Ray Jackson, a man whom in his time was an activist for the Communist Party of Australia, the Association of Communist Unity and the Freedom Socialist Party. The FSP of course being the group founded and led by the ultra-extremist Debbie Brennan (otherwise known as Skeletor) who is not only the figurehead of the CARF group that started the riots outside the Melbourne Milo event but is so insanely out-there that she travelled as part of a Communist working group to Cuba in the 1980s and came away convinced that the island Stalinist regime simply wasn’t extreme enough.

But it’s left wing extremism, so that’s okay I guess.

The truth is that this current explosion has almost nothing to do with Blair Cottrell at all. The left in Victoria and in Australia as a whole has increasingly been in furious denial about African crime. I strongly suspect that in part this is because if there is a problem with our newly acquired African diaspora then the people who invited them here as well as the people who made it impossible to criticise them coming here are to blame.

Look over there! A Nazi! Isn’t he horrid!