When I was about 13 I read Reach for the Sky, a biography of Douglas Bader, the legless British pilot who led the “big wing” which savaged German bombers on September 15, 1940, demoralised the Luftwaffe pilots and helped save England from invasion. He had lost his legs after an accident in the early 1930’s but sheer force of will helped him survive, marry a beautiful girl despite his struggles, and to force his way back into the RAF when the war began. The movie was pretty good too.

It sparked my imagination as a boy, and as an adult I understand that although there are no more nazis to fight, and Hurricanes and Spitfires are horribly obsolete now, it modelled battling adversity and winning. This spark and modelling is necessary to transmit important messages to boys in their formative years about growing into a man. It also acted as a buffer against the onslaught of political correctness and Marxism forced on me as a young adult in the late 1990’s, and a beacon to help me find my way back from the intellectual and spiritual morass to which my university “education” had led me.

I consider Adam Piggott’s pushing Rubber Downhill to be another such story, and is excellent for boys and young men to read from the age of about 15 onward. He tells the story of how he left his home in Perth and travelled to and worked in a number of Australian cities, developed a rafting career which took him to Canada and Africa, and sets the scene for his next book in Europe. Perhaps a massive dogfight over London is cooler, but Adam tells a story for our modern times when adventure can seem a little harder to find. 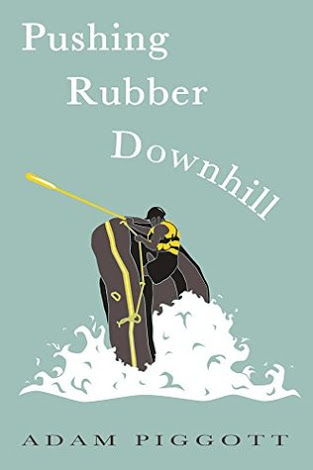 After a preamble in Perth, the story opens up with a motorcycle ride across the Nullarbor. Although he battled his mind, body and the elements to do it, it was still the protective embrace of his extended family and a bit of luck that got him across to Sydney. Once there, the reason for his being there (girlfriend) quickly fell apart, but he was determined to forge a new life there rather than return to the good life back home.

What will impress the reader early is that Adam looked to push himself, pre-red pill, from his earliest days. From using his spare time to explore the narrow laneways of Sydney and absorbing as many novels as he could, to talking his way into jobs for which he did not yet have the skills, Adam was prepared to take risks and work as hard as he could to make them pay off.

Such was the case when he got his first shot as a white water rafting guide, a job which would change the course of his life. What struck me was not only how hard he worked to achieve technical mastery of his profession, but that technical mastery on its own was not enough to attain success, nor even recognition by his peers. Crucially, he listened to the advice of his peers, from whom he learned that he needed to develop situational awareness and work as part of a team. To compare this to playing the piano, getting the notes correct is not enough; once mastered, your challenge is to communicate the music to an audience, and to have the calm and the presence of mind to do this under pressure.

As Adam reached a level of mastery and some recognition, a love interest took him to Canada, which had bigger, colder rivers and new opportunities to push himself. He is frank about his failures and close calls here. It was here that the contradictions in his life seem to have come to a head, and they manifested themselves in a very nasty illness. It was in Canada and shortly after his return home looking “like a concentration camp victim” that he really learned to back his own judgement, particularly with regard to women.

He had allowed himself to become involved in romantic relationships at a time when he was not fully developed as a man, and so his life’s direction was determined by those relationships. So his return to Cairns saw the culmination of his efforts to understand the traits and methods of the alpha males he was surrounded by, and his efforts to develop the confidence within himself that would attract the high SMV women to which his job gave him access. Although a series of attractive women rotated through his room, he doesn’t linger on it or boast about it. This is a reflection of Adam’s efforts through his site, www.pushingrubberdownhill.com to focus young men on becoming men; the benefits simply flow from this.

If the changes Adam made to his life based on his experiences in Canada proved to be a turning point, it was his time in Africa that shaped him. His moves to Sydney and Canada had been at the behest of women, and his move to Cairns had been more or less to get better access to women. His leap into Africa was based solely on jumping at an opportunity to challenge himself harder than he ever had before, by taking a job as a white water rafting guide on the the Nile in Uganda.

And he took a one way ticket to get there.

Here it is instructive to dwell on some of Adam’s article writing with regard to Africans, whether it is regarding their IQ or the the Sudanese crime wave currently being inflicted on Melbourne. In particular the following:

“The best thing that could be done with Africa would be to wall it off, Escape from New York style, and let them battle it out to the finish. And then whomever it is that emerges as the final victor we shoot in the head so that their inherent barbarian nature is never inflicted again upon the human race.”

Where does this view come from? I would put it this way:

In modern Western civilisation the limits are clear and fairly narrow, so that when we push those limits the consequences are not necessarily disastrous. This is great for maintaining an ordered and healthy society, but not much use to young males in developing their true potential. To do this we play sport, explore the wild, and find other avenues to push our body and mind to the limits. But we understand that there is a clear distinction between the sporting pitch and the home, between civilisation and the wild, and we apply the resources we learn from the former to uphold and defend the latter.

In Africa, there are limits, but they exist well and truly in the wild. Breach them, and you could end up dead. Bring Africans here, and we get Africa. When you read Adam’s adventures in Africa, you will understand why I thought his book could just as easily be named “Escape from Africa.” Adam saw that limit fast approaching, saw what it had done to a colleague, what it was doing to himself, and realised that he had to leave.

To get out he had to take an enormous risk. To reference his site again, he wrote an article recently about how he learned a great deal from the Seinfeld episode where George realised that every decision he had made up until that point had been wrong, so he decided to do the opposite of what he usually did and his life suddenly became better. The risk Adam took reminded me of another Seinfeld episode, where George realised that if he was to ever leave the job he hated for one he liked, he would have to quit, in order to have “the fear” to drive him to get it.

The risk Adam took paid off, most importantly because he did it on his own terms. Therefore, my earlier suggestion that his book could be called “Escape from Africa” misses the point: Africa made Adam.

I have skipped very lightly over the detail of the book in order to focus on the personal development Adam Piggott went through in order to become who he is. The fun and excitement is in the detail of the book. It is a cool book. It is easy to read, and deliberately so. Unlike stories written by women, cool things happen; like an African version of horse racing, or pulling hot chicks with no memory of how they got in one’s bed; and Adam tells funny stories and got to do awesome things, like hosting impromptu mega parties, negotiating smuggling deals with the nicest psychopath you will ever meet, and walking at the head of an angry, dancing mob, at the behest of a witch doctor.

Thus it is a book that will appeal to men of all ages. Men of my generation and older will associate with the times Adam describes, and be able to compare their own lives to where he was at the same time. But most importantly it provides an example to young men just emerging from the feminised education system that has enslaved them for the previous decade. For many young men it is tempting to become bitter and inert as one swallows the first red pills and discovers the superstructure of lies framed by our increasingly socialist societies. Pushing Rubber Downhill provides a positive way out of the mental minefield young men face, and is a good yarn to boot.

Now that this review is done, I have a former student to whom I will recommend the book as soon as I can.

You can purchase Pushing Rubber Downhill by clicking the following link, which also appears on the sidebar. The link will take you to the Australian Amazon site which will let one order to Australia.

Pushing Rubber Downhill: A journey to manhood via whitewater adventures 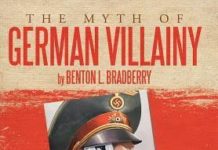 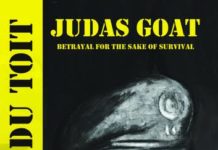 Of Goats and Scapegoats 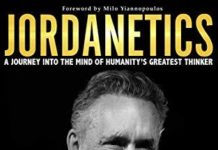 Book review: Jordanetics: A Journey Into the Mind of Humanity’s Greatest Thinker