We here at The XYZ have been pushing the #NukeMelbourne hashtag for quite some time. There have been times when I would have been quite happy for someone to incinerate my city if I knew it could save the rest of the country. I even devoted an article to it, and when I reviewed the Stefan Molyneux and Lauren Southern event in Melbourne, I couldn’t resist using it. I could not be happier to say that it appears Lauren Southern reads our work:

“So far my trip in Australia has been absolutely lovely, wonderful country, wonderful people … And then there’s Melbourne.

“You know that old tale in the bible when Abraham is talking to god about Sodom and Gomorrah … He’s like begging with god and says ‘god, if I can find ten good people in Sodom and Gomorrah, please, do not nuke Melbourne.”

That’s my joke, and she’s welcome to it. I hope she also uses the one about people being turned into pillars of salt as they turn back to look at Melbourne when they’re on their way to Ballarat..

However, the success of both the Milo event in Flemington and Stefan Molyneux’s and Lauren Southern’s event in Thomastown have convinced me there may be hope for the old dog yet. Conservatives outnumbered the left 10 to 1 at both events, even with the manipulated ring-ins from the Flemington flats. Furthermore, despite Melbourne being an epicentre for Australian poz, it has also become a focal point for the resistence against it. The XYZ was founded here, the Unshackled has moved here and the future God Emperor of Australia has lived here all his life.

How well we fight will determine whether we end up like the rats of Tobruk of the Catholics of Barcelona.

Lauren Southern happens to agree with me:

“We did find a few hundred good ones there — there is a silent majority I believe in Melbourne so we can’t nuke it yet guys I’m sorry.”

It didn’t stop her getting into trouble, however: 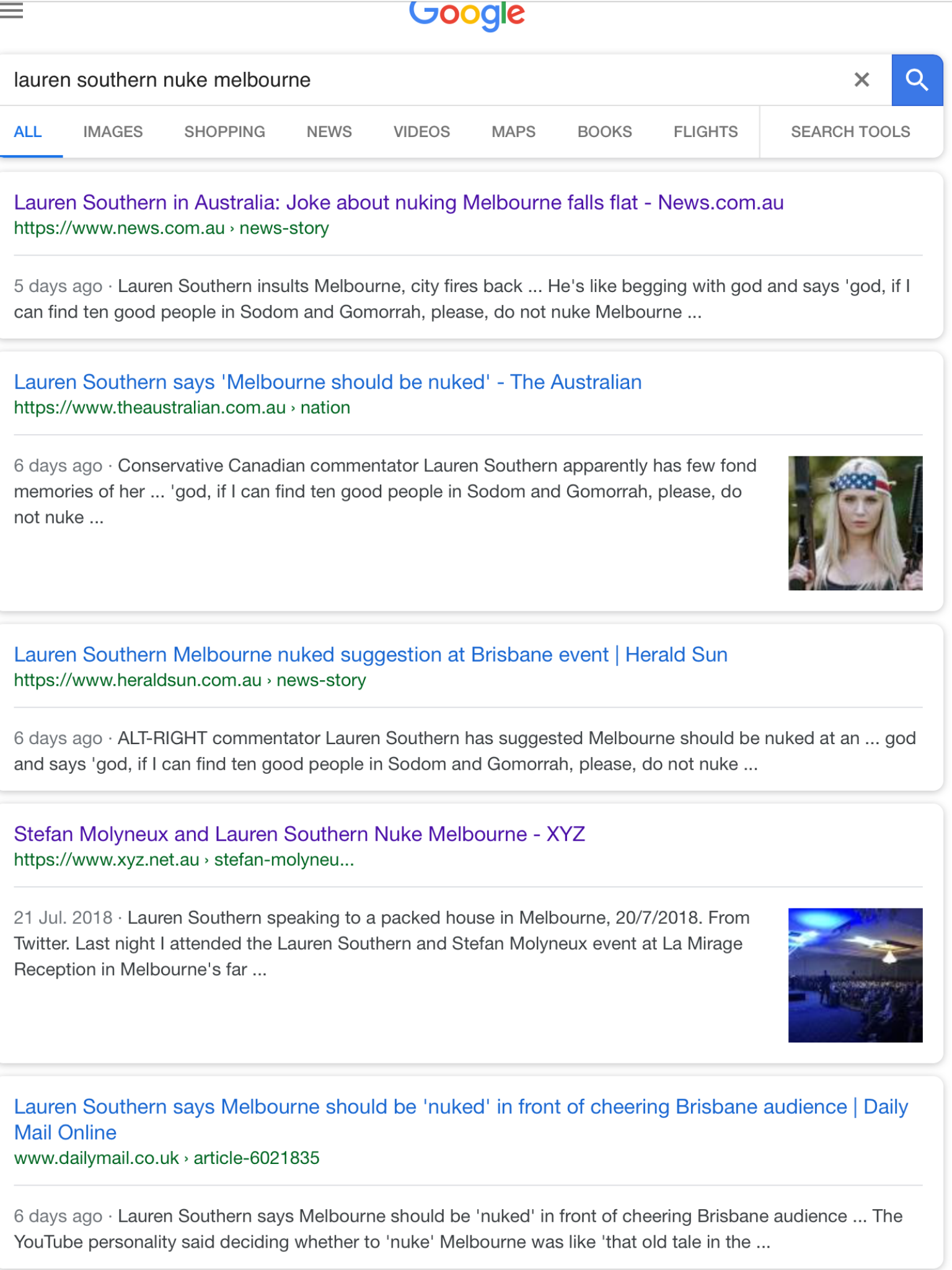 When Milo visited Australia, he made this very salient point:

“My experience demonstrates two facts which are becoming obvious to Australians frustrated with their politically-correct media. Firstly, that Australia’s press is irretrievably left-wing, infested with bien pensant feminists and hand-wringers. In other words, your media establishment doesn’t serve at least half the population, because it is biased.”

The Australian media has added plenty of evidence to the case against it during the Molyneux-Southern tour.

When Lauren made a little video outside Melbourne Central Station where she asked students if we should ‘kill Lauren Southern’, some media claimed it was a publicity stunt which had backfired when ‘nobody knew who she was’, even though many of the subjects were clearly playing along.

And when she proved the existence of Sharia Law in Lakemba, the media claimed that nothing actually happened.

Funnily enough, quite a lot of people disagree with the two of us:

Lucky I no longer believe in democracy.

Melbourne can stay, but we’re gonna have to fight for it.