Mobile phone manufacturer and sponsor of the Rio Olympics, Samsung, has been embroiled in scandal today as a result of its “One world, one anthem” advertisement, which features the closing slogan “proud sponsor of a world without barriers.”

In response to seeing people from one country singing the national anthem of another, and the celebration of the free movement of people across borders, people of European descent living in Europe, North America, Australia, New Zealand and South Africa say they no longer feel guilty for their forebears’ settling across diverse parts of the world. In fact, many from the People of Europe say that the advertisement makes them feel proud. As one South African living in Hong Kong has stated on social media:

“Watching this advertisement, I finally felt proud of who I was, and what those before me have brought to the world. I have always been taught that my ancestors were evil for daring to look for a better life in a foreign land, but here is an advertisement which celebrates the mixing of people from all over the world. My ancestors have been enriching every continent on the planet for centuries. I now see them for what they truly were: pioneers.”

Naturally, public relations officials at Samsung reacted quickly to such overt displays of racism. In a media statement, a spokesperson for Samsung stated:

However, within an hour, this new policy position backfired spectacularly, as the People of Europe asserted with glee their “land rights” and demanded compensation for what they view as an “historical legacy of invasion and occupation from the peoples of North Africa and the Middle East.” As a Spaniard living in Italy opined on Facebook:

“It took my people 700 years to expel the foreign invaders. Now that my country has become slightly more successful than their country, they are coming again, and demanding the right to live on our land. Never forget whose land you are living on!”

One academic from Eastern Europe has even claimed:

“Half a century of political and educational policies designed to systematically erode Europeans’ sense of who they are have led to a crisis of confidence, motivation and demography amongst the People of Europe.”

Samsung have issued a clarification which appears to have finally settled the matter, and returned the social media postings of the People of Europe to their natural docile state:

“Samsung reinstates that its “One world, one anthem” advertisement, and its slogan “proudly sponsoring a world without barriers,” relates first and foremost to the way in which technology invented by white people can improve the lives of diverse people, and lead to increasing tolerance, diversity and enrichment around the world by helping people communicate across bigoted national boundaries. Samsung also reinstates that it stands united in its efforts, along with progressives of every stripe, in every corner of the world, to exterminate the white race.” 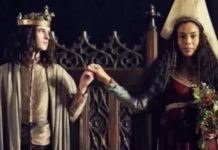