Once one understands that the Trump Train is very deliberately placed on rollercoaster tracks it is much easier to enjoy the Journey.

Like the Mongol Generals of old who annihilated all in their path, Donald Trump regularly feigns retreat in order to lure his opponents out of position, and onto more favourable ground so he can crush them utterly.

So it was with the the government shutdown in January of this year, triggered by a dispute between the President and the House of Representatives over funding for a border wall with Mexico. Despite calls by many of us to prolong the shutdown in order to starve out the parasite class, the God Emperor reopened the government on January 25 and stated that he would allow three weeks for further negotiations.

These three weeks were used to outflank Democrats and demonstrate that they were not negotiating in good faith. He now has them surrounded.

Donald Trump will declare a national emergency on border security to secure funding for his border wall in a dramatic move which could trigger a major legal challenge over presidential powers.

The White House confirmed the president intended to sign a funding bill on border security to avert a government shutdown and that he would also declare a national emergency to fund his border wall.

“President Trump will sign the government funding bill, and as he has stated before, he will also take other executive action — including a national emergency — to ensure we stop the national security and humanitarian crisis,” said press secretary Sarah Sanders.

“The President is once again delivering on his promise to build the wall, protect the border, and secure our great country.”

The move will allow the president to access funds from departments such as Defence to pay for is wall without needing Congressional approval.

It follows a rancorous few months of negotiations with Democrats over funding for the wall which ended in Democrats approving only $US1.375 billion for new border barriers compared with Mr Trump’s demand for $US5.7 billion.

Keep in mind that during President Trump’s State of the Union Address, he claimed that he wanted to bring even more people to the US:

NEW: In his State of the Union, @realDonaldTrump ad-libbed a line proposing to expand legal immigration to record highs.

If this turns out to be a genuine statement of intent, in effect mirroring the Australian Liberal Party’s posturing as strong on border protection as cover to ramp up mass immigration, then Trump should indeed have his feet held to the fire. However, a strong case can be made that this is in keeping with his pattern of behaviour and was simply another feint. Basically, everything depends on which way Trump will go on “legal” immigration.

Check out this tidbit from the BBC:

“Declaring a national emergency would be a lawless act, a gross abuse of the power of the presidency and a desperate attempt to distract from the fact that President Trump broke his core promise to have Mexico pay for his wall,” they said.

“He couldn’t convince Mexico, the American people or their elected representatives to pay for his ineffective and expensive wall, so now he’s trying an end-run around Congress in a desperate attempt to put taxpayers on the hook for it.”

Of all the responses from Democrat traitors, I never expected them to be quite that petty. Relentlessly criticise the President’s aim to make Mexico pay for the wall, then turn around and say he has broken his promise. Also note the way they are taking the name of “the American people” in vain.

Back to the Oz, we should expect legal challenges to the national emergency, given the predicable response from Democrats:

Democrats believe Mr Trump’s actions are an abuse of his executive powers with Senate minority leader Chuck Schumer describing it as a “lawless act’’.

Democrat House speaker Nancy Pelosi said the move would create a precedent for other presidents, including Democrat presidents, to use against their opponents.

She said Republicans should “have some dismay about the door that they’re opening, the threshold that they’re crossing,”

“The precedent that the president is setting should be met with great unease and dismay among Republicans.”

On the first anniversary of the Parkland school shooting, she asked how Republicans would feel if a Democrat president invoked a national emergency on gun violence to secure tougher gun laws.

That’s a promise, not a threat.

Donald Trump will likely recognise that he has crossed the Rubicon, move to dissolve both Houses of Congress and do away with the virus called democracy which we caught (among other things) from the Greeks a couple of millennia ago.

Bring on the Imperium. 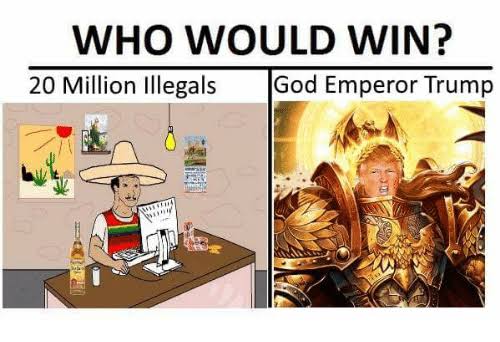