When playing chess, capturing a helpless pawn can sometimes waste a move and hand the initiative over to one’s opponent. At other times, knocking out a couple of pawns can be crucial to opening up an opponent’s defence:

“A three-nation search-and-rescue mission was under way late yesterday for 10 US sailors missing after a guided-missile destroyer collided with an oil tanker east of Singapore, the second collision ­involving an American warship in as many months.

“The US Navy’s 7th Fleet command said five sailors were also ­injured when the USS John S McCain collided with Liberian-flagged oil tanker Alnic MC at 5.24am (7.24am AEST) yesterday as it headed to Singapore for a port visit.

“The accident occurred near the Malacca Strait, one of the world’s busiest and most congested shipping lanes but also one of the most well-policed, and has raised questions about how two catastrophic collisions could happen so close together.”

Fatal accidents are tragic, but they happen. Two is of deep concern.

But wait, there have been four. From the Fake News Network:

“Defense Secretary James Mattis said Monday he supports a decision by the Chief of Naval Operations Adm. John Richardson to conduct a “broader inquiry” into the recent accidents and “to determine any causal factors.” Mattis spoke to reporters while traveling in Jordan.

“In the wake of Monday’s collision, Richardson is expected to order a rare operational pause across the entire Navy, a US defense official told CNN. The pause is a one-day, safety stand-down that would be done over the course of a couple of weeks and at the discretion of individual commands, the source said.”

China has been increasingly aggressive since, well, the 90’s. They are building islands – read, unsinkable battleships – in disputed regions of the South China Sea and claiming the waters around them. In response, the US navy has been conducting “freedom of transit” operations – read, floating heavily armed warships through said waters.

Another possibility, again from The Australian: 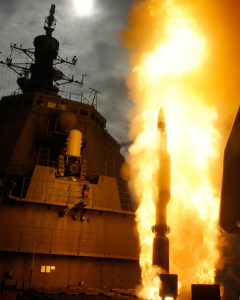 “The latest collision comes at a critical time for the US Navy in the Asia Pacific region, with China flexing its muscles through the South China Sea and fears North Korea is closing in on nuclear strike capability.

“The US Navy’s Aegis missile defence system is seen as a possible counter to any North Korean missile launch. But the McCain could be the third of 11 Aegis-equipped warships based at Yokosuka Naval Base in Japan to be unavailable for deployment this year.”

Way to reduce the effectiveness of the US’s Yokusaka-based missile defence shield by over a third. How unfortunate that tankers keep ramming Aegis ships. Couldn’t ram a transport. Or maybe it is just a series of unfortunate events.

In other news, from news.com:

“US PRESIDENT Donald Trump has given a prime-time address to the nation to detail his view of the US role in Afghanistan, an issue that has vexed his two predecessors.

“In his address, Trump said a rapid Afghanistan exit would leave a “vacuum” for terrorists.

“He said his new strategy on Afghanistan will be based on conditions on the ground, not timing.

“It’s a complete change of heart from his beliefs he held during the race to the White House, where he vowed to withdraw troops from the war torn nation.”

This is a fair call. Barack Obama created the vacuum in Iraq and Syria which led to the rise of ISIS by failing to negotiate a status of forces agreement with the new Iraqi government back in 2011. And this was in a zone which saw no US combat fatalities in its final months of operation. Iraq had been, more or less, pacified.

There could be another factor at play here, however. From Business Insider:

“Chinese and Indian troops are readying themselves for a possible armed conflict in the event they fail in their efforts to achieve a peaceful resolution to their border dispute on the Doklam plateau in the Himalayas, observers said.

“On Friday, India’s defence minister Arun Jaitley told parliament that the country’s armed forces are “prepared to take on any eventuality” of the stand-off, Indian Express reported the same day.

“Sources close to the Chinese military, meanwhile, said that the People’s Liberation Army is increasingly aware of the possibility of war, but will aim to limit any conflict to the level of skirmishes, such as those contested by India and Pakistan in Kashmir.”

How interesting. Again from news.com:

“He did not provide a number of additional troops that will be sent to the war, though US officials said ahead of the speech they expect him to go along with a Pentagon recommendation for nearly 4000 new troops.”

One might suggest Donald Trump is keeping a knight in Afghanistan to watch over both India and China.  Nothing to do with Islam, just this once.