We are hitting levels of delusion that shouldn’t even be possible, so much in fact that I would like to term this current epoch the “The Age of Delusion”. Every age has it’s defining characters, titans that stand astride the pages of history, and I would like to nominate Amy Schumer as the herald of this epoch.

I actually don’t think she is responsible for the “Age of Delusion” she is merely the best so far at riding the wave. Amy’s first leading role movie was “Trainwreck”, where she played a promiscuous, alcoholic, commitment-phobic journalist who is courted by a successful doctor. Sounds like the modern female fantasy writ large; do whatever you want and then get rescued in your early thirties by a high status male who worships you for no reason.

Amy would later release a comedy special on Netflix, mostly shock humor, including such classics as:

“On its best day, my pussy smells like a small barnyard animal. Not like a big, f—ed up llama chewing and spitting. A little, like… a goat. That’s on its best day. On its worst day, after a blackout, ISIS. It’s f—ed up, guys. It’s bad.”

The special was so panned by customer ratings on Netflix, that Netflix removed the rating system.

“The alt right organized trolls attack everything I do. Read the @splitsider article,” the Trainwreck star wrote on Instagram. “They organize to get my ratings down. Meeting in sub Reddit rooms. They tried on my book and movies and tv show. And I want to thank them.”

Amy’s latest work is a movie called “I feel pretty”:

“Renee Barrett, an ordinary woman who struggles with feelings of insecurity and inadequacy on a daily basis, wakes up from a fall believing she is the most beautiful and capable woman in the world. With this newfound confidence she is empowered to live her life fearlessly and flawlessly.”

Firstly, a lot of discourse on this topic labors a lot under the under the premise that women feel pressure from males to look like models and feel like they have failed when this can’t be the case (because models are relatively more attractive than the norm, not everyone can be an outlier to the upside).

However, counter intuitively it is actually males who are under the most unrealistic expectation from the opposite sex, as the OkCupid survey reveals:

“Our chart shows how men have rated women, on a scale from 0 to 5. The curve is symmetric and surprisingly charitable: a woman is as likely to be considered extremely ugly as extremely beautiful, and the majority of women have been rated about “medium.” The chart looks normalized, even though it’s just the unfiltered opinions of our male users.

“Given the popular wisdom that Hollywood, the Internet, and Photoshop have created unrealistic expectations of how a woman should look, I found the fairness and, well, realism, of this gray arc kind of heartening.”

But when the situation is reversed:

“As you can see from the gray line, women rate an incredible 80% of guys as worse-looking than medium. Very harsh. On the other hand, when it comes to actual messaging, women shift their expectations only just slightly ahead of the curve, which is a healthier pattern than guys’ pursuing the all-but-unattainable. But with the basic ratings so out-of-whack, the two curves together suggest some strange possibilities for the female thought process, the most salient of which is that the average-looking woman has convinced herself that the vast majority of males aren’t good enough for her, but she then goes right out and messages them anyway.”

So now that we have established that this pressure women feel doesn’t really originate from males, but rather comes from the modern snowflake female’s desire to receive validation for being particularly outlier-ly beautiful, we can move on to what this film is really about, which is “victimhood”: i.e. I am not pretty, this is a disadvantage, life is not fair, the Patriarchy did this, we need to engineer better societal outcomes etc.

This is unfortunate for Amy, because victim Olympics is a not a game that she can win. Over to you, Sofia Hagen:

“Amy Schumer is blonde, white, able-bodied, femme and yes, thin. She IS society’s beauty ideal. So they give her a ponytail and remove her make-up and suddenly she’s ugly? Why not just give her glasses or a fatsuit? What is wrong with this world?

“Who is this meant to resonate with? Before we can enjoy the premis(e), surely we have to buy into the fact that she is not pretty. How many of us are bigger than her? Are we supposed to accept that THIS is ugly when it’s all we’ve been taught that we should aim for?

“I have watched the trailer so many times now. Would it be funny if it was someone GENUINELY (conventionally) unattractive? Someone (who) did not live up to a single beauty ideal? Or would it then be provocative to see someone undeserving of confidence actually feel confident?

“Amy Schumer feels like Hollywood’s excuse. Like, LOOK, we put a FAT UGLY woman on TV because she has a teeny-tiny belly and also in this scene she doesn’t wear make-up, so now we’ve fixed it. We’re not longer shallow. Fuck the fuck off.

“I understand that there are people who look exactly like Amy Schumer who do feel ugly or unattractive. But that doesn’t change the fact that those people will still be treated better by society than someone actually fat, actually not white, actually not femme-passing.

“Also how about instead of her ‘hitting her head and damaging her brain’ in order to become so deluded that she’d think she was ACTUALLY pretty, she read about capitalism and realised that women’s low self-esteem is a patriarchal ploy and that she is worthy of self-love?

“I MEAN, SHE HITS HER HEAD AND THEN FEELS BEAUTIFUL. This movie legit had to become SCI-FI for it to be realistic. Only in a MAGICAL universe could she possibly feel pretty. HER – blonde, white, thin, femme, cis, blah, she is ALL THE THINGS AND STILL SHE IS NOT CONSIDERED PRETTY.

“I’m done, I’m out. Come back to me when you’re ready to fight against the oppression of women instead of contributing to it. I DO NOT WANT TO LIVE IN A WORLD WHERE AMY SCHUMER IS CONSIDERED UGLY. Go fuck yourself, Hollywood.

“I’M BACK BECAUSE I JUST REMEMBERED A SCENE IN THE TRAILER WHERE SHE IS TOLD THAT A STORE DOESN’T CARRY HER SIZE. Hold me back because I’m about to flip tables on this piece of shit movie now. SHE LITERALLY CALLED OUT A MAGAZINE FOR CALLING HER PLUS-SIZE.

“SHE SAID IN AN INTERVIEW THAT SHE WAS A SIZE 8. WHICH SHOP DOES NOT SELL CLOTHES IN A SIZE 8? How dares she claim that experience as her own when she is a SIZE 8? Like maybe just go next door or into 100s of other shops that has your size. What the fuck?

“P.S. I know she is being held to a higher standard because she’s a woman and that’s unfortunate. I know there’s hundreds of movies that would never cast her because she’s still not thin or attractive enough. It’s still bullshit though and I’m still mad.

“This film is a classic “Let me remove her glasses and VIOLA, underneath she’s actually NOT a monster”. When will Hollywood realise that all women, at some point, will just not be wearing make-up or pulling a warm smile? We are all, always, ugly and beautiful.”

I quoted this to show that even the most outrageous symptom of our delusional times (Amy Schumer), is accused of being too conventional, too mainstream, too serving of the patriarchy, too serving of the capitalist agenda and too in compliance with traditional beauty standards.

The cultural influencers in our society have lost it completely. Some are weaponized for political purposes but most are just useful idiots deconstructing society to get back at Dad (patriarchy, order, capitalism personified).

This level of delusion and neurotic insecurity in a mass society with universal voting rights is unprecedented, it’s whats leading to the evergrowing nanny-police state, and its increasingly more political social engineering attempts.

Our society, and it’s fabric of agreed facts and shared value systems, is being shredded. We are losing cabin pressure and my advice for you is to brace for impact. 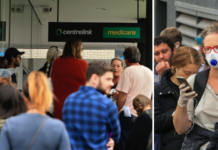