There is quite a bit going on over in China, and it has made us sit up and pay attention here in Australia. As a trade war escalates between America and China, Hugh White states that Australia should pick a side and consider going nuclear, and David Hilton points out that Australia is woefully unprepared for conflict with China. Some flights to Hong Kong have been cancelled and China is sending APC’s to Hong Kong.

Chinese tanks have rolled into place along the Hong Kong border, as the government threatens to show no mercy to pro-democracy protesters. @renaehenry9 #9News pic.twitter.com/9mOSdQRXZ4

Amidst all of this, Liberal MP Andrew Hastie has prompted headlines blaring that he he compared the rise of China to the rise of national socialist Germany, for which he has been criticised by both Labor and China, rebuked by Simon Birmingham and PM Cuck Morrison has publicly distanced himself from Hastie’s comments.

Within minutes of hearing the first headline on the radio my mind had constructed my response article and its main points:

Then I read what Hastie actually wrote.

All my points are valid, but I should have figured out that the mainstream media were lying. Here is the apparently offensive passage:

“The West once believed that economic liberalisation would naturally lead to democratisation in China. This was our Maginot Line. It would keep us safe, just as the French believed their series of steel and concrete forts would guard them against the German advance in 1940. But their thinking failed catastrophically. The French had failed to appreciate the evolution of mobile warfare. Like the French, Australia has failed to see how mobile our authoritarian neighbour has become.”

Hastie has pointed out the folly of using outdated thinking when competing against a strategic rival. The French tried to fight World War II the way they fought World War I and they have never been able to shake the moniker of “cheese eating surrender monkeys” since. His focus here is strategy. To the extent that he has compared one authoritarian regime to another, refer to my points 1, 2 and 3.

This misrepresentation of Hastie’s words is compounded by the fact that he actually did insist that we compare communists with communists:

“Even worse, we ignore the role that ideology plays in China’s actions across the Indo-Pacific region. We keep using our own categories to understand its actions, such as its motivations for building ports and roads, rather than those used by the Chinese Communist Party.

“The West has made this mistake before. Commentators once believed Stalin’s decisions were the rational actions of a realist great power. But the Princeton Professor of History, Stephen Kotkin, found otherwise, after years of sifting through the archives of top Soviet meetings. He discovered that Stalin and his advisers “said the same things as they said in their propaganda … [using] all the Marxian categories, because it turns out the Communists were Communists! They believed in the ideas and it’s only by taking the ideas and politics seriously, can you understand the phenomenon.

“We must be intellectually honest and take the Chinese leadership at its word. We are dealing with a fundamentally different vision for the world. Xi Jinping has made his vision of the future abundantly clear since becoming President in 2013. His speeches show that the tough choices ahead will be shaped, at least on the PRC side, by ideology – communist ideology, or in his words, by “Marxist-Leninism and Mao Zedong Thought”.

Consider this lying headline from SBS: 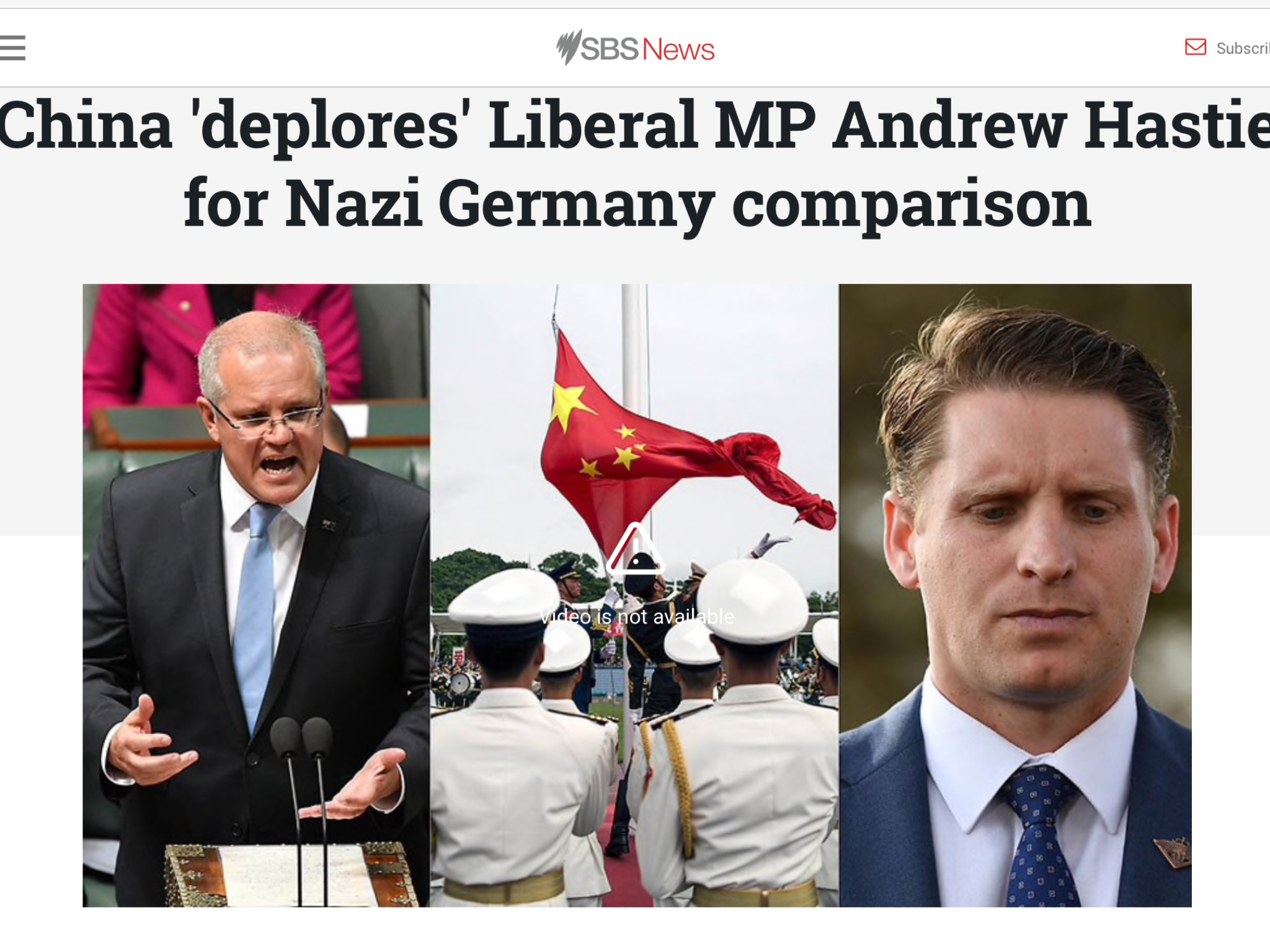 Then consider the Chinese Embassy’s statement in response to Hastie:

“We strongly deplore the Australian federal MP Andrew Hastie’s rhetoric on “China threat” which lays bare his Cold-War mentality and ideological bias. It goes against the world trend of peace, cooperation and development. It is detrimental to China-Australian relations.

“History has proven and will continue to prove that China’s peaceful development is an opportunity, not a threat to the world.

“We urge certain Australian politicians to take off their “colored lens” and view China’s development path in an objective and rational way. They should make efforts to promote mutual trust between China and Australia, instead of doing the opposite.”

No mention whatsoever of so-called “nazis”, and they said “Cold War mentality”, not “World War II metality”. SBS lies on our dollars.

Rory Medcalf at the Australian Financial Review has made a similar case, so it is not just ‘far right internet trolls‘ with whom Hastie shares common ground. However Medcalf displays the common historical blindspot of our age:

“Yes, the article equated this with the failure to understand the extent and significance of Chinese Communist Party operations today. But it avoided any parallels with the evil of National Socialism. The word Nazi did not appear once….”

Well thank goodness for that.

“The People’s Republic of China, especially through its reform era from 1978 to 2013, has been a place of historic achievement. The regime loosened the shackles it had earlier imposed on the Chinese people, enabling them to raise their living standards, along with some improvement in governance and freedoms.

“In external relations, China is not the Third Reich. Since its 20th-century wars against India, Vietnam and US-led UN forces in Korea, China has often shown strategic restraint, even as its capabilities and ambitions have grown. Its army has barely fired a shot in anger since 1989, when it was ordered to kill Chinese citizens in the heart of Beijing.”

As far as the Australian Defence, Intelligence and Diplomatic establishment is concerned, Rory Medcalf is about as senior as it comes. You can read a bio here.

However, he is an utter drooling retard.

Can you imagine that if the National Socialist German Workers’ Party had remained in power at the end of World War II that a head of the National Security College would have ever made the following analysis:

“The Third Reich, especially through its reform era from 1978 to 2013, has been a place of historic achievement. The regime loosened the shackles it had earlier imposed on the German people, enabling them to raise their living standards, along with some improvement in governance and freedoms.”

It is here that we arrive at the real problem once again. Whenever somebody so much as hints at so-called “nazis” everybody in European countries goes crazy. We have been conditioned to do so by 70 years propaganda by a globalist academic and media establishment which has focused almost entirely on the national socialists of Germany from 1933-1945, while minimising, ignoring and outright denying the holocausts committed by communists for over a century.

This artificial obsession has been weaponised to undermine our formerly homogenous European countries. It is essentially why we have allowed so many Chinese to land in Australia, because Australians can’t have a say on immigration because holocaust. Andrew Hastie provided what should be considered middle of the road analysis seeking to draw strategic lessons from the errors of World War II. Instead our conditioning has sabotaged our ability to think clearly about how to respond to the rise of Communist China.

Like the French in 1940 we are stuck, immobilised on the Maginot Line in our own mind. 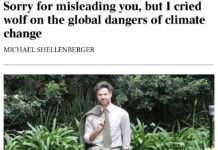