While I’ve refrained from comment on the issue of Cory Bernardi’s vanity project so far, after watching his pathetic performance on The Bolt Report Monday night, it’s time to speak up.

You’re a disappointment to me and everyone who ever hoped you were about something other than yourself.

The Trump insurgency was in full flamboyant bloom on every television on almost every night across the English-speaking world.

Brexit had changed the way we looked at polling and politics, as working-class Labour voters in the north joined with middle-class Conservatives in the south in a patriotic alliance which shook the certainties of the London-based political classes.

The world was changing, politics was changing, the earth was moving beneath the feet of those in power and Bernardi’s initiative seemed to suggest the possibility of a genuine cross-party grassroots activist group on the right to rival the Union- and Soros-funded GetUp! on the left.

Here at XYZ Jeremy Morgan wrote of his excitement at this new project, and I myself wrote in agreement.

Our commenters here at XYZ and readers on social media concurred; most seemed enthusiastic at the idea of fighting the left at their own game, taking the political struggle in a new and exciting direction as the enemy does on so many fronts at so many times.

Fifty thousand Australians felt similarly eager and signed up immediately. Many of my friends were among them; the idea that we weren’t simply going to lie supine in the gutter of the Culture War while the left kicked and screamed abuse at our prone bodies filled many of our hearts with hope.

But then nothing happened.

Some people I know tried to get in touch with the new organisation offering to help set up meetings or even organise local campaigns. The replies were uninspiring appeals for patience, stating that maybe in six months, or a year, something might happen, and by the way could you send money?

Slowly I saw the enthusiasm around me dry up. The chance to build something real withered away and died.

In the meantime the earth kept shaking: Trump caused an earthquake that made Brexit seem like a tremor, with every thunderous footstep he cracked the once solid foundations beneath the formerly great institutions now dedicated to the death of the West.

The leftists wailed in the street, tearing at their clothes and striking out violently in rage at anyone or anything that reminded them of their impotence.

And still Cory did nothing.

In the meantime, Pauline Hanson built on the shock success of One Nation by visiting seemingly every town and city in regional and rural Queensland.

Over the summer while other politicians and the big name journalists were on holiday, the fiery redhead captured the news cycle week after week.

By the time the summer break was done, her efforts had borne fruit. 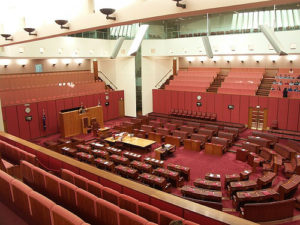 One Nation was now polling higher than the Greens, and two former Premiers of Queensland conceded that she would most likely hold the state balance of power with a projected 16% of the vote. In West Australia, another state with an impending election, One Nation is polling slightly over one in ten voters, and in Victoria, the very stronghold of Australian socialism, the number is only slightly less.

And Cory began to stir.

Flitting in from exile at the UN, he began to marshal his forces, not to finally begin the non-party activist organisation that could unite Australians on the right as GetUp! and other groups do for the left, but to start a micro-party of his own.

Because obviously with One Nation, The Liberal Democrats, The Shooters and Fishers, Rise Up Australia, Family First, the Nationals and the Australian Liberty Alliance, clearly what Australia was in dire need of was another party on the right.

Oh wait; no, that is the exact bloody opposite of the truth.

The problem for the right in Australia has always been the lack of a banner to rally behind. Rightists of all stripes tend to be so independent-minded as to make the perpetually-splitting Trotskyite grouplets look stable by comparison.

The hurt feelings and envy when the Australian Liberty Alliance, the great hope of the more activist side of the right (myself included), failed to perform at the election and was swamped by One Nation was bitter, but the sting had started to fade.

People on the right were beginning to see that for all her faults, Hanson had a common touch very few other politicians in Australia possess.

And despite the bad optics of candidates being defenestrated for minor infractions, such actions only seemed to prove that over the last twenty years, the lady from Queensland had learned a thing or two about herding the cats that comprise the patriotic Australian right.

Then Cory decided that HE and the People’s Front of Judea are the answer to all our prayers.

I can sympathise a little; clearly he couldn’t have stayed in the Liberal Party for much longer, as the Leftists that now control the party machine had already managed to knock him down a peg or two on the Senate ballot in South Australia.

One XYZ contributor wrote a piece suggesting that the split could be good for both Bernardi and Turnbull. That seems slightly optimistic.

The best case scenario has Bernardi splitting the patriotic vote and maybe eating into the right flank of the Libs. But considering that there are five parties already doing that, it is difficult to see what he achieves.

Worst case scenario is that his outsider protest vote gets eaten by the already established minor parties in South Australia.

In a saturated marketplace stuffed full of Xenophon stooges and with an established Family First vote, it’s not impossible that Bernardi could sink without a trace in his home state, perhaps stalling the momentum the right has built up since the backstabbing of Abbott, as well as wasting the efforts, funds and abilities of talented and well-meaning supporters.

There is so much downside and very little gain. What the h— is Bernardi hoping to achieve that One Nation is not already doing? Why not join them and add his experience and professionalism to an outfit that could dearly benefit from it?

Bernardi is a relatively young man while Hanson is nearing retirement age. If he helped make her party a success, who on earth does he think would be first in line to be the next leader?

Cory says that he can’t join One Nation because they are too protectionist and not libertarian enough.

In that case why not join the LDP?

If they’re not socially conservative enough, why not Family first?

If they’re too Christian, why not the bloody ALA who we know you’re in contact with? Why not the Shooters and Fishers?

What, aside from vanity and a few comforting backhanders from Gina Rinehart, could convince Cory to act in such a short-sighted fashion?

Turnbull is in crisis, the few remaining fake conservatives inside the Liberal Party are in despair, One Nation is now matching or beating the Greens in every significant poll, and Cory decides to play Don Quixote and ride off on his own to tilt at windmills without even a Sancho Panza to carry his bags.

So much promise, so much hope, so much wasted time and so many wasted resources piled up on the funeral pyre of one man’s ego.

I hope you’re happy, Cory, but sadly I don’t think you will be.