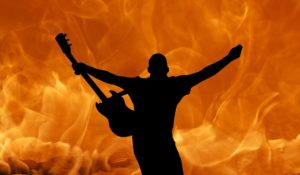 I find the arts industry interesting – well, mostly the music side of it. They all gripe and moan about the political right not doing the best by them, and have a sook about humanitarian issues on social media (you know, without actually doing anything about it) and of course it’s all the right’s fault, when actually it should be the right side of politics they should be supporting.

As an artist you’re not only a creative individual, you are a small business whose primary income is from your creativity. To be successful, you’re required to not only create pretty things but market it, exploit it, make deals and contracts, and the list of responsibilities goes forever on with similarities to other businesses.

Instead of working different ways to have their media in the public arena in a way that is profitable, they sit back crying that venues are closing down, that no one goes out anymore, that they should be given more support.

Let me cover these points:

Now, this happens for a number of reasons. Recently in Melbourne a lot of venues were forced to close due to residential complaints about noise, and due to low patronage or poor financial planning by the owners. They weren’t protected, and had to go, and since then a good policy has been put in place where established venues have sound-proofing paid for by developers (or the development has a greater level of sound proofing, anyway i digress from the original point of this…) The point is, there are many reasons places close. People get bored. Some managers are not great managers of a business, because face it, some people aren’t cut out for it. It’s not always the government’s fault. But you know it can’t be the artist’s fault now can it?

2. No one goes out anymore!

It’s a cry I have heard from many places and musicians. Times change, and TVs have gotten much bigger with the power of the internet behind them. People are, from my observations, becoming less and less inclined to leave the house; even when they have already purchased tickets. If you look at any successful businessman/woman they have adapted to change, sometimes subtly, other times drastically! If you want your media to be noticed, you have to do it in a way that’s going to get into the minds of people; then maybe, just maybe, you’ll bring some folks out of their rock for a little bit.

Financial support? How? Like the Greens Centrelink artist policy? Yeah right! That’s just devaluing art even more! If you want government support then seek the government, whichever party you support, and see if your work will assist them in advertising or promotion. If you want support, make it the sort of support that is beneficial for both yourself and the giver, instead of just lazy you sitting back on your Mac tweeting about how much the government sucks and how bad white male christians are!

For those that are creative be creative in business as well as art and see how far you can actually go!