I’m guessing there are quite a few awkward conversations happening at the country clubs around Hollywood right now. 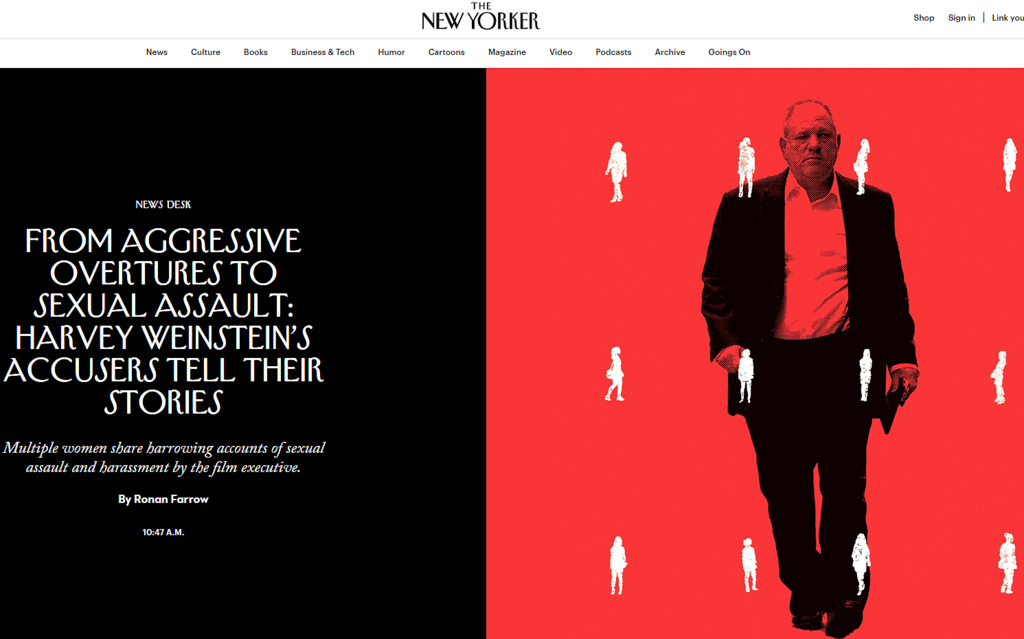 And as always, the mainstream media is not interested in really investigating how it was that a serial sexual predator could get away with molesting half of Hollywood (the female half) and still be lauded and feted by celebrities, journalists and presidents.

They knew. All of them knew. And they know that Weinstein is just the tip of the iceberg.

When New York Times journalist Sharon Waxman was researching a piece exposing Weinstein exposing himself to actresses in 2004, she was shut down. Russell Crowe and Matt Damon even contacted Waxman personally telling her to shut up.

The Clintons and Obamas have long had ties to Harvey Weinstein, attending his premieres and accepting campaign donations from him.

We call that getting Tucked, Hillary.

Former President Obama even sent his daughter Malia to work as an intern for Weinstein. Maybe the first word in your Twitter bio shouldn’t be ‘Dad’ anymore, Barry? Just a thought.

Weinstein is the type of shadowy powerplayer whose corrupting influence is felt across entertainment, politics and the media today. What George Soros is to communist terrorist organisations, Harvey Weinstein was to the Hollywood propaganda juggernaut.

Over the course of 1400 awards acceptance speeches by Hollywood celebrities, Weinstein was thanked more frequently than God.

Meryl Streep even called Harvey Weinstein ‘God’ in one of her acceptance speeches. Not smart, Meryl.

God is not mocked. He is patient, but when judgement comes for you it will come suddenly and ferociously. And whether you believe in Him or not, it’s coming for the perverts and enablers who have used their power and fame as a cover for their criminality.

Streep, who sanctimoniously used her Golden Globes acceptance speech this year to pillory Trump as the most evil monster in the galaxy, covered up for Weinstein for years.

She denies it. Bullshit. So does Judi Dench, the old British chick who enjoys pretending she’s an aristocrat. More bullshit.

Everyone in Hollywood knows that, around the world, movie industries are run by vile, lecherous creeps who use the promise of fame and wealth to get sexual favours from young actors and actresses. It’s how power works. Those with it use it to slake their lusts, and human nature being what it is those lusts become more depraved the more they are indulged.

Even establishment shills The Young Turks have covered it.

It’s also why so many of the US and British elite flew on Jeffrey Epstein’s ‘Lolita Express’ plane to his island to party with underage girls. Epstein was most probably also an intelligence asset, collecting evidence that could be used to blackmail powerful people later.

That’s an old trick, you know. Founder of the FBI J. Edgar Hoover was infamous for it.

So the faux outrage and pleas of innocence are just more revolting, self-serving lies by people who thought they were above the law.

But there’s a deeper question at play. Apart from wealth and as a gatekeeper to fame, how was Weinstein able to avoid exposure for so long? Answering this question reveals a pattern of behaviour which goes across the leftist establishment.

There have always been lecherous, powerful men who used their position to exploit young women and girls. The stories of medieval jus primae noctis, although fabricated by later socialist historians, were believed because people understand that there are always powerful men who are rapey perverts.

Unscrupulous men with power will use that power to get sex. It’s not rocket science.

What has happened over the past half-century, however, is that degeneracy which was confined to the bohemian fringe or the inner sanctums of power has now become society-wide. As Hollywood has colonised us culturally, it has infected us with its decadence and immorality. Our society is now full of Harvey Weinsteins, thanks to our abandonment of traditional morality and its replacement with feelgood moral relativism.

The far left elite use identity politics and cultural Marxist virtue-signaling to give themselves an illusion of self-righteous moral perfection. This puts them above moral reproach, which is of course a very dangerous place to be. Those who believe they can get away with anything will end up doing everything.

The same Hollywood starlet who beats her hairdressers will be sure to wear a pussy hat in protest against Trump, and a CEO on the make who bullied his way to the top will be sure to be photographed smiling at a fundraiser for breast cancer.

It’s phony moralism, a self-righteous smokescreen for people who are utterly self-serving and even depraved in their private lives. And it’s now everywhere.

We buy this nonsense because, as a culture, we’ve rejected traditional morality in favour of a fake moral system invented by intellectuals in the 20th century. As Nietzsche foresaw, when we abandoned Christianity and ‘killed God’ (as he put it), we lost true north on our moral compass and have been flailing around in moral chaos ever since.

Men like Harvey Weinstein loved the sexual revolution of the 60’s and the culture it created. It provided exactly the environment that men like that needed to indulge the darkest parts of their nature.

When young boys are flooded with pornography during their formative years, why are we surprised when some of them become paedophiles and sexual perverts as a result? When young girls are propagandised to be promiscuous with every chad in town, why are we not surprised when this creates an army of man-hating feminists who are permanently damaged as a result?

Traditional sexual morality was not developed over millennia to oppress women. That’s yet another neo-Marxist lie. It protected them. It also protected the majority of young men from the corrupting influence of unfettered fulfillment of every sexual appetite.

If you slept with a girl 100 years ago in Australia, her brothers, uncles and father were going to come with shotguns to make sure you married her. If you were already married, they’d shoot you. Racking up 100 virgins like an alpha chad these days was out of the question. That system of virtue-policing, which feminists decry now as so oppressive, protected women and civilised men.

We can never eradicate sin. All we can do, particularly for young people, is have the moral courage to shield them from it as much as possible and warn them of its poisonous bite. The far left establishment has convinced themselves instead that evil results from a lack of information, so rather than protect our young from its destructive consequences they’ve exposed them to even more of it.

When young women throw away their sexual value in the pursuit of a Sex and the City lifestyle myth, they forever damage their relationships afterward. Biology is just sexist that way, and believing we can tinker with the operating software of society with no adverse consequences has created enormous harm during the postwar era.

Due to the faulty morality of Western Marxism, we are perplexed when evil appears. Our ancestors knew better. Evil is not a problem caused by an ignorant mind. It springs from the human heart, and can only be fought by starving it of what it wants.

Discipline, not education, is the foundation of good character.

The uncomfortable fact about human nature that we must face is not just that vermin like Weinstein exist. It is that most people, if they think it will cost them in terms of reputation or finances, will hide even the most awful truth and protect the wicked against their victims. Most people will only do what is good if it will cost them nothing, and postwar idealism about human nature has allowed a proliferation of evils in the West not seen since the most decadent period of the Roman Empire.

If those people can then compensate for the resultant guilt by blaming it all on Trump, they’ll do it. This is how Western Marxism creates narcissistic, immoral creatures who project their guilt onto others. It gives them the excuse to do whatever serves their own selfish interests and still pretend they’re good people.

The global slave trade in children is driven by elite paedophilia, which in turn is covered up by the mainstream media. When information started to leak out to the public, the MSM created the derisive term ‘pizzagate’ and managed to convince the low-info normies that there was no such thing.

There is such a thing, and if we are not willing to face that truth then we are also enablers who perpetuate the cycle of suffering for those voiceless, faceless children.

For them, love is anything but free.