Here is a visual representation of what happened to Yumi Stynes when she thought she could bully Kerri-Anne Kennerley with the charge of racism:

For too long, the crybullies of the left thought they could just fly in the window, poo all over the carpet, make us scramble to let them out and then fly off to let us clean up the mess.

Let’s make it clear that nobody here at your XYZ condones making threats of any kind against anybody, particularly as we and other conservative activists know all too well what it is like to be on the receiving end of it.

But it is what it is. As a bare shouldered Yumi explains, she copped it. And she never saw it coming. 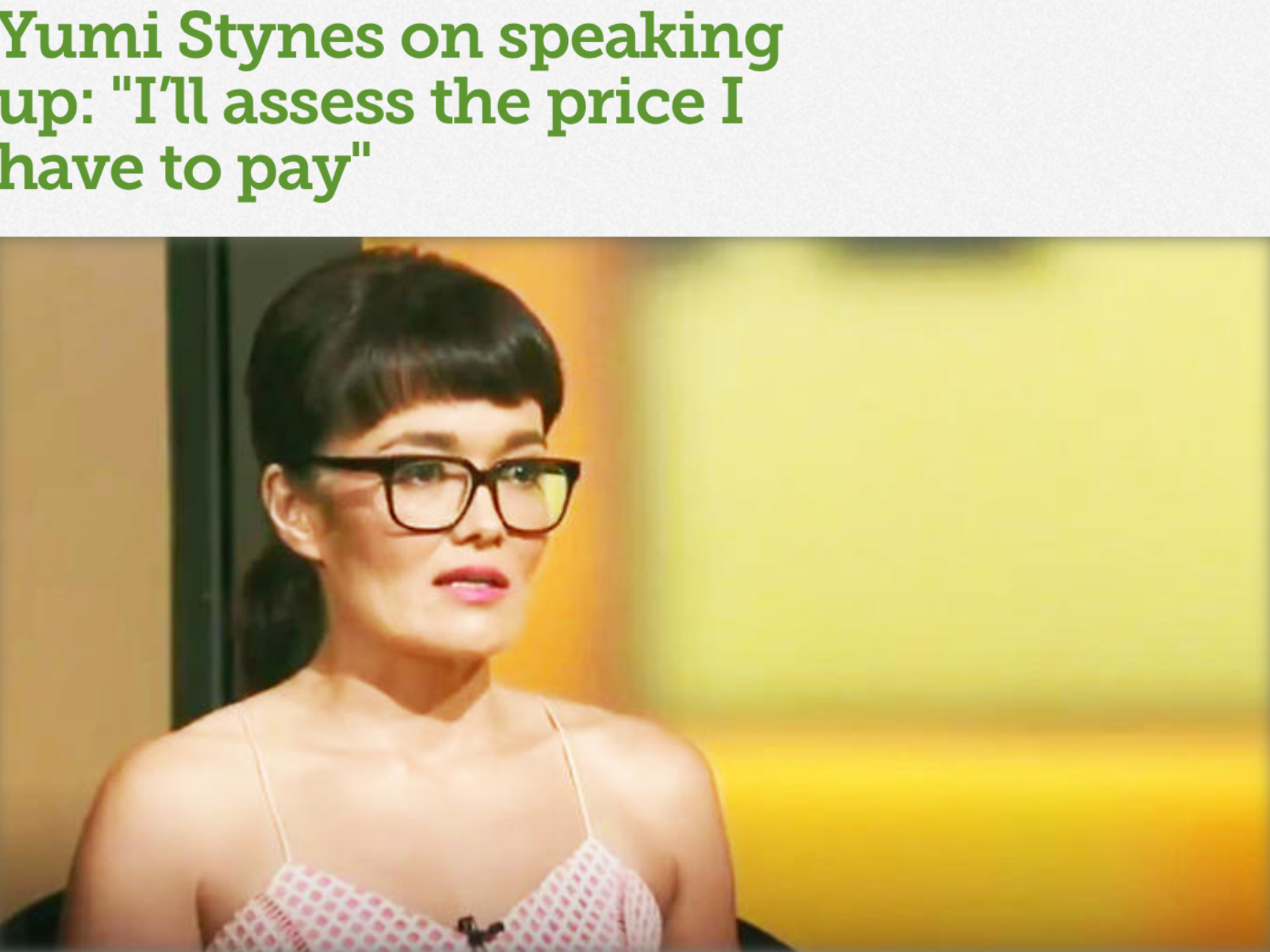 SBS presenter Yumi Stynes has spoken out about the harassment she experienced after an on-air spat with fellow broadcaster Kerri-Anne Kennerley.

The presenter said she was stalked by paparazzi outside her home and received death threats online after her television segment with Studio Ten panellist Kerri-Anne Kennerley.

Correction, SBS. After Kerri-Anne Kennerley brought up the inconvenient fact of abuse inside indigenous communities, Yumi thought she could bully Kennerley into silence and make sure she stayed on the #ChangeTheDate message. Instead, KAK fought back and shoved the “I’m offended” weapon back in her face.

Kerri-Anne Kennerley vs Yumi Stynes, what it really means

It must be pretty uncomfortable, when the hunter becomes the hunted:

“It’s incredibly gross to experience,” Stynes told ABC One plus One host Jane Hutcheon.
Stynes said the abuse made her think twice about speaking out in public.

“The next time I feel compelled to speak up I’ll assess the price that I have to pay. Do I want a guy outside my house pointing a camera and me and kid? Do I want death threats over the internet?”

Stynes said the abuse made her feel scared and panicked.

“That is the way they keep us squashed down,” she said.

“You feel scared and also sense of panic and kind of  wanting to flee in whatever way you can.”

Yumi Stynes has built her career on being a cog in the machine that keeps ordinary Australians squashed down. Here she is berating white men for existing:

Did you watch the whole vid? I didn’t. But our taxes pay for this rubbish. The current system until very recently rewarded those who played the victim and promoted degeneracy, while punishing those who stood up for ordinary people and traditional values. This system came into existence because conservatives failed to push back decisively against the far left’s march through every institution in the West. Thus the communists and the globalists were able to shift the Overton Window so far to the left that somebody can base their entire public persona on bashing white men at no cost.

All that has changed.

A few years ago, Yumi could have expected back up from blanket headlines calling for Kennereley’s dismissal, and an online rage mob which would have pummelled KAK into making a tearful apology.

But the people are sick of this nonsense. Patriot and nationalist activists have started shifting the Overton Window back, and Yumi Stynes slammed into it face first. She gave that interview to SBS because she thinks that maintaining her status as a victim will save her. Instead she may have to take a leaf out of Yassmin’s book and flee the country for a while.

You heard the woman. Yumi Stynes will think twice before using the slander of “racist” again. And the rest of the disgusting band of media whores who hate white people have taken note.