Coming into the 2014 Victorian State Election, many perceived the election as a choice between 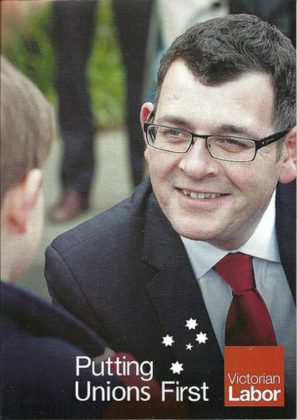 a Liberal State Government which had done little good and little harm in its 4 year term, or the Labor Opposition led by Daniel Andrews which had promised the removal of 50 level crossings and the cancellation of the East-West Link. But little did we know that we would elect a hunchback socialist who would seek to transform the great state of Victoria into a satellite state of the USSR.

The last two years of Daniel Andrews’ government have been nothing short of a major f— up. I will outline five policies/actions/inactions of Daniel Andrew’s which have made Victoria a less enjoyable place to live in.

1. Cancellation of the East-West Link.

If you have ever tried to drive into the far eastern Melbourne suburbs of Ringwood or Croydon, you will know that getting there is a living nightmare. Those suburbs are highly in need of a new highway to get them to the city and to reduce congestion in the area.  (Editor’s note: also, to get from the West of Melbourne to those Eastern suburbs, or vice versa, is extremely difficult, having to navigate a major thoroughfare which goes from 3+ lanes to 2, then to 1, across the inner north!)  However, Daniel Andrews and his cronies are at the behest of the Thomas the Tank Engine Lobby (yes, that’s my nickname for the public transport lobbies that control Labor and the Greens) and decided to pay a billion dollars to cancel the road project; a terrible waste of tax payer money.

While the increase in crime cannot be directly linked to Daniel Andrews, his inaction has let the problem grow. Melbourne is slowly becoming the Australian capital of car-jackings, home invasions and the APEX gang, with most of these attacks perpetuated by the youth of the Somalian and Sudanese community. At last week’s crime summit, Daniel Andrews said “incarceration is not an option,” with regards to dealing with the recent crime epidemic. So I guess I’d better pack my bags and move to Queensland; at least that state isn’t on its way to becoming a new Johannesburg.

Recently, Daniel Andrews decided to attack a great Australian institution, a glowing example of Australia’s culture of volunteering, and really the hallmark of country Victoria: The Country Fire Authority. The recent EBA between the Andrews government and the United Firefighter Union is a direct curtailment of the powers of the CFA, an organization largely made up of country volunteers, who have been a great help throughout their history in combating some of Victoria’s brutal bush fires. One aspect of this deal states that seven union-backed firefighters must be in attendance of a fire, for every one CFA volunteer, thereby limiting the power and the independence of the CFA. So far, Andrews’ own Emergency Services Minister has quit over the deal, and the CFA board has been fired. Andrews has clearly only signed this deal to help his mates in the UFU who helped him get elected, and since only 10% of firefighters in Victoria are paid and under control of the union, this is a deal that only benefits a small minority.

Daniel Andrews has devised an ingenious way of removing level crossings: Instead of moving the rail line underground, as it has been done at Gardiner Station and along the Frankston line (both planned by the previous Liberal Government), Daniel Andrews has decided that he will build the rail over ground, on top of a 20m tall concrete bridge that will run for 8kms along the Pakenham Line, and even the Sandringham Line. Even though there is no business case, and not a single sound and/or environmental test has been carried out on the planned project, Daniel Andrews has given it the green light. There has also been a large public outcry in the areas affected and many are complaining about the lack of public consultation. Not good Dan.

Last year, Daniel Andrews said he would keep the Safe Schools Program unchanged in Victorian state schools, even if the federal government decided to alter the controversial program. In this year’s budget, Daniel Andrews also decided to splash $15 million on a gay pride center, another waste of tax-payer dollars. Clearly, Daniel Andrews is only trying to increase the size of the Marxist indoctrination program in Victoria. I bet you it won’t be long until Victorian schools have mandatory trips to the gay pride center as part of the Safe Schools Program.

At the end of the day, we have a chance in two years’ time to vote Andrews out. Unfortunately, during that time Andrews can seek to further damage our great state. My advice to those living in other states, is never vote in a Labor state government or you will have to deal with the c— Victoria is dealing with.