On the eve of the outbreak of World War I, British Foreign Secretary Sir Edward Grey is quoted as saying “The lamps are going out all over Europe, we shall not see them lit again in our life-time”.

Those lamps never came back on. We’ve been living in a fading gloom ever since. Don’t believe me? Look at our buildings, our music, our art, our literature, ourselves. We’re half-savage.

Like Sir Grey, I fear that now even that dim gloom is about to be dispelled, and there will not be lamps lit again. Anywhere. Ever.

On Monday April 9, Israeli jets launched a series of missiles at the T4 airbase in Syria, destroying installations and killing up to 12 Iranian personnel as well as Syrians. Key Russian ally Iran has vowed to respond to the attack.

In reaction to allegations of a chemical weapons attack by Syrian President Bashar al-Assad on his own people on April 7 in the town of Dhouma, President Trump has promised to make a decision on a Syrian attack over the coming day. The United Kingdom and France have indicated that they will join any American-led military strike on the oil-rich Middle Eastern nation. Saudi Arabia, which recently received a record arms sale from President Trump, is also on board.

At the time of writing, US military forces are positioned and awaiting orders from the president. An aircraft carrier battle group has also been dispatched.

In addition to USS Donald Cook, US has now dispatched USN Carrier Strike Group 8 to the Mediterranean/Syria

Senior Russian officials have stated that they will respond with force should Syria be attacked by the US and its allies. Russian Su-34 fighter jets armed with anti-ship missiles have already been seen flying over the Russian port of Tartus in Syria, and Russia has moved military hardware away from vulnerable areas in preparation.

Russia vows to shoot down any and all missiles fired at Syria. Get ready Russia, because they will be coming, nice and new and “smart!” You shouldn’t be partners with a Gas Killing Animal who kills his people and enjoys it!

The pretext given for this imminent attack on the Syrian government by Western forces is a supposed chemical weapons attack by Syrian President Bashar al-Assad on his own people in the town of Dhouma.

….to pay. Open area immediately for medical help and verification. Another humanitarian disaster for no reason whatsoever. SICK!

It’s weapons of mass destruction all over again. At a UN Security Council emergency meeting on Monday night, Russian Ambassador to the UN Vassily Nebenzia stated that Russian inspectors visited the site of the alleged attack and found no evidence. The Russian envoy also said that Russia supports sending a team of impartial UN investigators to see whether the chemical attack took place. US Ambassador Nikki Haley responded that the US need provide no evidence of yet another chemical weapons attack by Assad and that Russia had the “blood of Syrian children” on its hands. The American delegation then left the room before the Syrian ambassador had a chance to respond to their assertions.

This is the same Nikki Haley who has been calling for the overthrow of Assad constantly for years, with all the accompanying spilled blood and lost treasure that has entailed.

Obama tried to invade Syria on the phony pretext of a chemical weapons false flag in 2013, coincidentally in the same area as this month’s attack. Conveniently enough, he’d declared shortly before that the use of chemical weapons would be a “red line” for American intervention. 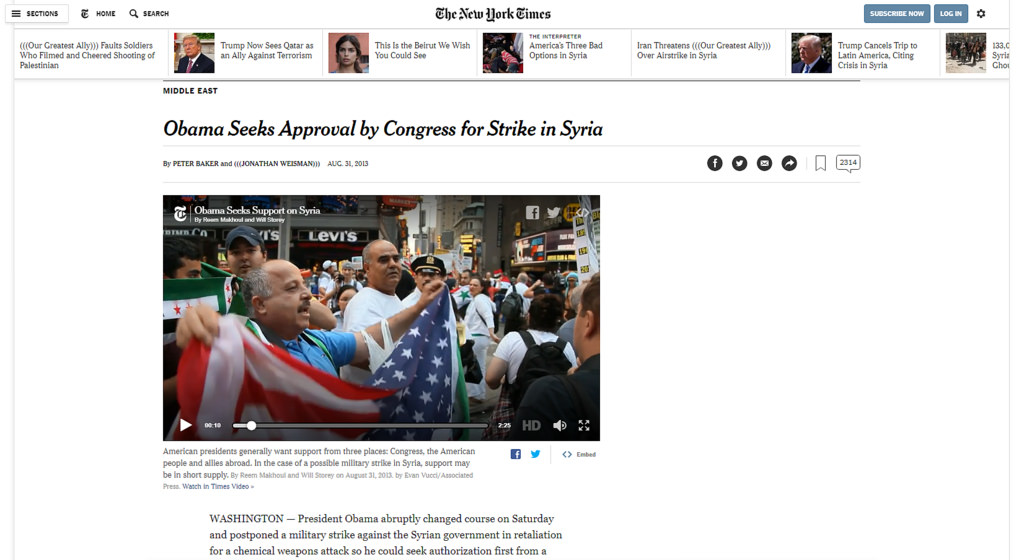 The Republican-controlled Congress voted him down and he was prevented from acting unilaterally. For chickenhawk Senators John McCain and Lindsey Graham, the problem was that Obama’s proposed action was not big enough.

In response, the deep state determined to use jihadi proxy forces. A ragtag rabble of raghead fanatics was assembled by the intelligence services of the US, Israel, Turkey, Saudi Arabia and Europe and presented in the media as ‘rebels’ and ‘freedom fighters’. ISIS was one of these groups. 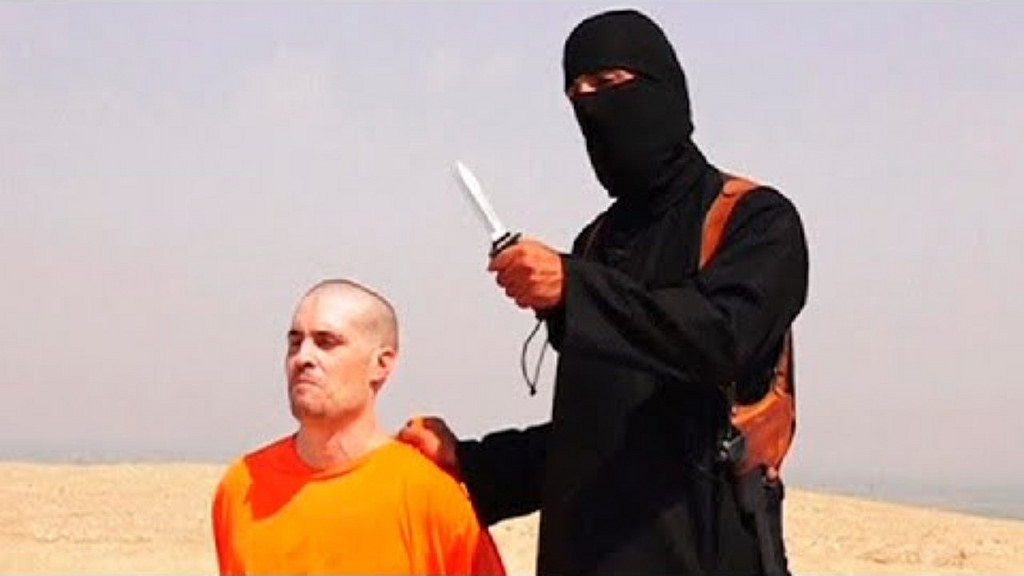 It’s almost like something you’d see in a movie.

It was this strategy which also led to the European migrant crisis which has brought so much enrichment.

In response, Assad appealed to ally Russia for support. At first, the Russians supplied equipment and training. On September 30 2015, however, the Russians got directly involved and began bombing jihadi targets across the country.

Russian intervention turned the tide and, along with Iranian support, provided the Syrian government with enough strength to be able to crush ISIS and drive out most of the Western-backed jihadi forces in Syria. Particularly gruesome was the reconquest of Aleppo; our deep state media made sure to push the narrative that Assad was the aggressor to drum up support for intervention from an uninformed public. 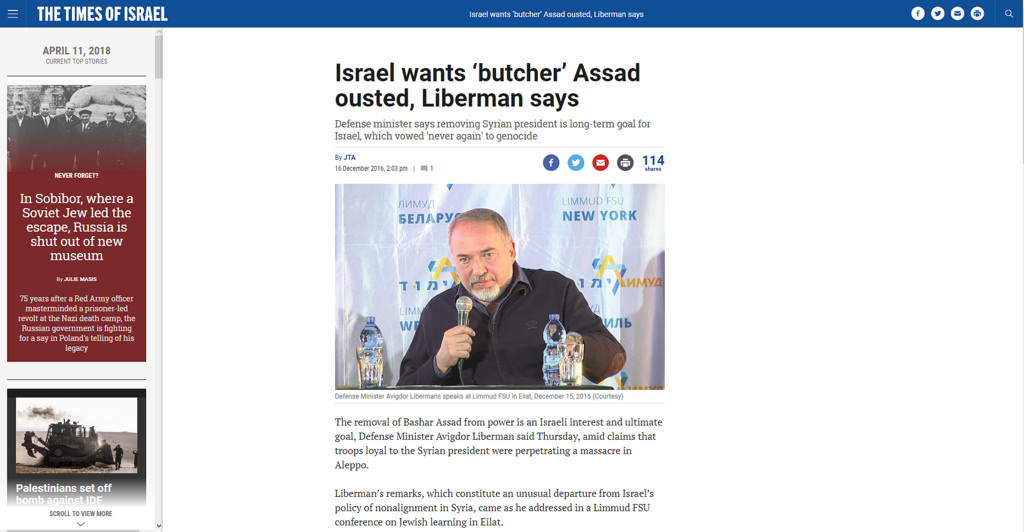 During that reconquest of Aleppo, the Russian air force bombed a bunker which held 30 agents from the CIA, Mossad and other Western intelligence agencies. Russian media stated they were providing logistical and strategic support to the jihadi forces.

One of these groups is Jaysh al-Islam, which is supported by the CIA, Mossad and other Western intelligence services and captured Ghouta, to the east of Damascus, in an uprising in 2014. With US and Israeli support, they’ve held the area ever since. By any metric, these are people our media has conditioned us to call ‘terrorists’. They are fanatical Wahhabists who torture civilians and cage them for use as human shields. 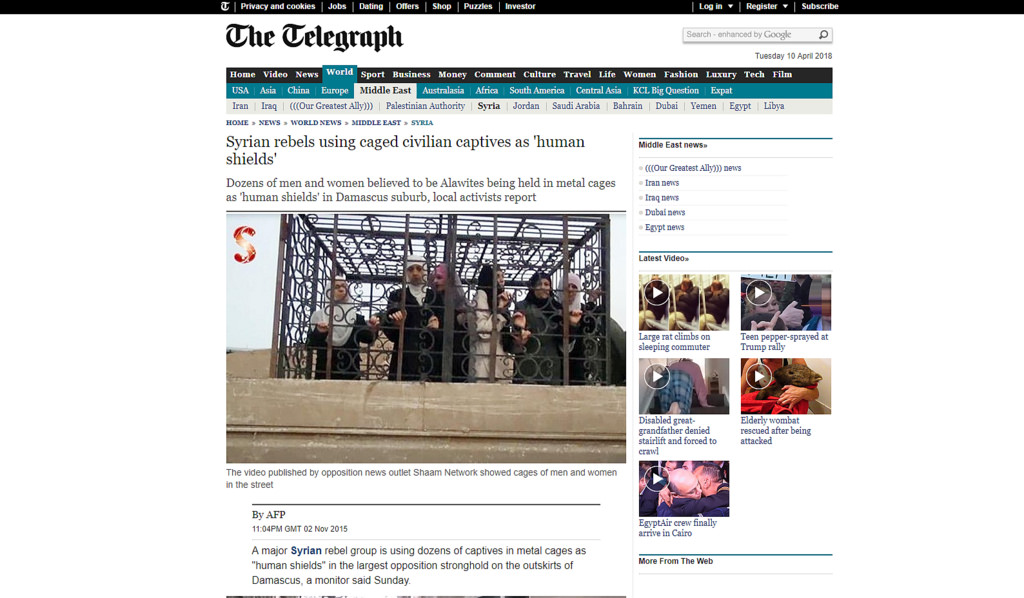 Those people in the cages are Alawites, the ethnic group of Bashar al-Assad. And the people doing it to them are the ‘rebels’ our own government has been supporting, and are clearly the ones who carried out the chemical attack in Dhouma.

Even the Jerusalem Post reported in mid-March that the Syrian army found a chemical weapons workshop near Dhouma run by the Western-backed jihadis.

This staged chemical attack in Dhouma is merely the latest in a series of false flags carried out by Western-supported jihadis. One year ago almost to the day, the town of Khan Shaykoun in the Idlib Governorate of Syria was hit by a chemical attack which killed dozens, most of them women and children. Our deep state media immediately began building support for war against Assad, and President Trump obliged with 59 missiles against the al-Shayrat airbase. This was despite General Mattis admitting later that there was no evidence Assad did it. 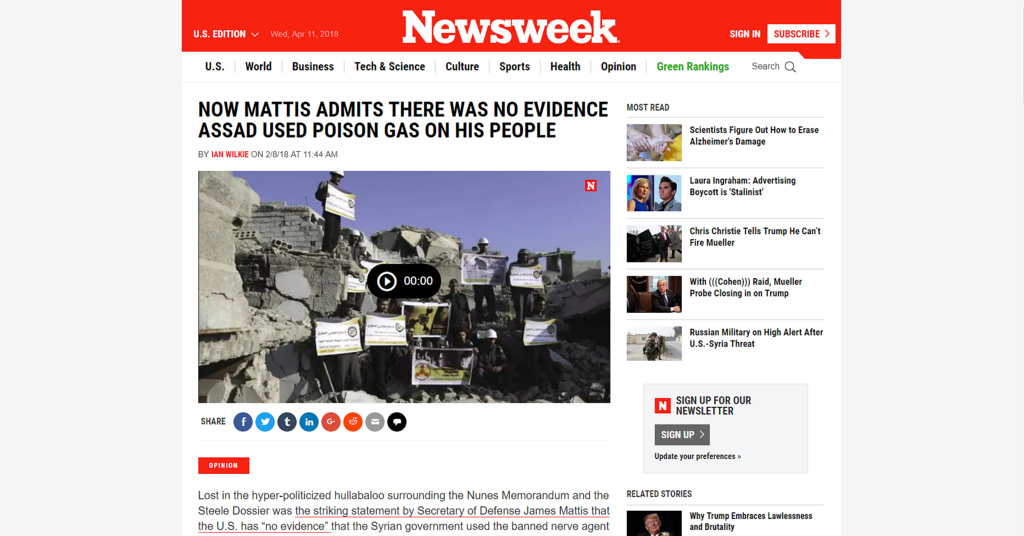 This chemical weapons attack pretext for war, like the 2017 gas attack in Khan Shaykoun, and the weapons of mass destruction in Iraq, is a lie.

It’s the same lie again and again and again. And as things stand, it seems this will be the pretext that the deep state will use to start World War III against Iran, Russia and China, cheered along by our mainstream media and puppet politicians.

Not only is the evidence disproving the Western narrative, it makes no sense at all for Assad to do it right when he’s on the cusp of victory. 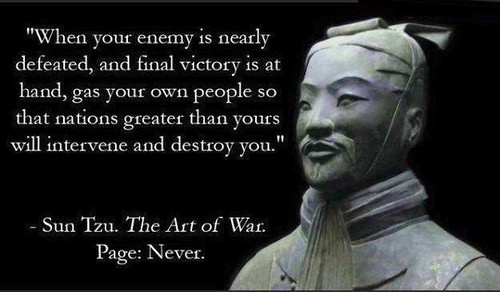 So did Trump back in 2013 before he got the launch codes.

AGAIN, TO OUR VERY FOOLISH LEADER, DO NOT ATTACK SYRIA – IF YOU DO MANY VERY BAD THINGS WILL HAPPEN & FROM THAT FIGHT THE U.S. GETS NOTHING!

But saying 2 + 2 = 4 in the current year makes you an alt-right conspiracy nut. 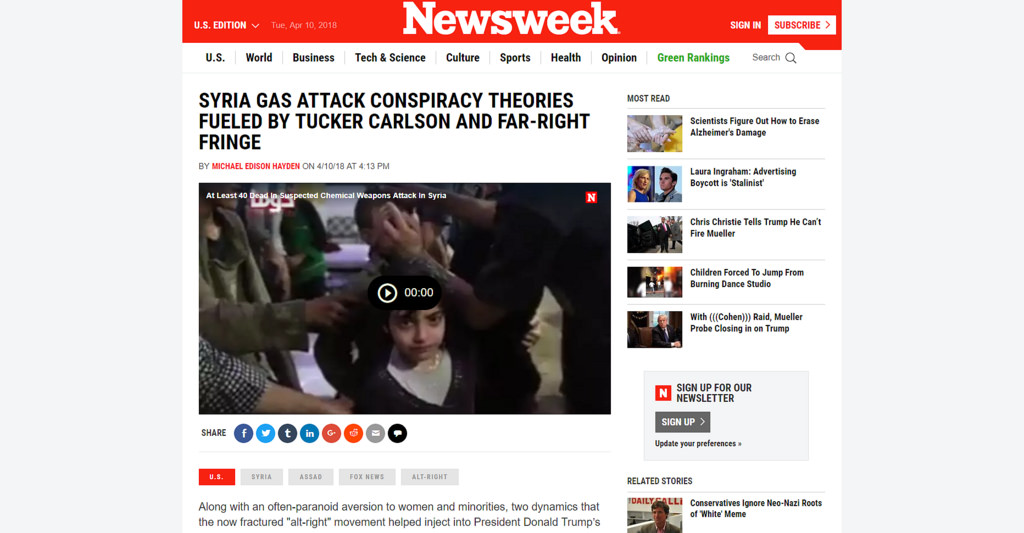 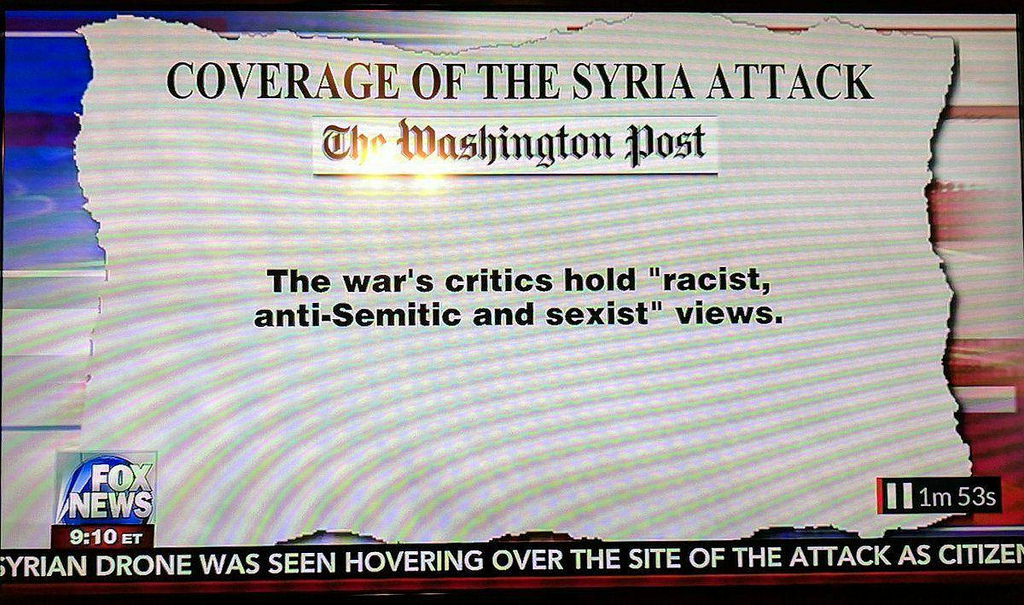 Maybe not this week. Maybe not this month. Maybe not even this year. Soon, however, World War III is going to start in the Middle East, because the US empire is run by a deep state cabal of fanatics obsessed with world domination. And they are baying for blood. 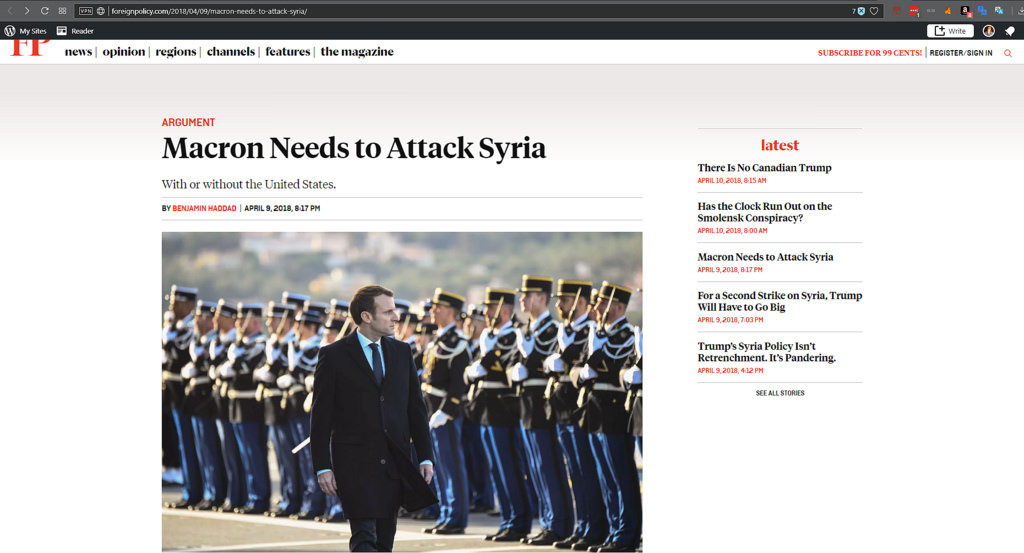 Of course, there is never one reason for war. In the bigger picture, the puppet politicians of the West are driving us headlong toward war because that’s what declining empires do when they have made too many promises to public employees and citizens and they can no longer pay the bills. Rather than default and face the fury of the mob, they throw the chess board in the air and start a war. And decadent, distracted, degenerate populations like us let them.

This agenda has been planned for a long time, however. It’s been a neoconservative goal for decades now, and just as cultural Marxism is destroying us within, neoconservatism has been killing us without.

The plan to overthrow the governments of Iraq, Libya, Syria and finally Iran was hatched by a cabal of neocon intellectuals at the think-tank named the Project for the New American Century (PNAC). Although neoconservatism had been developing for decades prior, it was in 1997 with the establishment of the influential think-tank that the agenda became clear. The members of PNAC were names that became familiar to us as they went on to fill positions in the Bush 2.0 and Trump White Houses and with companies like Halliburton and Genie Oil. These men, and their supporters, have been the ones responsible for the bloodshed and misery in the Middle East for the past 20 years.

In PNAC’s seminal report published in 2000, these bloodthirsty imperialists acknowledged that America lacked the political will for an invasion of the entire Middle East. They then stated that there would need to be some “catalysing and catastrophic event – like a new Pearl Harbor”. Conveniently enough, 9/11 provided just that.

That’s not a conspiracy theory. General Wesley Clark has admitted as much.

And yet more golden-haired Aussie boys will die for ideological delusions and stone-cold greed, bleeding the lifeblood of the nation into foreign sand while we tell ourselves soothing lies to pretend it was worth it. 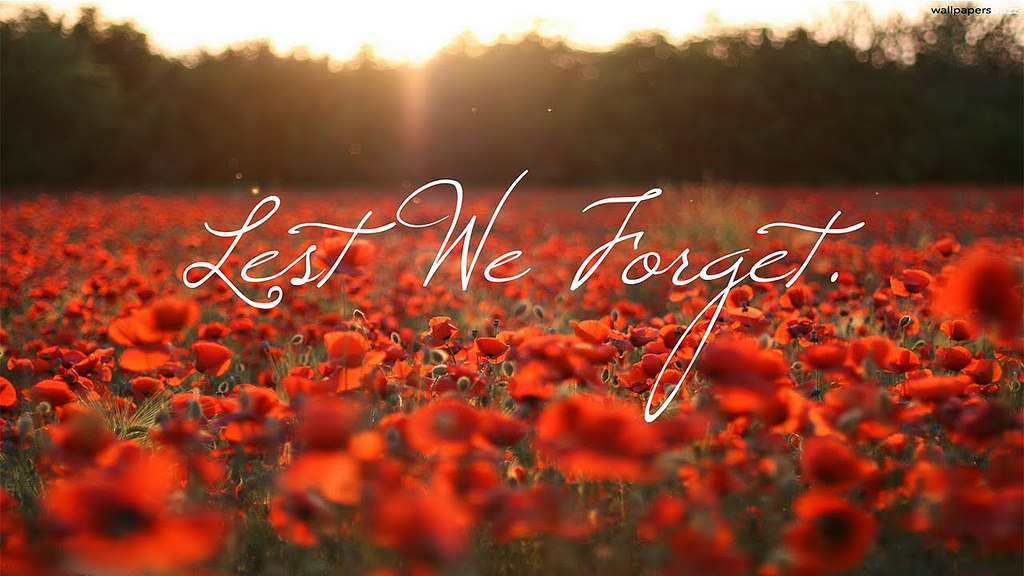 We forgot a long time ago.