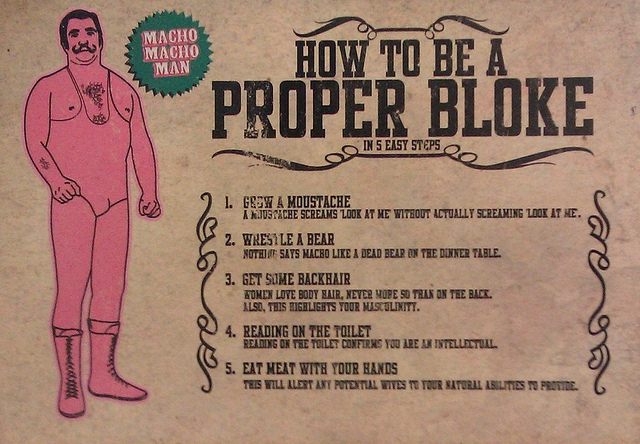 Today I came across an article to which I couldn’t help responding. It was titled, Masculinity Is Killing Men: The Roots of Men and Trauma. While I knew it would most likely leave me spitting in my morning soy cappuccino, like the television shows on traffic police that my husband devours I couldn’t resist diving in.

The article makes the disturbing claim that “turning boys into men” is a “damaging process” and quotes Joe Ehrmann as saying, “The three most destructive words that every man receives when he’s a boy is when he’s told to ‘be a man.’”

As I reacted to this with a sensation akin to spikes coming out of my shoulders (as perhaps you have too), it is immediately clear that what we are dealing with are disparate notions of what it means to “be a man.”

Today’s ‘progressives’ have done a good job of telling us that masculinity is about telling young boys to straighten up, hit their brothers, and not cry at funerals – or worse, tells them to drown their sorrows instead of learning to deal effectively with their emotions and impulses. Indeed, the author paints a disastrous picture of it means to be raised in this “poisonous” way:

“The result of all this—the early denial of boy’s feelings, and our collective insistence that they follow suit—is that boys are effectively cut off from their feelings and emotions, their deepest and most vulnerable selves. Historian Stephanie Coontz has labeled this effect the “masculine mystique.” It leaves little boys, and later, men, emotionally disembodied, afraid to show weakness and often unable to fully access, recognize or cope with their feelings.”

But the truth is, this is not what we mean today by “masculinity.” Nor has this drug-taking, depressed, repressed and underdeveloped strawman EVER been what conservatives mean when we speak of “turning boys into men.”

The article’s critique that at times society presents counterfeit concepts of manhood and womanhood (true enough) does not mean that the idea that young people need to mature into men or women doesn’t hold water. Very few people genuinely believe that taking potentially decades to transition into adulthood (a well known trend in my generation) is a healthy way to live. – Joe Ehrmann definitely doesn’t, seeing as he is the minister behind “Building Men and Women for Others Ministries.”

Moreover counterfeit views of womanhood and manhood may actually be flourishing more today (Slut Walk anyone?) because we have left a gap in the market by failing to provide the genuine article.

Yes we should pay attention to how we treat boys and girls as babies. One study I recall found we are more likely to face baby girls towards us and baby boys away from us, and this may well be useful information. However suggesting all gendered treatment is harmful, is a huge leap from showing that some gendered treatment exists.

And yes the way some people have characterised what it means to be a man or woman have been wrong. I certainly don’t believe that in order to be a woman I have to be super-skinny or “an unattainable balance of virginal and f**kable” (thanks to the author of the article above for that lovely phrase) – that’s a flawed conception of womanhood.

But it does not then follow that no genuine or healthy conception of womanhood exists.

This is a two part article, and you can find the sequel HERE focusing on how we can do better by both men and women by recognising masculinity and femininity, accepting developmental needs.