Contributing editor for The Monthly magazine, Richard Cooke, outraged Twitter users on Tuesday this week with a joke about the Nazi concentration camp, Auschwitz-Birkenau.

The concentration camp was used by the Nazis as part of their extermination campaign against European Jewry. Official estimates place the death toll of the camp at around 1.1 million.

Mr Cooke’s tweet was in response to a report published by the Institute for Public Affairs into identity politics in the teaching of history in Australian universities. The study, headed by Jewish history scholar Dr Bella d’Abrera, found that some universities are teaching core historical topics while other universities instead focus on themes of gender, race, sexual identity, ethnicity and religion. Out of 746 undergraduate history subjects being taught in Australian universities, 244 were focused on identity politics instead of history.

The IPA's Dr Bella d'Abrera and @Simon_Breheny discuss the findings of our new report The Rise Of Identity Politics pic.twitter.com/v9nRLjQpRe

In the same tweetstorm, Mr Cooke mocked Dr d’Abrera’s PhD as being ‘nothing to do with history’.

Dr d’Abrera’s PhD, which she took at Cambridge University, investigated the extent to which Jewish religious practices survived the Spanish Inquisition of the late 15th and early 16th centuries. Her work built upon the scholarship of Benzion Netanyahu, father of the current Israeli Prime Minister, Benjamin Netanyahu.

Given the impact that Dr d’Abrera is having in her campaign to teach substantive historical topics such as the Holocaust, it is understandable that far left pundits like Mr Cooke are lashing out. Dr d’Abrera’s report on the corruption of university history courses by identity politics was used to support a motion in the Australian Senate this week, put forward by Senator Cory Bernardi.

This is not the first time Mr Cooke has been embroiled in a scandal due to anti-Semitic behaviour. The first time, in 2006, Mr Cooke made national headlines when he posed as cartoonist Michael Leunig and entered one of Mr Leunig’s unpublished cartoons in an Iranian competition for cartoons of the Holocaust.

Despite the incident generating 150 stories over the following days, Mr Cook was never able to explain what motivated him to send in the anti-Semitic cartoon to the Iranian competition.

Whether Mr Cooke will be able to explain himself this time remains to be seen. As we can see from Mr Cooke’s past anti-Semitic behaviour, there are different standards for the left and the right when it comes to historical revisionism. 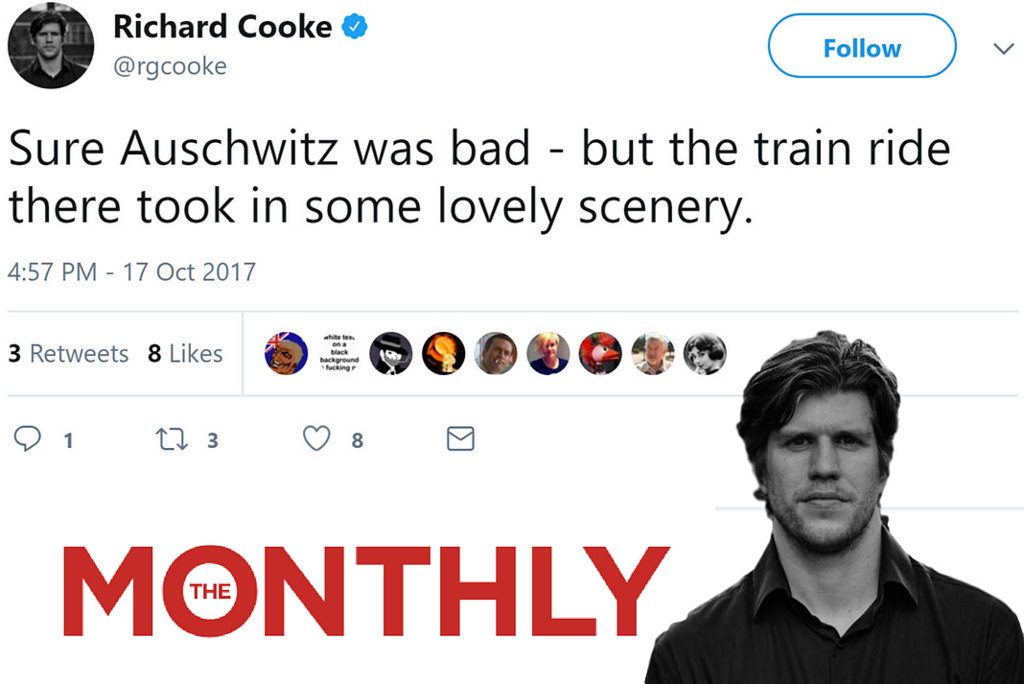