The signs are there that the wheels are beginning to fall off the great climate change fraud. Fresh from her stint scolding the world at the UN, teenage Swedish socialist sensation Greta, (surely a name straight out of something by the Brothers Grimm), was obediently sailed across the Atlantic to yet another conference on why everyone in the world must stop using electricity in order to live. Everyone apart from those advocating for such a radical move of course.

As the desperation to keep this gravy train rolling reaches a peak, so too does the rhetoric involved.

“Notice the words “need” and “must” here? Notice also the word “crisis.” This is a rhetorical tactic beloved by totalitarians. The problem with which they are obsessed is always a crisis, which demands immediate action — “we don’t have a single day to lose” — and anyone who doesn’t share their sense of dire urgency is dismissed as morally inferior: “We cannot just say we care; we must show it.” In other words, you must either show that you care about this issue as much as young Greta does, by doing whatever it is she demands that you do, or else you are to be classified among the untermenschen, subhuman, without any merit or value. You either join her in the work of dismantling “systems of oppression” or you are Lebensunwertes Leben — “life unworthy of life,” as the Nazis described those whom they targeted for eradication.”

The “crisis in human rights” that Greta should be worried about is the constant assaults by Third World goat herder imports on her fellow teenage girls back in frosty old Sweden. But there ain’t much coverage in that one so it’s saving the world from the rest of us for her.

Greta is undoubtedly just a puppet, for now, but behind her is a vast machinery of dedicated world savers who are funded annually by governments stealing money from taxpayers to the tune of over a trillion bucks. It’s great work if you can throw away what few principles you might have once possessed.

That’s what I assume professor Ole Wæver did. Old Ole was once a senior research fellow at the Copenhagen Peace Research Institute. But obviously the cash and credentialism at that career was not up to the ozone layer standards of the climate change rort. Now that he’s not advocating for peace Ole it seems is advocating for war. On behalf of climate change and saving the world from ourselves, of course.

“If there was something that was decided internationally by some more centralised procedure and every country was told ‘this is your emission target, it’s not negotiable, we can actually take military measures if you don’t fulfil it’, then you would basically have to get that down the throat of your population, whether they like it or not,” he says.

We’re going to invade you and destroy your style of life and standard of living, but don’t panic, it’s all for your own good, don’t you know. Presumably this UN army will be staffed by the same third world goat herders currently terrorising the Swedish meatballs. Perhaps that’s Greta’s amazing plan to help out her fellow teenage girls! She was thinking of them after all. What a humanitarian she is.

Look guys, they’re not even bothering to hide it anymore. This is all about control, and power, and the obliteration of everything on which we depend in order to live. Which makes the stakes pretty low I presume. 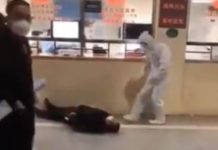