Nazis are everywhere these days, it seems. The way the leftist media carries on, you’d think we live in the Weimar Republic. Then again, maybe we do.

In the latest of its many recent moral panics, the establishment media has spent the last few days frothing at the mouth over ‘white supremacist’ hand signals. Here are some at the White House, no less. You know, the one built by slaves. 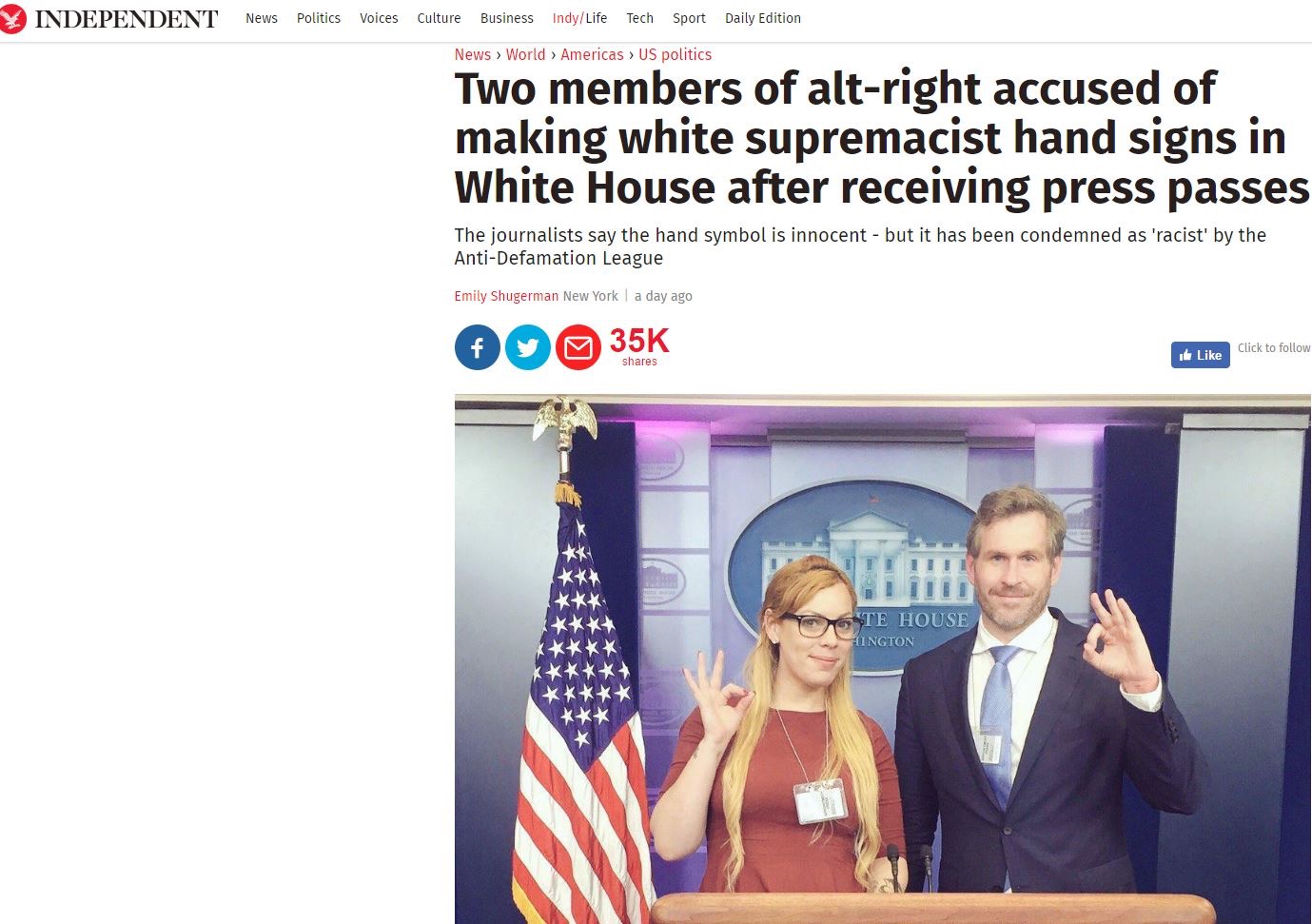 The hirsute figure on the right there is Mike Cernovich, a rising figure in the alternative media who organised the now-famous Deploraball in Washington to celebrate Trump’s inauguration. Across YouTube, Twitter and live-video app Periscope, Cernovich has an audience reach to make any news organisation jealous. Maybe that’s why they’re calling him a Nazi.

There are a few major problems with this headline, and they go to the heart of some of the most pressing issues of our time. Cernovich is Jewish, and is married to a Persian Muslim. He also despises the white identitarian elements of the alt-right, and the feeling is reciprocated. They troll him mercilessly for it.

In one of his biggest breaks recently, Cernovich appeared on Alex Jones’ Infowars as a guest presenter. A viewer pretended to be calling with an innocuous question, and when they got through said to Cernovich, ‘Adolf Hitler is a good man. He didn’t do anything wrong’. This is a fairly standard alt-right troll comment, and Cernovich explained it to a baffled Infowars set as such.

The elements of the alt-right that the globalist media are using to spook the normies hate figures like Mike Cernovich. Daily Stormer, for example, attacks ‘Thernovich’ (he has a lisp) so often they have a tag for articles which refer to him. The elements of the alt-right movement who obsess about race see figures like Cernovich, Milo, Lauren Southern and Gavin McInnes as opportunists, shills for Zionism, or both. They dismiss such figures as the ‘alt-lite’.

These ‘alt-lite’ figures would describe themselves as cultural libertarians (Milo), civic nationalists (McInnes) or just economic nationalists (Cernovich would probably fall under this category). They don’t talk much about race beyond criticising the cultural Marxist left’s obsession with it. They certainly don’t talk about Jewish influence in the media, banking, entertainment industry, academe and politics, although sometimes they skirt the topic. Such topics are central, however, to the alt-right.

What is most interesting is how much the globalist media is focusing on the alt-right. The senior editors and their elite handlers who determine the news for normies know how propaganda works. If the establishment wanted the alt-right to go away, they would not give it the oxygen that it gets. If the MSM really wanted to undermine the alt-right movement, they would give a profile to exactly the people the alt-right hate the most: people like Mike Cernovich. Instead, the media is magnifying and amplifying the alt-right’s profile. That seems strange, wouldn’t you agree?

It’s almost as though the globalist media is egging on the LITERALLY HITLER alt-right at the expense of the more moderate, more centrist and more appealing alt-lite. Makes you wonder, especially when it was the globalist arch-witch herself Hillary Clinton who took the term mainstream. Some of the alt-right’s intellectual leaders are also suspiciously well-funded.

How deep down the rabbit hole are you prepared to go?

In my view, the alt-right is appealing to younger white men in particular for several reasons. The first is that white men for the last fifty years under the yoke of New Left cultural Marxism have played the same role Jews played in the national socialist ideology of 1930s Germany. White men are the untermenschen of postmodernity, and we’re sick of it. The historical record has been so distorted and perverted against white males by neo-Marxist intellectuals, that when young white men begin to learn of their rich heritage of accomplishment and greatness they become massively disillusioned with society. All was lies, and the pursuit of truth leads further and further away from the mainstream narratives that underpin the normie worldview. Once you realise how much you’ve been lied to and how much the ruling elite hate you, you’re quite ready to believe that maybe even Hitler did nothing wrong.

Another reason young white men are drawn to the ideology of ethnic nationalism is that we can see that we are being replaced. It doesn’t take much investigation into the plans of cold-blooded globalists like George Soros and the reach such oligarchs have in our political, economic and propaganda systems to realise that our group is on the way out. We built modernity, thank you very much, and now it’s time to exit stage left. In our workplaces, suburbs, city streets and in TV and film we can see that we are a disappearing species. The future belongs to Mindy, not Doogie Howser.

A constant barrage of media gaslighting such as when the ABC regularly ‘debates’ whether gender quotas should be introduced only works to further the destruction of our sense of self. Until, that is, you take the red pill and become fashy af.

Once young white men take the red pill and begin reading alt-right ideas, every cultural Marxist hitpiece on their demographic only furthers their perception that ZOG is out to get them. Are they wrong?

If we are living in Weimar Australia, an economically depressed period (at least outside the FIRE economy) of cultural malaise, moral corruption and miscegenation, then what comes next? Are we doomed to repeat Germany’s tragically wasteful, destructive and ultimately futile path of the mid-twentieth century? Is the alt-right being groomed for just such a purpose?

No matter what the alt-right and the other fashy goyim think, Hitler did plenty wrong. On top of the undeniable atrocities (the figures of which may be disputed), totalitarian terror, economic central planning and unwarranted invasions, he destroyed his country. He was a disaster for Germany. His brief and calamitous reign ensured the expansion of the very internationalist oligarchic power that he spent so much time railing against. In the end, the money power that he said he was fighting was the main beneficiary of his dictatorship. He was the worst thing that happened to Germany in modern history.

International socialism won all of the wars of the twentieth century. Civilisation, liberty, human excellence and all that is noble and exalted in human life lost. We are still living in the backwash of all that misery, tyranny and ennui.

This leads to another, and even more disturbing question. Did international socialism win World War II because that was the plan all along? If so, what’s the plan for us then? Are we goosestepping our way to the final globalist checkmate?

Is this why the elites have worked so hard to give so many white people brain AIDS?