Christine Blasey Ford, after carefully going over her memories of Kavanaugh copping a feel thirty or forty years ago, has remembered an even more terrifying incident which took place at a picnic she attended with the judge and one or two or many more friends a few days later.

“I remember the incident with absolute, one-hundred percent clarity,” said the tearful psychology professor. “Brett Kavanaugh invited every single woman in America to a church picnic. And they all agreed to come along, thinking it would be a fun, caring, loving event. But, straight after the egg-and-spoon race, Kavanaugh raped us all. Every single woman in America was raped by Brett Kavanaugh that afternoon. I get upset just thinking about it.”

After the assembled media gave an impromptu minute’s silence to commemorate the victims, Republican senator Lindsey Graham cleared his throat and asked whether it would be practical for a single male to rape one hundred and sixty million women in the course of one afternoon, even taking daylight-savings into account. Senator Graham’s impeachment hearing is set down for tomorrow morning, first light.

Powerful corroborating evidence has been supplied to the committee which is expected to confirm Kavanaugh’s guilt. Video footage of an old bearded coot in a red suit lounging smugly in a sleigh was tendered. A grim and grizzled Democrat senator Diane Feinstein growled:

“If a sot like Santa can force-entry every house in the world in a single night, how easy would it be for an evil judge to ram his gavel up two-hundred million sacred chimneys over a long lazy afternoon?”

Feinstein then dramatically rose from her chair and gestured to the sisterhood gathered supportively about her:

“And just look at these women! Mature, educated, professional women. Brett Kavanaugh obviously raped them all — how else could anyone explain their hysterical caterwauling, their maniacal eruptions of foam-flecked hate screeching? Obviously something very traumatic has taken place here… Probably twice with Kirsten Gillibrand.”

There appears to be only one piece of evidence that may work in Kavanaugh’s favour. As of the time of printing, Diane Feinstein was still claiming to be a woman. Which would mean she attended the picnic. However, six separate FBI investigations have previously confirmed that it is physiologically impossible for any male, of any age or species, to attain an erection within a three kilometre radius of the elder stateswoman.

This decidedly ugly wrinkle aside, the nomination execution is set to roll on tomorrow as scheduled. 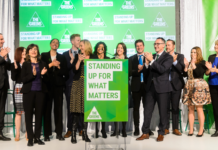 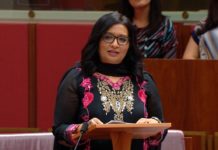