The XYZ understands that Facebook plans to utilise the latest facial recognition software, perfected by the CIA and some of the world’s biggest casinos, to monitor the facial expressions of users for microagression, racism and gender conformity. It is believed this groundbreaking technology will be applied to both the photos users share on the platform, and to the thoughts and feelings they express as they use Facebook, through a hijacking of inbuilt cameras in phones, Ipads and computers.

A Facebook employee spoke to us on condition of anonymity. They described how there are several levels of sophistication to Facebook’s photo software:

“At its most basic level, we have programs that can analyse the location of photos people put up of themselves to determine if they are unsavoury characters. If they present themselves at a firing range, NASCAR event, a Trump rally, at church etc, it is pretty easy to flag their page and start shadow banning their content, surreptitiously undo their privacy settings to encourage lefties to harass them, etc.

“A level up from there is to analyse the clothes users are wearing. Spotting a red MAGA hat is easy enough, but conservatives also tend to be fitter, and take more pride in their physical appearance and dress more appropriately than leftists, so we can make pretty accurate assumptions about people’s political leanings and ensure we limit how much they can share fake news articles.

“The next stage is where things get interesting. Facial recognition software has developed to the point where we can tell if someone is a racist or a bigot just from the look on their face. If a white person has pride in their ethnic origin, we can tell – self-hate shows itself all over the body, so if our software perceives an insufficiently obsequies countenance, we can actually alert authorities to potential thought criminals.

“Similarly, if a white person is photographed next to a black person, but has an expression on their face which indicates that they do not have the correct balance of respect for the black person’s history of oppression, a desire to ally themselves to help fight systemic racism while being aware that they they are only allowed to speak about this when they are asked specifically for their opinion, and wven then it doesn’t matter, we can ensure that educational institutions are alerted to their problematic thinking so that it can be corrected.

“The final stage is the one we are most excited about. Most people don’t know, but the terms and conditions agreement, which people just click on but never read, allows us to use the inbuilt camera on their devices to monitor their facial expressions in real time. Thus we can monitor their thoughts and feelings as they scroll through their newsfeed, read articles linked by Facebook, and chat with their friends on Messenger. So for example, if someone responds positively to a picture of Trump, or negatively to a picture of Hillary Clinton, even without them commenting or reacting on the site, we’ll know which way they swing.

“Ultimately, we see ourselves coordinating with the government to send all this information, on basically every person on the planet, to one central location where authorities can determine if someone is guilty of thoughtcrime and is in need of reeducation.”

When we suggested to the Facebook employee if he thought this sounded literally like something out of George Orwell’s 1984, they responded:

“We don’t read anything written by the alt right.” 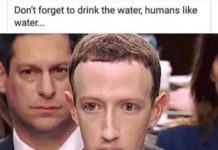