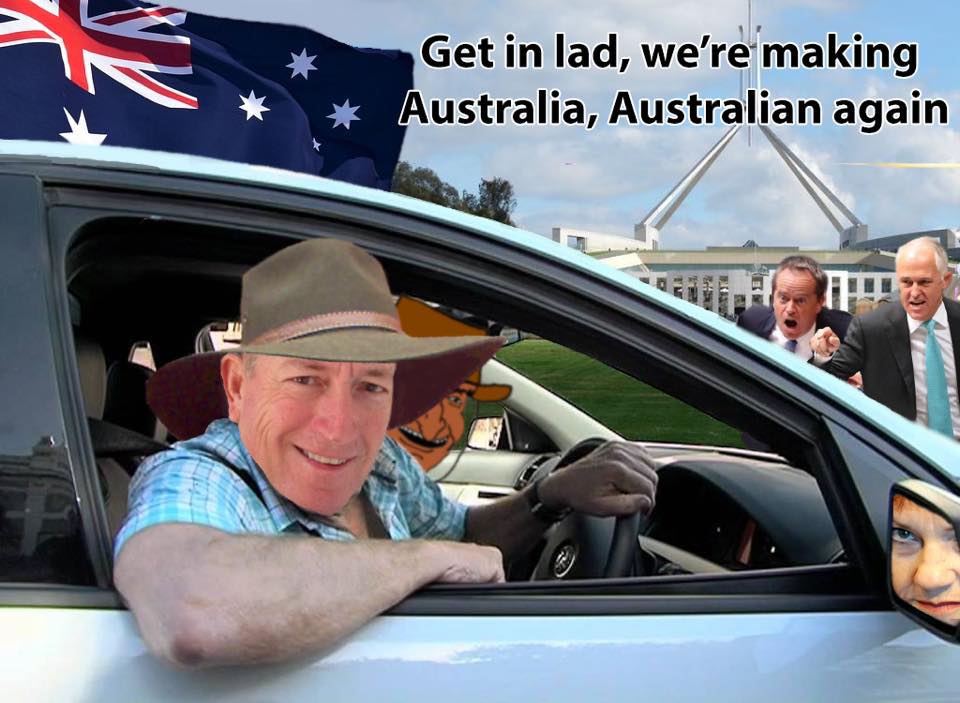 Apparently the title of this article is made up of one of the most offensive terms imaginable. Hard to believe, I know. But our language has been hijacked by an ethnic and religious group, a foreign group at that, and they have decided that certain words of the English language, our language, can no longer be used in any format.

Senator Fraser Anning made his maiden speech in the Australian Senate this week. It contained over 5000 words, many of them about his life and his time living and working in the Queensland countryside. But it was a single sentence that has caused almost the entire parliament to come together in a show of support for their total animosity to the words that he used and to the message that he hoped to send.

“The final solution to the immigration problem is of course a popular vote.”

This sentence followed a long and detailed explanation by senator Anning on his proposal for the problem of overpopulation through immigration in Australia. His approach was measured, circumspect and sensible. As such, it will be ignored.

We know it will be ignored because it is being ignored now. Instead, the entire media and political class is up in arms and furiously virtue signaling their hatred for the words in the quoted sentence that the senator spoke. According to the prevailing consensus these words prove that the senator is a Nazi. All because he used the words, final solution.

Attack the man, not the argument. This is the preferred approach of frauds and charlatans everywhere. They cannot attack his arguments on their merits so a great whirlwind of drama must be created around the words that he used, even though the words themselves in the context used are meaningless in regards to any association with National Socialism or the Jews.

Our old friend Sherry Suki, the new token brown person in The Australian’s opinion pages, has proudly written a piece to educate us white Australians on what our own history is.

“Most Australians were shocked and many upset by his insensitive reference to a “final solution”. There are few more offensive terms imaginable and, as Greg Sheridan wrote yesterday, he either uttered those words with wicked intent or in stunning ignorance. In any case, almost all Australians would no doubt oppose a ­racially discriminatory migration policy.”

On behalf of ordinary Australians everywhere let me set the record straight:

We are not shocked or upset by his use of the words, final solution. If anything we are dismayed that our language is being held hostage by an event that occurred 70 years ago on the other side of the world and which had nothing to do with us.

The number of more offensive terms is of extraordinary length. The fact that Suki, a foreigner, is attempting to tell Australians what we think is far more offensive to us than anything that the good Senator stated in his speech.

He neither utter the words with wicked intent nor in stunning ignorance, for the simple fact that Senator Anning is most obviously a man who does not go around agonising over what words he is or is not allowed to use by his so-called moral superiors on the prog left and right.

And finally, it might come as a shocking surprise to Suki but the majority of Australians, real Australians; not these foreign invaders, without a doubt would completely support a racially discriminatory migration policy. That is why we want the persecuted South African white farmers to be granted immigration status, but we want a complete halt on all Muslim, Asian and black invaders coming to our country.

We are also in complete support of the Senator’s proposal for a popular vote on the matter, as long as voting is restricted to those born in Australia to white Anglo-Saxon parentage going back at least three generations.

Anning is completely correct that this is the final solution. It is the final civilized and peaceful solution. After that, all bets are off and those who are running around now in manufactured outrage would do well to remember that. Otherwise they may find that they will really get that which they are pretending to be so afraid of.

There was only one part of Senator Anning’s speech that really disappointed me:

“In the 1960s, both Liberal and Labor parties reflected a common framework of Judeo-Christian values, supporting the family as the basic unit of society, both supported the principle that marriage was a union between a man and woman, and both parties recognised the sanctity of the lives of the unborn.”

Sigh. The rot has really set in deep.