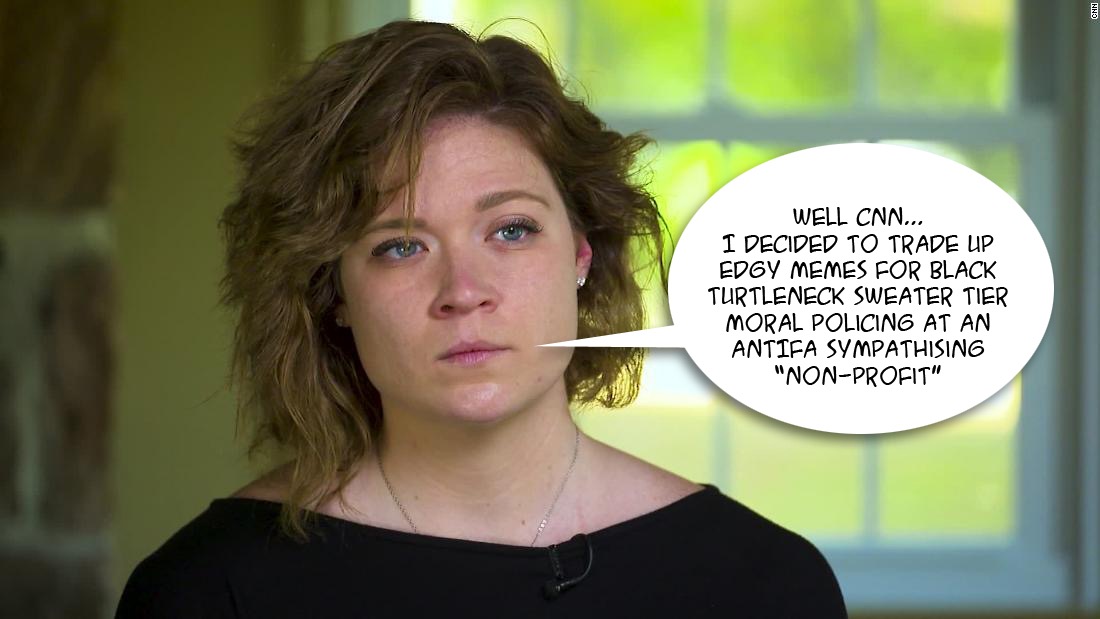 Elle Reeve, the VICE propagandist who helped amplify Christopher Cantwell’s high IQ energy to international audiences, has published a piece over at CNN about somebody called Samantha:

It had taken Samantha six months to go from a vaguely liberal non-voter to what she calls “a productive racist.” She is one of very few women who joined the alt-right, and an even smaller number who left and are willing to talk about it. Her story helps explain what draws people into this movement, and the misogyny that drives it…

Samantha, now 29, was open about her past in her interviews with CNN, but asked that her last name not be used to protect her and her family from possible violence or retribution. She now rejects white supremacy, and has joined Life After Hate, an organization that helps people leave hate groups…

Samantha and her former IE [Identity Evropa] friend both say the alt-right was like a cult, in that it separated people from their families and friends and demanded total ideological adherence.

“Like any cult, they want to expose you to as much as they can, but not so much you just turn away,” the woman said. The one difference is that there’s no single leader who dictates the culture and doctrine. Instead that’s created and enforced by largely anonymous people on message boards and in chat rooms, each one trying to one-up the others by posting more cleverly racist and cruel jokes.

Now far be it for me to accuse Elle Reeve and her fellow globohomo sycophants of co-ordinating like a cult to disconnect Alt-Right supporters from their extended family and friends by deplatforming them from most major social media platforms on the basis of thought-crime (aka “hate speech”).

I’m sure Samantha is just a naïve wingnut and totally not a Trotskyite entryist looking to pedal her story as another laughable piece of “hate defection” clickbait. I’m sure Donald Ewen Cameron’s depatterning procedure for behaviour modification is not embedded into the editorial process of an “authoritative news source” like CNN.

Yeah, totally nothing suss about this at all. Guess it’s time to join the suspect Life After Hate group Samantha joined, and pass the Kool-Aid?