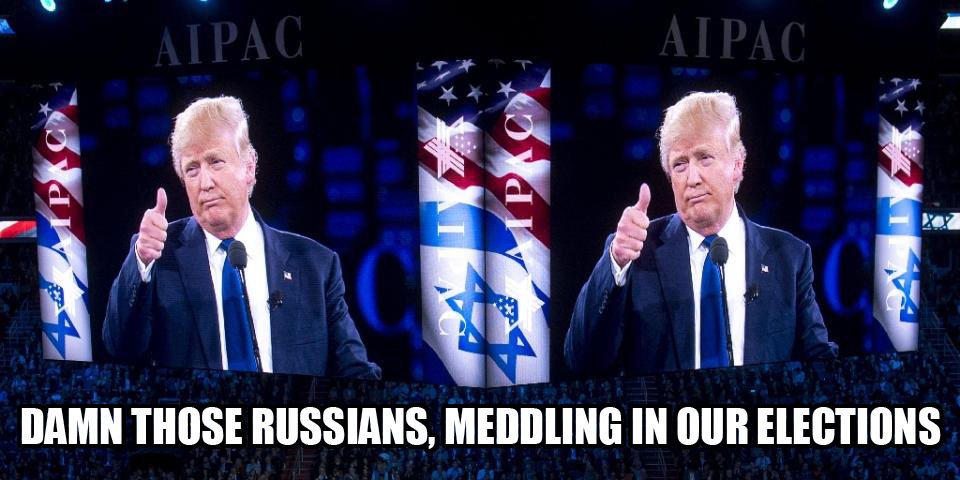 With Google news searches on “anti-Semitism” suggesting that anti-Semites are everywhere at the moment, President Donald Trump has decided to brand the Democrats the “anti-Jewish party” (smooth logic there Donald). AFP reports:

US President Donald Trump blasted Democrats as “anti-Israel” and “anti-Jewish” Friday after they passed a congressional measure opposing hate speech in general instead of specifically condemning alleged anti-Semitic comments by a Muslim congresswoman.

His remarks follow days of tense debates in Congress addressing sensitive questions about national allegiance, discriminatory tropes aimed at Jews, and accusations of show votes that failed to call out a member for controversial comments.

“I thought yesterday’s vote by the House was disgraceful,” Trump said at the White House.
The resolution was originally intended to deliver a direct rebuke of anti-Semitism following comments by a Muslim Democratic congresswoman, Ilhan Omar, that were deemed anti-Semitic and offensive by many colleagues.

But after blowback from progressives, it was revised to broadly condemn discrimination against Muslims and other minorities as well.

Trump seized on the shift, injecting a new angle of attack as he readies a 2020 re-election bid and fellow Republicans seek to claw back ground they lost in the House in last year’s mid-terms.

Meanwhile the talking heads at CNN are rolling out Democrats to counter signal Trump’s branding:

Never let it be said that the 2.2% of America (according to Pew Research Center statistics) who constitute a vast over-representation in media, politics and finance don’t have the American system wrapped around their little finger.

Hence why both Republicans and Democrats will mobilize American citizens as a proxy army for Israel at the drop of a hat, while certain outfits intentionally flood America with hostile non-White invaders.

“When Jews admit to the deliberate replacement of Whites in our own countries, and that this is pure evil, then start fighting with us to stop it happening, I may start to care.

Until then I’ll see cries of “muh anti-semitism” for exactly what they are: Anti-White bigotry.”