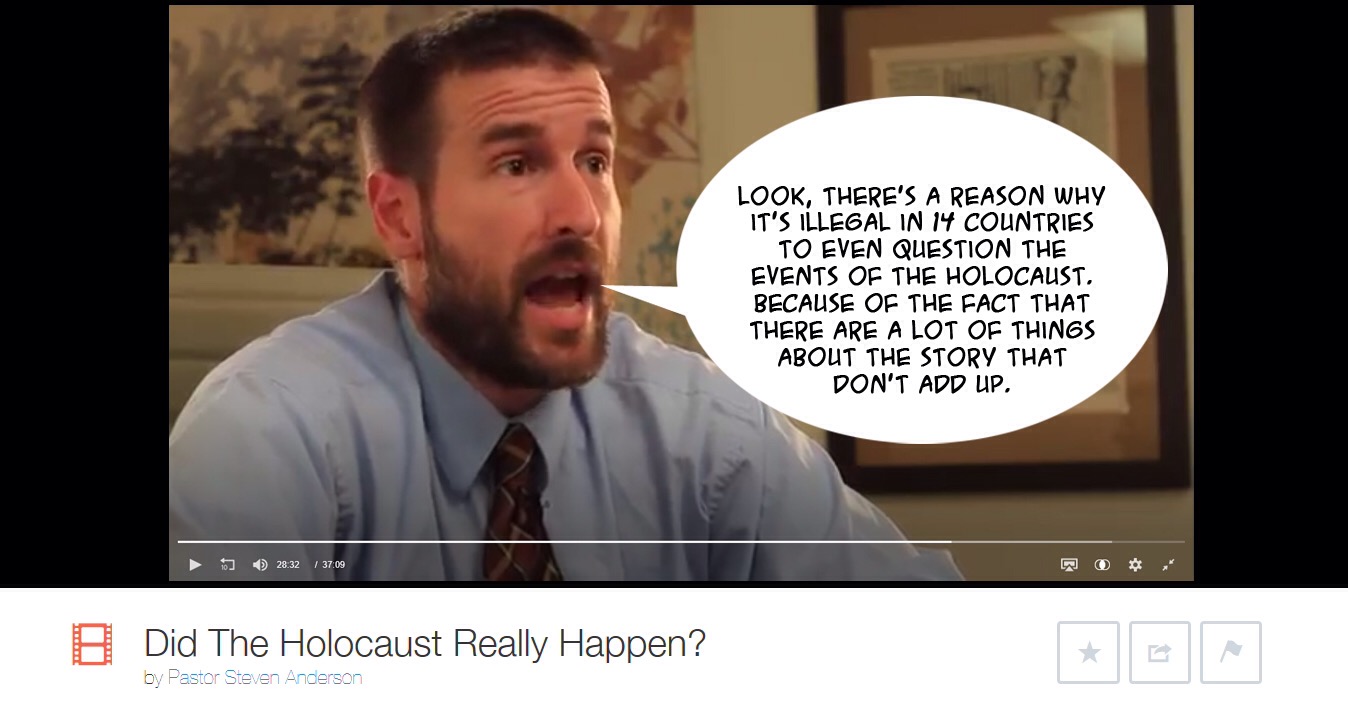 Pastor Anderson, who created a viral video entitled Did The Holocaust Really Happen? (which has been repeatedly chased off social media sites by dubious “trusted flaggers”), has caused him to gain all the right type of attention from the wrong type of people:

Steve Anderson, the anti-Semitic pastor of the Faithful Word Baptist Church in Tempe, Arizona, denies the Holocaust in a video he posted to YouTube last week, claiming that the millions of Jews who were gassed and burned in ovens simply died of hunger and disease due to forced labor and war.

In addition to arguing that it would be impossible for the Nazis to have cremated a million Jews at Auschwitz, Anderson claims that the slave laborers there got compensated for their work and could buy items at a commissary. He further asserts that Jews were able to play on a soccer team and act in musicals and plays at Auschwitz.

Anderson also promotes other anti-Semitic claims. He asserts that Hitler and Zionists had the same goal of getting Jews to leave Germany and then accuses the Zionists of working with the Nazis so that Jews would go to Palestine. He alleges that the Jews lied about the Holocaust so that the state of Israel could be created and asserts that Jews stole the land from Arabs and then put them in “a giant concentration camp known as Gaza.”

Geez, I wonder why so many people are identifying as counter-Semites and questioning the narrative of the ADL which is a “private intelligence agency, sending spies, infiltrators, disruptors, and agents provocateurs into the camps — both Jewish and non-Jewish — of those who disagree with its radically pro-Israel and Jewish supremacist agenda”.

Hence it is likely this ban of Pastor Anderson from Australia is instigated by a certain group of dual citizens adverse to truthful types of thought-criminals speaking truth to power:

The Executive Council of Australian Jewry has argued that Irving’s conviction in Germany, open arrest warrant from Austria, recent deportation from Canada and the likelihood that he will breach state anti-racist laws here are all relevant.

Arguing that “freedom is threatened in this country, as it is in Germany by those such as Irving who incite the gullible to racist violence,” Leibler urged the government to follow the example of Canada and deny Irving entry into Australia.

Now far be it for me to question the integrity of the Executive Council of Australia Jewry (ECAJ), but the unbelievable gall of Leibler to have accused people as thought provoking as David Irving, as is Pastor Anderson for that matter, as pandering to “the gullible” is almost laughable.

The ECAJ and ADL are the blue-pill dispensing functionaries of the globohomo system’s intelligentsia and they zealously seek to suppress the truth disseminated by men like Pastor Anderson and David Irving from toppling their hasbara house of cards.