The remainers in the UK are presently hard at it attempting to convince everyone that the recent EU election result is actually in their favor. The delusion simply knows no bounds but this is unsurprising. What did people on our side think they would do? Roll over and admit they were wrong and be welcomed into the fold? Perhaps retire gracefully into that good night?

They’re like the Black Knight in that Monty Python film who tries to call it a draw after he’s had all four limbs hacked off.

It’s also important to remember that over 2.5 million EU citizens living in the UK voted in the election last weekend. Every single one of them would have voted for parties that favored the remain side because their continued residence in the nation depends upon it. These people won’t get a vote in the next British general election which could be not very far away at all seeing as how the Tories are in fits trying to come up with a new leader.

But not only did they vote this time but they actively agitated for Britain to remain in the EU.

Chatting with voters in a small town in northwest England ahead of this week’s European elections, lawyer Sophie Larroque’s French accent is hard to miss.

The MEP candidate is one of several European expatriates making the leap into politics in Britain, spurred on by their opposition to Brexit …

… Larroque, 40, works as a legal adviser in London, a job made possible by the EU-enabled mutual recognition of university degrees.

Determined to fight Brexit, she founded the UK EU Party with three British friends in April, despite having no political experience.

They raised the £15,000 needed to register candidates in three of the 11 British constituencies.

She has travelled almost daily from her home in London to northwest England, where she is hoping to be elected.

Foreigners agitating in important elections that may well decide the sovereignty of the host nation? If only one piece of evidence is needed as to why the EU is a very bad idea indeed then this would be at the top of the list.

Many Europeans hoping to become one of Britain’s 73 MEPs are targeting their three million fellow expats.

The 44-year-old is a candidate in the East Midlands for Change UK, a pro-European party formed only this year by lawmakers who defected from the two main parties.

“This is my home, I have three British children and I do not need a British passport to defend Britain’s place in the EU,” he said.

These reasons for getting the hell out sure are stacking up, eh what old bean?

Jan Rostowski is another candidate targeting the expatriate vote — although unlike many others, he has more than enough political experience.

He served as finance minister in Poland and briefly as deputy prime minister, and is standing for Change UK in London, where he was born and raised.

He has been out campaigning in Ealing in west London, home to a large Polish community, but has his sights set higher than these elections.

“One of the things we want to do is give to EU citizens the right to vote in British elections,” he said.

I have no doubt at all that this Polish prick would be aghast at the idea that Brits could come in and vote on important matters in Polish elections.

There is also a by-election in the UK this weekend and the odds-on candidate to win that seat is from the newly victorious Brexit party. At this rate he’ll be a shoe-in. The latte-set living in the London bubble would read the quoted article and see absolutely no problem with it at all. Which is the entire problem in a nutshell.

I have a feeling that some people are going to be in for a rude shock. Speaking for myself, a British national living in the Netherlands whose life will be slightly inconvenienced should Britain finally leave the EU, all I can say is bring it on, guv. The last thing I will ever do is put my personal circumstances before that of my nation. 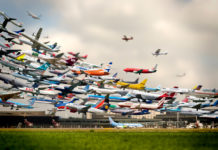