The other day there were slightly more Chinese students outside Melbourne Central Station than usual:

I know what you’re thinking. Who are these people, where did they come from and what are they doing in my country? They are Chinese students, bringing the internal divisions facing their own country and making a big deal of it smack bang in the middle of Multicultural Melbourne.

The rally began at 7pm outside the State Library in Swanston Street and the numbers swelled until there were more than 1000 people, at least half of whom appeared to be pro-China protesters.

The demonstration began with an acknowledgement of the Wurundjeri ancestral owners, but before the pro-Hong Kong organiser could get through the first line a cheer broke out at the perimeter and a Chinese flag was held above the crowd.

If a gun was pointed at me and I had to pick a side… well, I just did. Anyway, there is as yet no gun pointed at my head, so I don’t care. This is a domestic Chinese matter and it not my problem, nor should it be my country’s problem. This country was literally founded to keep these people out so that it wouldn’t be our problem.

Under the gaze of the statue of Sir Redmond Barry, Hong Kong protesters gathered on the north side of the library lawn, singing and chanting “free Hong Kong”.

A pro-China demonstrator yelled out “if you don’t like it, leave the country.”

Another yelled back “we’re in Australia.”

We spent the first 200 years of our country’s existence sorting out the differences between our English, Welsh, Scottish and Irish forebears, and as David Hilton has pointed out, if we had had another 200 years we may well have been able to assimilate immigrants from our southern European neighbours. Alas we’ll never know, because diversity is our strength or something. We learned nothing from Ned Kelly:

“Now Sir Henry I tell you that highway robbery is only in its infancy for the white population is been driven out of the labour market by an inundation of mongolians and when the white man is driven to desperation there will be desperate times.”

Similarly, there has been a spat over in America and the Holy Land over some middle aged fat Arab who wants to visit some old fat Arab.

After the Israeli government agreed to allow U.S. Congresswoman Rashida Tlaib entry into the West Bank to visit her relatives during an overseas humanitarian trip, the Michigan Democrat says she’s now changing her plans amid widespread outcry, slamming Israeli leadership for their initial ban.

“When I won, it gave the Palestinian people hope that someone will finally speak the truth about the inhumane conditions. I can’t allow the State of Israel to take away that light by humiliating me & use my love for my sity” — grandmother — “to bow down to their oppressive & racist policies,” Tlaib, who is Muslim and of Palestinian descent, tweeted of her planned visit with her grandmother.

Who cares. Except we have to, apparently, because our American brothers let her in to their country and their system allowed her to grab some political power. Hilariously, Tlaib and fellow far leftist Ilhan Omar had wanted to make a big deal out of the Israeli treatment of their co-religionists:

Both Tlaib and Omar are also outspoken critics of Israel’s treatment of the Palestinians. Tlaib’s family immigrated to the U.S. from the West Bank. Omar has been accused of anti-Semitism for previous remarks about Israel, but has apologized for her comments.

Responding to criticism over the snubbed visit, Omar, a Somali-born Muslim, tweeted Friday that had their visit gone as planned, she was set to hold meetings with Arab and Jewish members of Israeli’s Knesset along with Israeli security officials.

“Then, the delegation was going to receive a briefing on the Bedouin community in East Jerusalem,” Omar added. “Then the UN was going to brief us about the effect of humanitarian aid cuts on Palestinians.” Omar said plans for a video conference with Gaza youth members was also on the books.

I say “hilariously” because Jewish organisations have been instrumental in shaping America’s non-discriminatory immigration policy and in pushing so-called ‘multiculturalism’:

“There is also evidence that Jews, much more than any other European- derived ethnic group in the United States, have viewed liberal immigration policies as a mechanism of ensuring that the United States would be a plural-istic rather than a unitary, homogeneous society”

At some point it stops making sense to undermine the homogeneity of your country’s number one backer.

How much simpler would this have been if there were no Arabs, Jews or Muslims in America? Donald Trump would never have tweeted that Israel should not let the two Squad members in, because they wouldn’t exist and nobody would care. Actually, nobody does care. Except our political establishment for some reason. I say kick them out and they can sort things out on their own turf.

Over in Europe, our brothers are tying themselves in knots trying to figure out what to do with returning rapists and head-loppers.

The White House and State Department are pressuring governments in Europe to take back thousands of jihadis and their brides captured when ISIS collapsed – and having no success.

Officials are pushing governments including those of Boris Johnson, Emmanuel Macron and Angela Merkel to take back their citizens – and to guarantee that they will not be allowed to roam the streets unchecked, a source familiar with the conversations told DailyMail.com…

The jihadis, their wives and children are all held in territory in Iraq and Syria held by U.S. allies, with American military aiding their detention. Among them are two of the ‘Beatles,’ the British citizens turned ISIS killers who beheaded American hostages in gruesome videos.

One source familiar with the push to get the jihadis repatriated from what is effectively U.S.-controlled territory said that it was causing tensions with European capitals but framed it as the result of those countries’ immigration policies – a point unlikely to be agreed with by European leaders.

‘That’s going to cause some difficulties. They’re not going to be happy about that. But you get the jihadis you invite in sometimes, and now you have to learn to deal with them,’ the person said of Donald Trump’s push to get rid of them.

Funny that. You would think if Donald Trump really was a white nationalist he would either insist that Islamic terrorists should stay in the shitholes they tried to overrun or better yet, just execute them, instead of foisting them upon our European brothers.

More to the point, these “returning” jihadis would never have been Europe’s problem if they and their families had never been let into Europe in the first place.

In sum, we should be building Death Stars and fleets of Star Destroyers with which to conquer neighbouring star systems. Instead we are paying for gender affirmation surgery for Mohammed’s disabled lesbian spontaneously combustible dolphin. 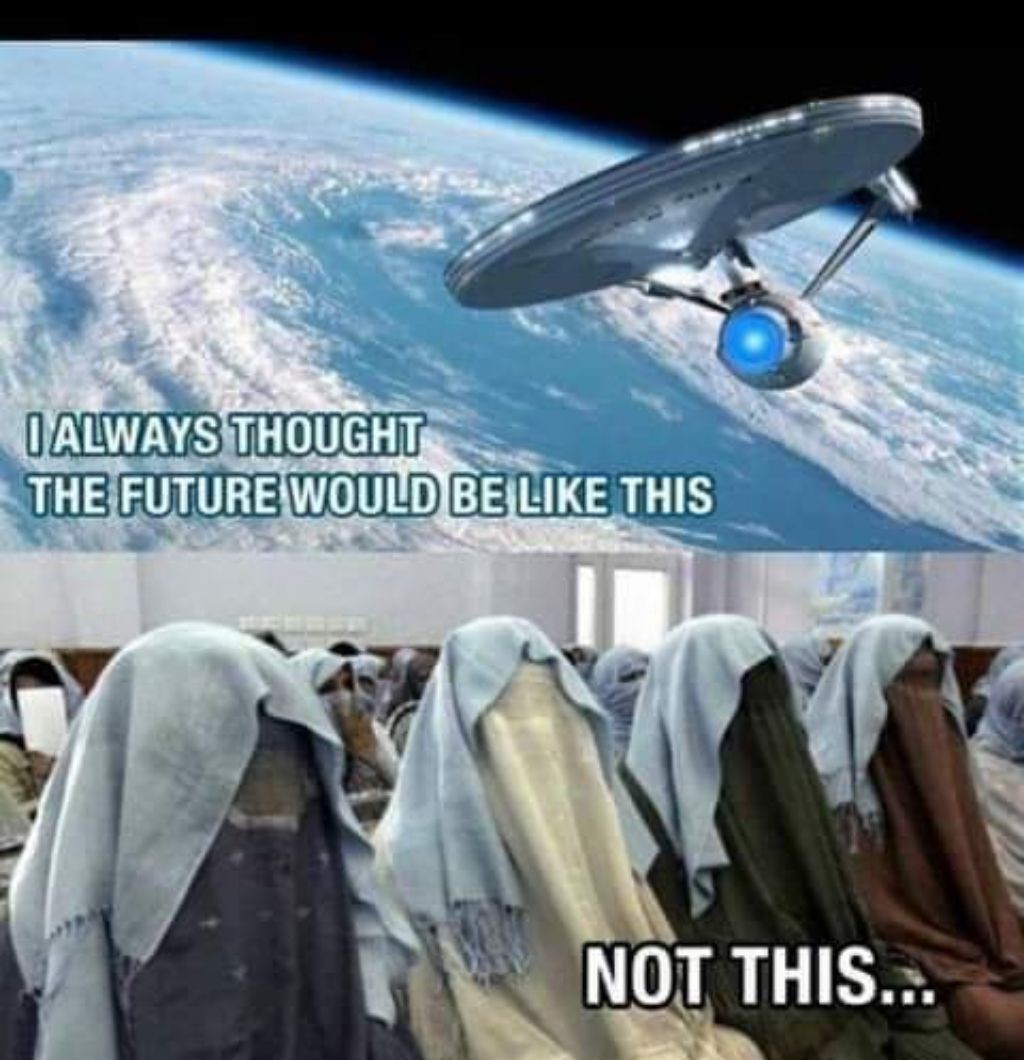