They did it, Gab’s hosting provider pulled it’s service. We now all suffer because of the actions of one person whom we all denounce.

The banning comes in the wake of a man shooting up a small Synagogue:

POLICE have charged a man over the shooting of 11 people at a suburban Pittsburgh synagogue.

Robert Bowers, 46, is accused of the mass shooting, which also left six people injured. Two victims are in a critical condition.

The FBI will lead the investigation, with Bowers charged with a hate crime and other criminal charges. Police found an assault rifle and three handguns at the crime scene.

It seems from initial accounts Robert Bowers just really didn’t like Jews and felt the need to go and hurt some people for their ethnicity and religion. His views are his views, you can agree or disagree, but what we all need to agree on is that initiating violence against otherwise innocent individuals is wrong.

One individual committed a crime that no reasonable person would say was in any way justified, yet now we all suffer for his actions. That is not justice, nor is that moral.

It’s not just the domain registrar who decided free speech was beyond the pale:

PayPal banned social network Gab.ai on Saturday, following reports that the suspect in the Pittsburgh synagogue shooting had published a number of anti-Semitic posts on the site, which is popular with conservatives and the white nationalist “alt-right.”

Gab allows free speech, therefore it’s Gab’s fault that some idiot shoots up a synagogue. Notice how according to Cnet, Robert Bowers “published a number of anti-Semitic posts on the site, which is popular with conservatives and the White Natioanlist “alt-Right.” This is the author attempting to connect National Socialist Jew hatred to all conservatives, and the “alt-right.”

Anyone who disagrees with the Left, censorship and globalism is a “nazi” or “far-right” or “alt-right” – never forget that.

I wonder if the Leftist Establishment will sit back and analyse whether it was censorship and pushing this fool into his own echo chamber that finally set him off. Hah! As if the mainstream are capable of even the slightest bit of self-reflection.

They will use this is as an excuse to silence even more people. And on it goes; first they came for Alex Jones.

There is only one person responsible for the actions of this man and that is Robert Bowers. His actions do not justify the silencing of hundreds of thousands of people, nor does it justify an attack on the livelihood of Andrew Torba and his family.

The Left are using this tragedy to silence hundreds of thousands of peaceful people who just want to speak our minds. They are malevolent, there is no level they won’t stoop to in order to silence opposition.

Gab will be back and it will be bigger than ever, free speech will win. 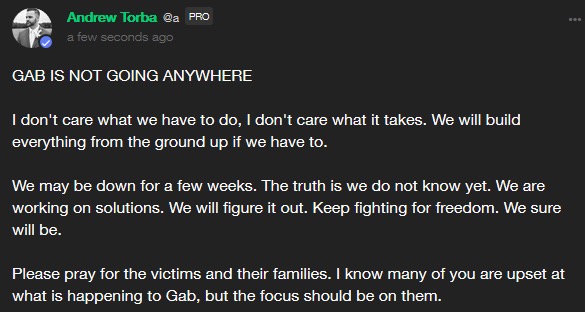