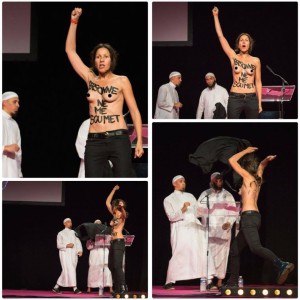 What a contrast these two brave, actual feminists make, to the self-entitled and juvenile complaints of the western sisterhood. Whereas the so-called feminists of the west are committed to finding evidence of sexism in jurisdictions with laws preventing it, and have nothing much at all to say about the numbers of their own gender being actually oppressed, often to the point of death, in Islamic countries – these two courageous women have risked their lives in solidarity with Muslim women across the world.

Whilst western feminists can whip themselves up into a frenzy over a Prime Ministerial wink that no one actually saw as it was during a radio program (http://www.abc.net.au/…/wink-prompts-greens-to-call…/5471688), they fall strangely silent when it comes to women being compelled to walk around covered in black sheets a step or two behind their husbands, or being prevented from driving, or being forced to sit separately to men in public places in a modern form of segregation that would attract trade sanctions and furious comment in any other cultural context, and on the list goes…

Enter the two women, one Algerian and the other Tunisian, here pictured. They courageously gatecrashed the “Muslim Woman Salon” event being run and organized by men! in France in mid-September, clothed in black Islamic dress, even as two imams were dazzling the audience with their rhetoric. As the stunned imams looked on, the two women whipped off their hijabs in a symbolic flourish that should be cheered by women everywhere, to reveal a message of freedom and defiance written across their flesh – “No one submits me, nobody owns me, I’m my own prophet!”

The two brave young women were then escorted from the conference centre by police as representatives of the religion of peace shouted for their deaths. These are two feminists we can wholeheartedly support and admire, engaged in an actual struggle for rights, and staging a public act of defiance against the real and actual oppressors of their gender.

The supreme irony, tragedy in fact, is that, rather than symbolically tear off the hijab and stand in solidarity with genuinely oppressed Muslim women, as these two courageous women have done – western feminists are, perversely, far more likely to actually put on a hijab in solidarity with, not their oppressed sisters, but the religion that enslaves them (http://blogs.news.com.au/…/dailytele…/comments/bat_in_a_hat/).