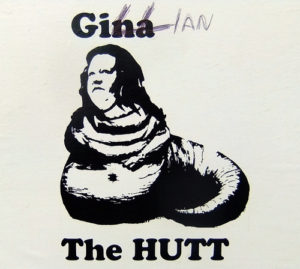 As a counterpoint to Jeremy Morgan’s article Most Hated Woman’s Wealth Slumps, published yesterday, I would say that Jabba benefits from the legacy of Lang Hancock – her father who married the Filipino maid turned drug whore Rose Hancock – Porteous.

Gina’s wealth is derived from Lang’s astute business acumen. Having said that, Lang who was active in the 60’s onward built his fortune with iron ore at a very low price. Iron ore was maybe $10 a tonne in 2001. Then the Chinese boom kicked in and the commodity price soared, so capitalisation through hundreds of billions (this is a fact) of investment into new mines, rail (400km + for Rio and the same on a similar route for BHP and I think Fortescue do the same too) from the Pilbara mines to Port Hedland. Then they spent a fortune on port expansion too – culminating in BHP’s planned $40 bn investment to built the harbor and docks a full 2 km into the sea off Port Hedland (due to capacity constraints – that plan is now scrapped).

Now, Gina-Jabba did not operate mine during the boom. She simply owned leases and let others mine her leases collecting hefty royalities. All the work of Lang. When she was valued at $30bn that is how she got that wealth – through hard work and astute business, just her father’s not hers. Of course, credit where it is due – Gina-Jabba got into the mining business – she opened her mine, Roy Hill, last year. Right at the bottom of the price cycle. Basically, her (70% ownership) and her investors spent tens of billions ramping up a new mine and associated infrastructure. Brilliant business it is not – the mine is in danger of operating at a loss – precisely because people spent vast amounts endlessly expanding production (supply) of a commodity while blind to the fact that demand would plateau – and that it did.

In short, while mines can generate vast wealth and jobs, I loathe the stupidity of the investments that devalue the commodity, I loathe the government decisions to tax a boom revenue while not treating their own budgets as extraordinary boom budgets (and still failing to balance them in the boom). What I will say is that unfettered capitalism will reward the Langs of the world who create wealth, crush the Ginas of the world who squander it, and socialise the governments that cannot balance a budget.