The XYZ has spoken to a fictional character in the climate change scientific community, who has expressed concern that not enough people believe in climate change any more. Like most attention-seeking publicity-whore narcissists, this lack of attention has led to feelings of anxiety so great that it can be compared to dying:

“I literally can’t take it any more. Tony Jones has blocked me. My blog is haemorrhaging page views. The global warming pause is killing us. It’s enraging.”

This state of emotional desperation has led to equally desperate lines of thought:

“Some of us in the AGWTB community, not me, obviously, but some of us, have suggested that the only option may be to start suicide bombing for science. You have to admit, it would be a brilliant strategy. We could murder climate change deniers, and then blame for being murdered.

“Imagine if we could do this on a worldwide level? It would be genius! The Islamic State, in league with Cultural Marxists, have shown the us the path to achieve the wildest dreams of every misanthropic greenie on the planet.

“Not that I would ever endorse such a policy, of course…” 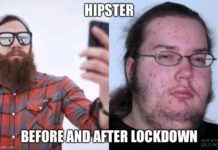