A GoFundMe page which was established on January 20, 2019, titled Senator Fraser Anning Supporters Re-Election Fund has been shut down by GoFundMe for breaching its Terms & Conditions.

The page, established by Brendan Ritson, had raised nearly $1000 dollars from about 28 donors, and Senator Anning’s office had been notified of the campaign. 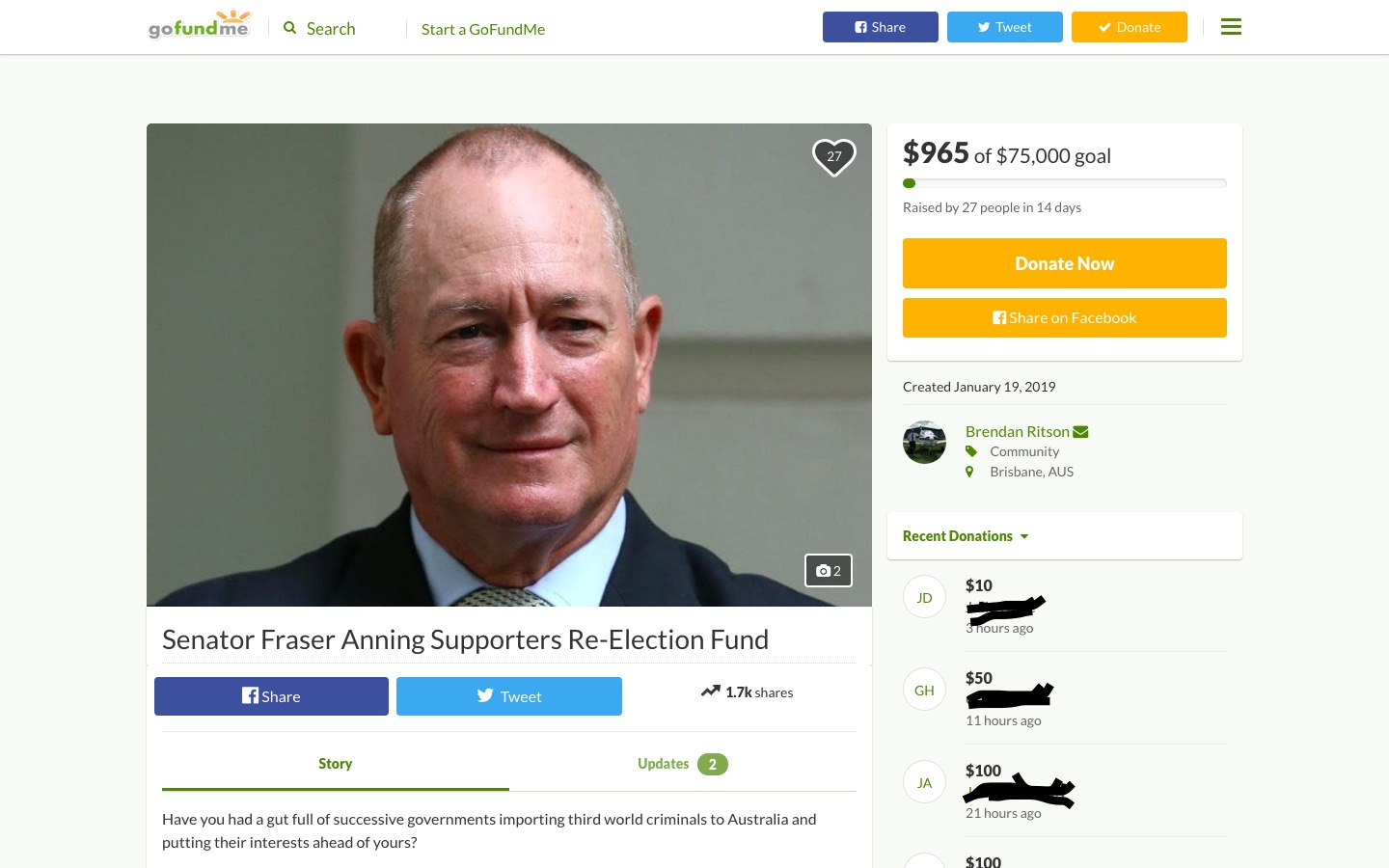 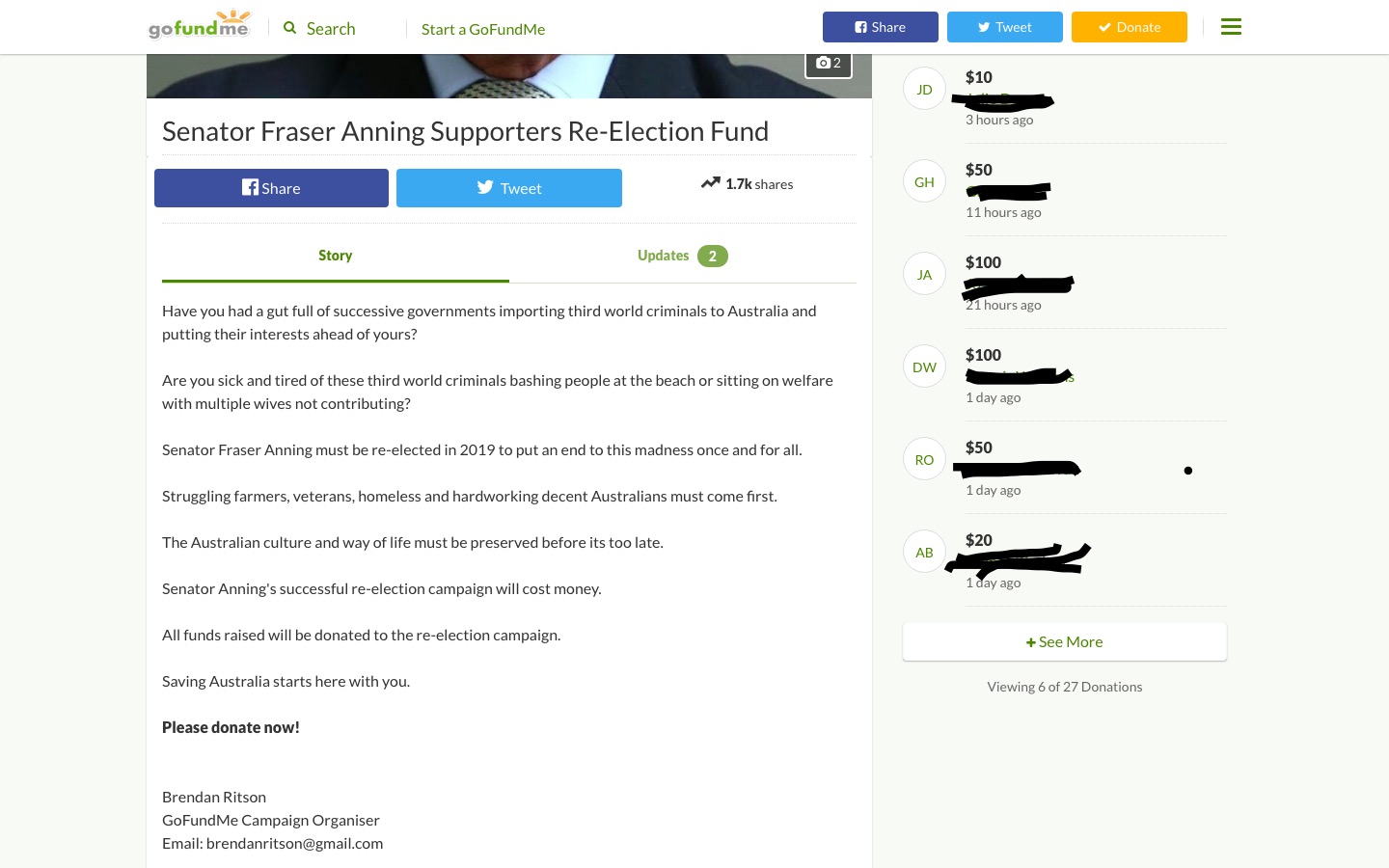 The campaign was ‘shared’ around 1700 times on Facebook and on other websites. 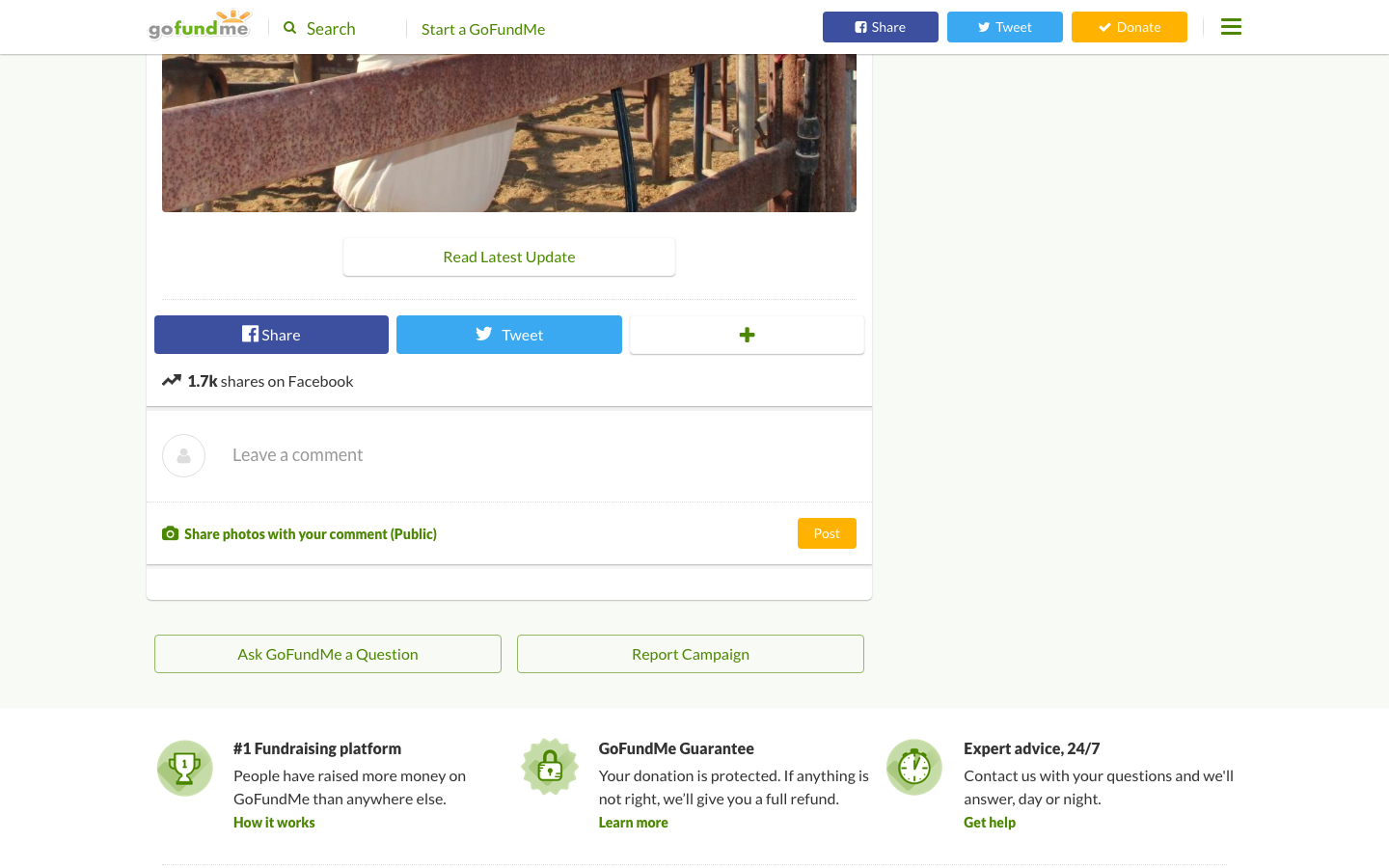 According to Mr Ritson:

“The campaign was starting to gain traction and had raised almost $1,000 from about 28 donors. The funds had not been withdrawn from my GoFundMe account.

“On 6 February 2019, without any forewarning, I received an email from GoFundMe informing me that my GoFundMe account has been removed due to a violation of their Terms & Conditions.

“GoFundMe claims that any donations made to the campaign that have not already been withdrawn have been refunded and will be returned to the donors within 3-7 days, however I have no means of verifying that claim.”

Mr Ritson has since had his own donation to the fund returned, and (update) GoFundMe has confirmed that all donors have been reimbursed.

“On 6, 7 & 8 February 2019, I sent emails to GoFundMe requesting particulars of the alleged violation of their Terms & Conditions, however GoFundMe has not responded to me (see attached).” 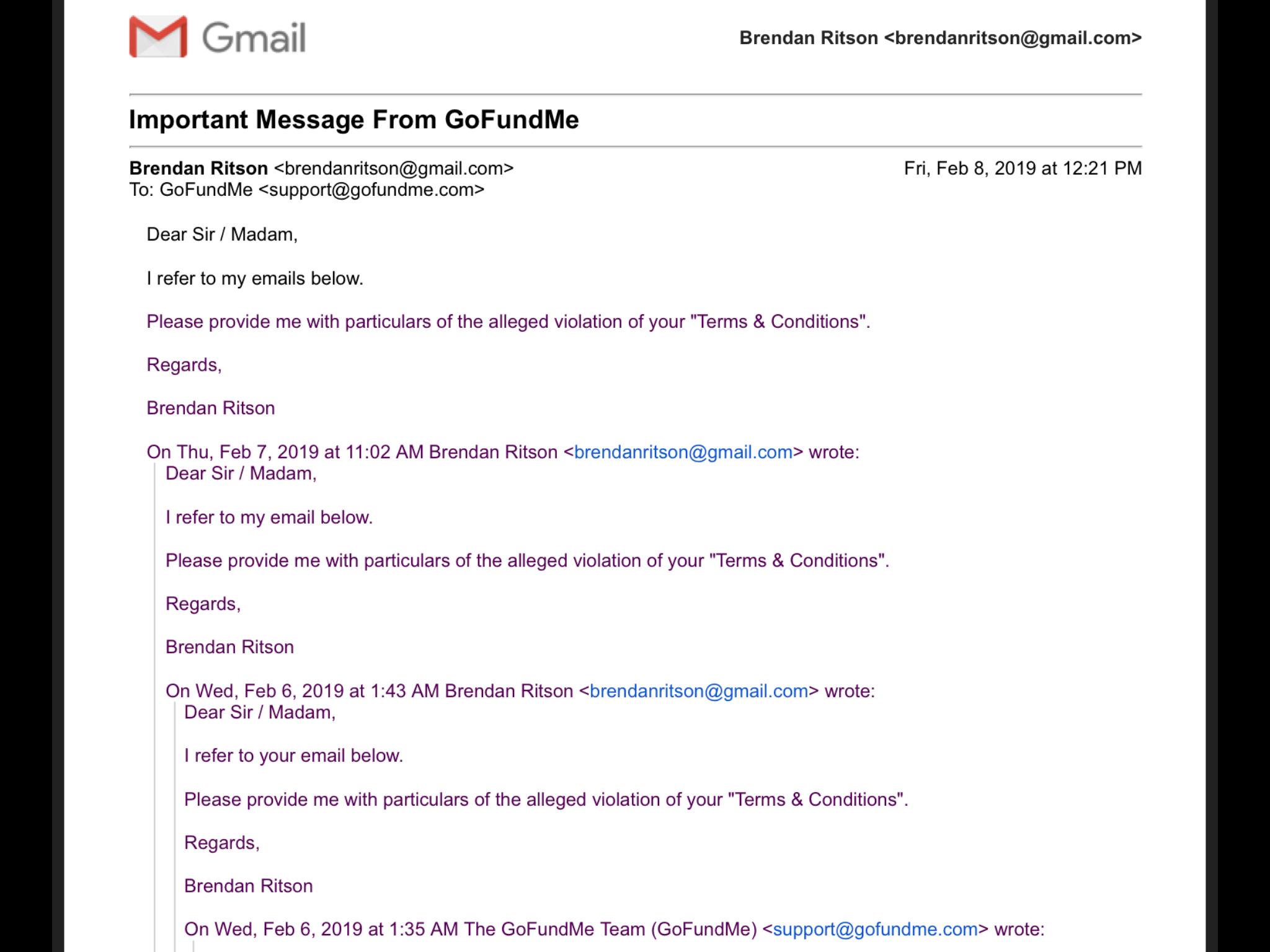 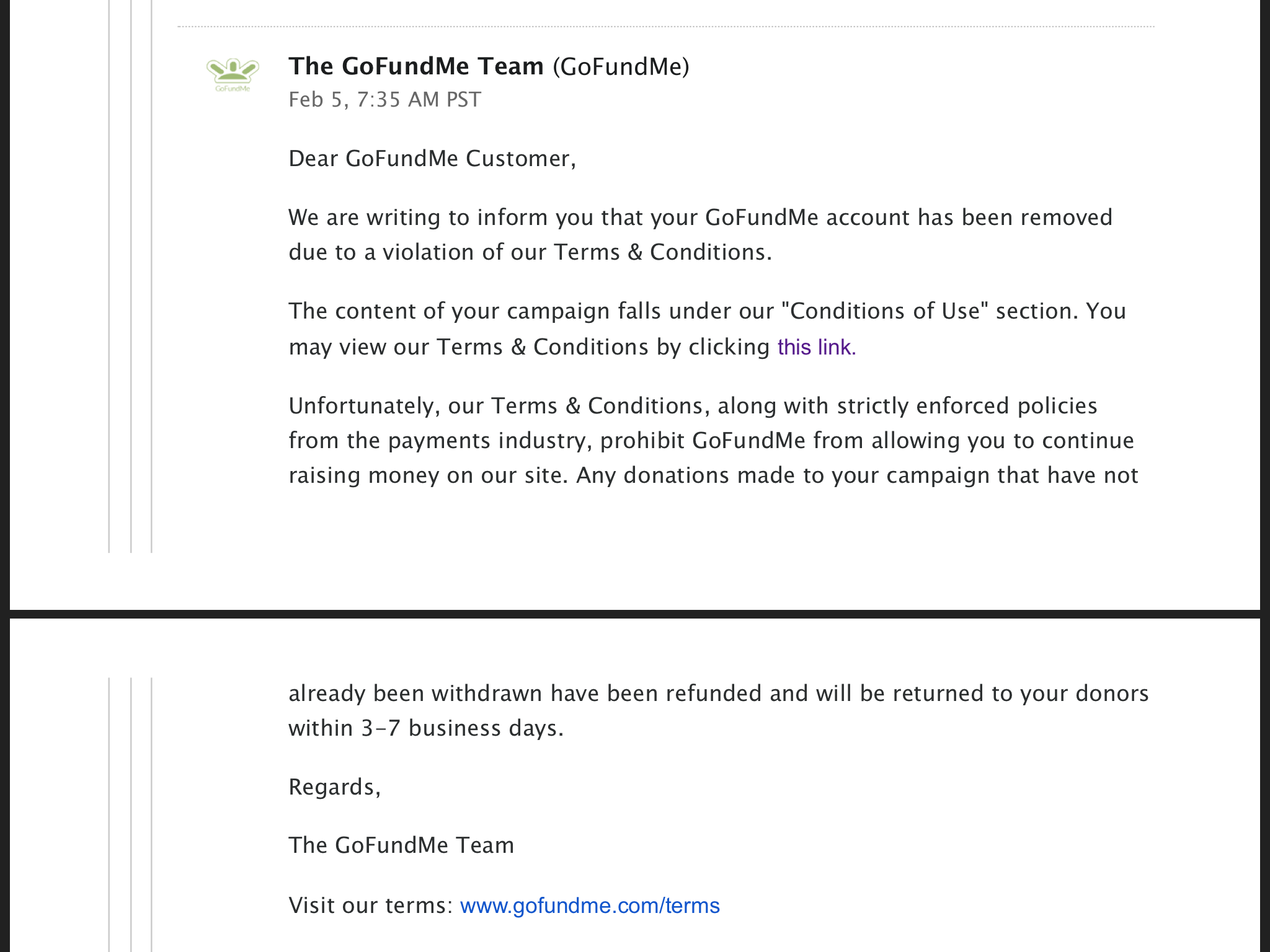 The “terms and conditions” which are referenced here could be the following prohibited acts:

2. any election campaigns that are not run by a registered organisation within the supported country…

8. campaigns we deem, at our sole discretion, to be in support of, or for the legal defence of alleged crimes associated with hate, violence, harassment, bullying, discrimination, terrorism or intolerance of any kind relating to race, ethnicity, national origin, religious affiliation, sexual orientation, sex, gender or gender identity or serious disabilities or diseases;

However, as Mr Ritson has not received a reply to his query from GoFundMe, we cannot currently verify if this is the case.

“In the circumstances, I am concerned that the removal of the campaign by GoFundMe is politically motivated.

“As you may know, discrimination on the basis of political belief or activity is unlawful in Queensland where I reside under section (7)(j) of the Anti-Discrimination Act 1991 (QLD).”

You can view the Queensland Anti-Discrimination Act 1991 here.  The XYZ has queried GoFundMe to find out if they knew that Senator Fraser Anning was a democratically elected member of the Australian federal parliament, but we have not so far received a reply.

Mr Ritson has since established a new campaign fund at My Cause, to which supporters of Senator Anning are free to donate.