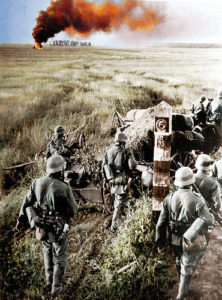 When Adolf Hitler invaded the Soviet Union in June 1941, launching the titanic struggle that would alter the course of World War Two, the Western democracies were blessed with the perfect opportunity to destroy both national socialism and international socialism. We could have let them both duke it out and stayed the hell away. Instead, because Western governments and Western media were infested with communists, “Uncle Jo” was depicted as a good guy and the USSR was sent material aid in a desperate bid to slow the German advance.

Communists ever since have tried to take credit for the defeat of national socialism, but aside from ignoring the fact that communism killed 10-20 times more people than national socialism, they conveniently forget the fact that without British and American support, Moscow may well have been taken by Christmas 1941 and the Russians definitely would not have had the machinery to push all the way back to Berlin. Without Western intervention, the human meat grinder that was the Eastern Front could have stayed well out in the east, Patton could have rolled into Berlin some time in 1944 or 1945 and taken the rest of Eastern Europe shortly after, the Iron Curtain could have split the Ukraine down the middle, Mao would have died of sheer boredom in a mud hut in 1951 and the rest of us could have gotten on with moon landings.

I have similar thoughts whenever Hawthorn take on Carlton.

And when I see journalists in the mainstream media complaining that social media giants are killing the fourth estate:

“The royal commission into financial misconduct has highlighted the problems of “vertical integration”, where banks buy related financial services firms, increase their market power and hone their ability to extract money out of unwitting customers.

“The problem is arguably worse in the market for internet search and social media, where the digital leviathans Google and Facebook have stamped out competition and amassed unparalleled information about their customers, underpinning growth in revenue that only cements their position further.”

All true. But it is a nice set up. The mainstream media literally determines what stories are deemed newsworthy or not, which topics are considered mainstream and which ones are “fringe”, and it influences the overlying narrative which shapes how we view the world. That is an awful lot of power. I wonder if we will see some self reflection from Adam Creighton?

“The Australian Competition & Consumer Commission’s landmark investigation into the tech giants’ impact on the media’s ability to fund quality news and analysis, which would make recommendations before June next year, couldn’t come soon enough.

“Over a few years to 2015, news­paper and magazine publishers lost $1.85bn in print advertising and gained $98 million in ­online advertising, not much of a ­consolation. About 2500 journalists have been laid off by Australia’s media companies since 2011, according to the media union, about a quarter of the total.”

And I thought Newscorp was in favour of the free market. This is Stalingrad. I just wish the battle would drag on. The media does not fund quality news and analysis. It funds globalist propaganda which has distracted us while our countries rack up completely unsustainable debt levels, and our native European populations are replaced by whoever our unscrupulous governments can get their hands on.

Australian journalists are the people who have systematically failed to inform us that Marxist activists have been the driving force behind pretty much every so-called “progressive” social movement we have seen. They should all lose their jobs.

Creighton even has the audacity to quote John Howard:

“I’ve long had the view that three things we need in Australia to remain democratic is a robust parliament, an incorruptible judiciary and free media, even though on occasions it’s a pain the neck,” former prime Minister John Howard told The Australian last month.”

Well, the parliament has sold out our country to the Chinese and ruined our two greatest cities with mass immigration. Our “incorruptible” judiciary has become obsessed with identity politics and is forgetting its core role of providing justice, not solutions. And our free media needs to be burnt to the ground.

“That free media is coming under great pressure, as the digital duo scoop up the revenues that were once used to scrutinise government and business…

“When the emergence of an industry has the potential to kneecap the fourth estate, which performs a broader social function, it’s time to ask: do we want a strong private media in Australia or do you want the Nasdaq index to hit a new high?”

Reading between the lines, this has nothing to do with big social media and everything to do with you, dear reader. The Dinosaur Media is scrambling because ordinary people are reading globalist rags less, and getting their news from other sources. They are doing everything they can to get us to to consume their products again and stay on the plantation. Google and Facebook are themselves evil, owned and run by people from the same globalist elite who own and run the Dinosaur Media. But patriots have been able to use the technology big social media has provided to spread information and grow networks that will challenge the globalists in big social media and big Dinosaur Media. A reader who regularly earns himself Quote of the Day had this to say:

“In light of providing platforms which strip the elites of their monopoly control over ideas, is it any wonder governments of the world have been cracking down on social media companies?

“If you think the grilling of the Zucc by global governments is because of the data breaches you’re not paying attention.

“Zucc is getting grilled because he promised his data mining and algorithmic control would ensure victories for the elites, and when it didn’t – but rather unintentionally did the opposite – they needed to drum up a presentable reason to shut it down.”

While we are fighting a war for the existence of our nations, our culture and our people, the elite are fighting a war amongst themselves for power. We should be wary of getting involved. We should resist the urge to call for government to break up big tech or introduce regulations to make it easier for alt tech. That is what crony capitalists do. Leave that to the market, and let government, big social media and the MSM all freeze in the Russian snow.

On this note, you can follow The XYZ at the following social media: