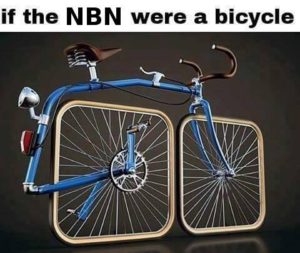 I have had two conversations on social media recently in which I have argued for free market broadband in Australia as the answer to repeated government failures in that sector. I won’t offer my credentials as some sort of trump card, and will let my arguments speak for themselves.

Here is one, the other I will post soon. The other party has been made anonymous. Spelling and grammar have been corrected:

Mr. B: My Labor-voting mate says the Labor system would shit all over the Lib’s NBN. He did explain the two but I cant remember exactly the difference. Can anyone enlighten?

Dean Hamstead: Choice of technology is irrelevant. Re-nationalising broadband is never going to work out.

Mr B: Nationalising the network to be used by private providers is a good model though.

Dean Hamstead: Like how roads are clogged with cars made in the private sector. Great model.

Mr B: How will privatising roads solve that? Traffic congestion is caused by poor planning and public transport policy.

Mr B: Networks are monopolies. Private monopolies are inherently inefficient. Look at the price of housing or private electricity networks, and the anti-competitive behaviour or the old private phone network.

Mr B: But how do you make monopoly networks competitive? That’s the problem. Telstra monopoly ownership of the phone network inhibited competition in the phone and internet retail sector because they favoured their own retail services.

Dean Hamstead: And before anyone says “but muh overbuild”, why is it a problem if people can choose from cable, fttn, fibre or wireless? And they can bail on one if it sucks for them. Like in normal business where Canberra doesn’t decide for you.

Mr B:  Anyway, I’m pretty sure the NBN is going to be privatised once it’s complete. It’ll be a regulated private monopoly like the electricity network, and like Telstra’s copper network was before it.

Dean Hamstead: Laws that blocked building infrastructure were holding back roll-outs. So NBN got special status that allows them to run over councils and residents to install shoddy crap infrastructure.

Dean Hamstead: The electricity fiasco is a fantastic example of how regulated pricing just screws people over. What’s needed is real competition  .

Mr B:  Monopoly networks cannot be competitive; they have to be regulated. Building duplicate networks is hugely expensive for everyone. They are only affordable because the cost is so widely shared.

Dean Hamstead: That’s why I’m against a monopoly NBN.

Mr B:  But networks can’t be competitive unless they are duplicated, and that makes them too expensive. There are no cost advantages of private over government monopoly once the cost of the necessary regulation etc of private monopolies is accounted for. There’s no perfect solution (I work in regulatory economics).

Dean Hamstead: I disagree with you entirely.

Mr B:  Yeah, I can see that. We probably don’t need to keep debating it. Have a good day.

Dean Hamstead:  When you’re a hammer, everything looks like a nail. So it makes sense that you believe regulation is the answer. It’s much the same that lawyers think more laws will fix things. My view is that we have great engineers with cheaper and better technology every year, and money is cheaper than free from 1/4 of central banks. So get government out of the way and let them compete to build the networks people want.

Either way, LTE is going to savage NBN in the same way that mobile phones have savaged fixed line telephony.

Mr B:  Duplicate networks will always be more expensive because fewer people (customers of each business) are sharing the cost of the same physical amount of infrastructure. It’s simple maths. Geographic monopolies are the only cost-effective way to run a network. You can have it unregulated if you like, but they’ll price-gouge because they can. Or you can regulate, but they’ll still try to price-gouge where they can. There’s no perfect solution.

And if LTE will ever outperform fibre for bandwidth and cost, it will be far in the future. What do we do in the meanwhile? (Mobile has shrunk but not eliminated fixed line telephone. You can’t run call centres or huge switchboards over mobile, it costs a bomb and has insufficient bandwidth.)

Dean Hamstead: Will they be more expensive though? Really? Once the fixed asset is paid off, it’s just maintenance. Or the company doesn’t pay it off and just services the debt. Let’s say that the cost to install a service into a household is $3000 (which is roughly what NBN is claiming, and is the install cost of TPG400 for business). At current interest rates (4%, but business can get lower) that’s $120 per year per customer or $10 per month. Which is far far far cheaper than what NBN charges. Realistically 2% interest is probably achievable, which is about $5 per month in finance charges.

Dean Hamstead: That’s also on top of cost of customer acquisition – companies will build out to service new customers if it costs less than their marketing efforts.

Mr B: That install cost would include the economies of scale of a heap of shared infrastructure. And the network cost also includes heaps of ongoing operational expenditure, which also has the benefit of economies of scale. With duplicate networks, the per-house cost goes up considerably because you lose those economies of scale, especially if you are covering the same geographic area. And if you’re not, you don’t have enough competition so the networks can price-gouge and customers have no choice but to pay. (This has been the problem with private internet networks in the USA.)

Dean Hamstead:  If you’re concerned about “overlap”, consider the overlap in customer service, billing, support, metering etc that result because of inability to vertically integrate. Having end-to-end control dramatically reduces costs and hugely improves customer experience. NBN is proving that just like Telstra did. I stick with Optus cable or TPG fibre because I only deal with one provider who can’t blame anyone else. They’re also both cheaper and faster. Problems in the USA have been as a result of government protection of monopolies.

Anyway, this is an interesting conversation but I have to do other stuff today so I might leave it there.

Dean Hamstead: I’m saying that when government decides the best model, the result is always the same: unreliable services with ever-increasing prices and having to “know someone” to get things done. Exactly like NBN and electricity in Australia. It’s not even hypothetical, it’s literally happening right now.

Dean Hamstead:  If you want the best outcomes for people, you keep government small and let free markets work.   Look at air travel; no one would argue that deregulation hasn’t driven down costs and made travel more affordable. How ridiculous would it be to propose a single government monopoly fly all the planes, and other companies just market tickets and load baggage? Then to promise every flight will cost the same. And yet we have done so with NBN.

You might argue similarly “what’s the point of Coles and Woolies? They sell the same things!” – then propose a single chain of grocery stores that sells every brand. “But no one would build in a small town!” you might argue… its obviously ridiculous and yet it’s what NBN has done.

Government has a role, sure, but the umpire shouldn’t kick the ball, nor should he move the goal posts and you absolutely shouldn’t replace the players with umpires.

Mr B:  You are not distinguishing between networks and services. Airlines are services. Airports are networks. Airports in Australia are private monopolies adding heaps to the cost of flights. Well-regulated airports would promote competition in air travel and lower prices for travellers. So would well-regulated comms networks. The well-regulated private electricity networks (Vic and SA) are the cheapest in Australia. Unfortunately poor retail competition inflates costs anyway. But that’s a direct result of a reluctance to regulate price disclosure. (Energy retailers obfuscate prices to gouge disengaged consumers.)

Dean Hamstead: SA electricity is the most expensive ostensibly in the world and is ridiculously unreliable now.

Dean Hamstead: They’re connected, though; government has forced a business model that doesn’t work effectively for consumers. By your own admission, in fact.

Mr B:  The network cost is not a part of the problem in Vic and SA. Not connected.

Dean Hamstead: From the consumer’s point of view, they buy electricity. That there is a company producing it, a company running a grid, and another selling it is irrelevant to them. They just want reliable power at the lowest possible price.

From your comments it seems that such a model works great for the grid, but isn’t working for retail. I would add that government messing around with production is also causing huge problems. This government enforced business model is benefiting some parts of the market, screwing others and screwing consumers.

At the heart of it, Government has decided that a single company cannot be allowed to produce, distribute and retail electricity. This business model is banned.

Which is what happens every time and is happening right now with NBN.

Photo by Dushan and Miae