Chatting to people here in Holland, their perception of Australia is that we are very hard on immigration. This false reality stems from them getting their news from the general mainstream media. Much like back in Australia we think that Europe has been completely overrun with immigrants because that is what we see on the news. 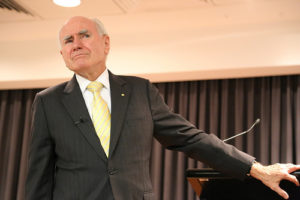 I have to explain to them that while we stopped the boats, and made a very big deal out of doing so, that was only a sideshow compared to what has been going on as regards to legal immigration into the country for the past 15 odd years. John Howard changed the immigration rules in the early 2000s, with the resulting change being that the average yearly migration rate since that period has been 210,000 people per year whereas previously the average was 70,000.

This change occurred in Australia with no effort to involve the Australian population in the decision or even let them have a say. Discussion was forbidden under the guise of political correctness. Any attempt to have the discussion was instantly dismissed as racist rantings on the part of the interloper stupid enough to inquire as to why we were bringing in hordes of second and third world peasants.

Every political party since Howard has been in cahoots with this new attitude. And up until now the mainstream media has been entirely complicit in the immigration agenda as well. But journalists tend to live in the inner areas of cities like Melbourne and Sydney, and it seems like reality is finally catching up with their misplaced ideology. That is the only explanation that I can come up with for a piece on news.com of all places titled, John Howard’s bait-and-switch: Is it time for a debate on the mass immigration ‘Ponzi scheme’?:

“Our cities are bursting at the seams, roads and services are congested, and house prices are skyrocketing — particularly in Sydney and Melbourne, which attract the lion’s share of new Australians.

“Over the last 12 years, Sydney has added 20 per cent to its population, or 800,000 people. Melbourne has added one million people over the same period, or 27 per cent.

“It’s clearly unsustainable,” said Leith van Onselen, chief economist with MacroBusiness. “The problem isn’t that immigration is good or bad, it’s just that the level is far too high for Australia to digest.”

“Howard never articulated why he was doing that, he just did it, and unfortunately the following governments, Rudd, Gillard, Abbott and now Turnbull, just followed.”

This is the sort of questioning line that we are used to seeing in publications like The Spectator or Quadrant, not news.com. Living standards have declined dramatically in Australia over the past 20 years under this relentless search for more people to move there, and all fueled by the desire for certain favored elements of the economy to benefit from the massive population influx.

A 30% rise in Melbourne’s population over that time period is beyond belief. The city was unlivable when I was there, which is more hilarious when you consider the fact that Melbourne routinely tops the annual “most livable cities in the world” garbage poll. It’s not just a result of poor planning that the city’s infrastructure is completely compromised. No city in the world that is already established would be able to cope with that sort of permanent influx over that space of time.

I will state it for the record that Melbourne and Sydney are not Australia. They are some sort of hybrid futuristic nightmare landscapes, completely detached from the Australian culture that exists outside their boundaries. But these multicultural megalopolises suck in the wealth of the nation as governments frantically attempt to patch over the ever widening cracks that these gigantic disasters are beginning to fall through.

Now the property bubble is starting to affect regional towns as well, as native Australians begin fleeing from Sydney and Melbourne. And all the while the city of Canberra, capital of the nation and home to the public service, sits serene and content in its exclusivity and wealth that is built on the back of the engorged salaries that bureaucrats now enjoy as opposed to those suffering in the private sector.

The great horror for Australian politicians of the last 10 years has been a potential downturn in China and the complete end of the mining boom in the West. To that end they have actively engineered a false messiah, equating the wealth of the nation to a continually rising population. But as native Australians are forced to watch their adult children trading in suburban backyards for tiny apartments in Chinese designed high rise apartment towers, slowly the penny is dropping for sections of the media as well.

The question is not whether the conversation will begin but if it is already far too late to have it.