Australian Greens leader, Richard Di Natale has stated today that he is expecting a Greens “breakthrough” at this year’s July federal election, and believes that a time will come soon when the Greens will hold government.

The Greens leader indicated that it is dissatisfaction with the major parties which is leading to an uptake of support for minor parties, and that the Greens could expect to be in a power-sharing government, including seats at the cabinet table within a decade. 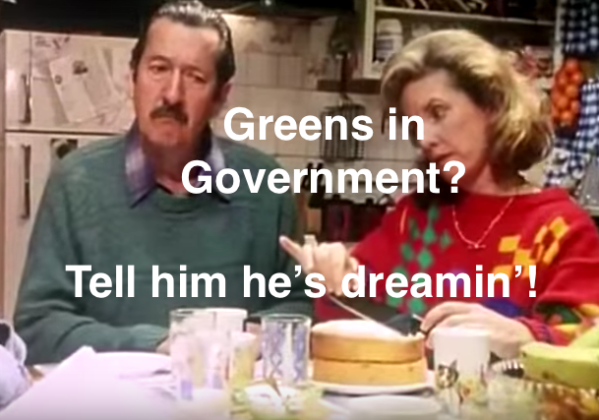 had a quasi Greens-Labor alliance under the disastrous Gillard Government which was formed in 2010, and there aren’t too many people who want to go there again – including the Labor Party itself.

With the exception of picking up a couple more seats in the Green-left inner city enclaves of Australia’s capital cities, the Greens haven’t got a hope.

But Richard Di Natale is right about one thing – the next election will most likely reveal strong support for minor parties; especially the recently formed Australian Liberty Alliance which only a few days ago announced its most recent senate candidate, rock musician and philanthropist, Gary “Angry” Anderson.

While this year’s election will no doubt reveal increasing dissatisfaction with the major parties and increasing support for minor parties, the political tide is going in the opposite direction to Dr Di Natale, the Australian Greens and their acolytes.

So will the Greens be in government in Australia within the next decade? The answer to this question is best summed up in the words of Darryl Kerrigan from the film ‘the Castle’.