Allow us to introduce The XYZ Aussie Legend of the Week, an Australian musician by the name of Deefer, who has some very sensible ideas about politics and has a knack for putting it to song.

He has a number of little rippers, like this one entitled “I’m a Leftie,” a song which sums up beautifully how socialist do-gooders do nothing but make things “progressively worse.”

He would also like to claim credit for coining the term “gullible warmist,” although he cannot lay claim to pioneering the t-shirt-over-skivvy look; that surely was a Victorian! 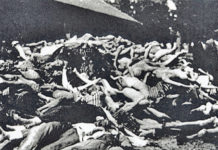